Who Holds The Blue Pencil? 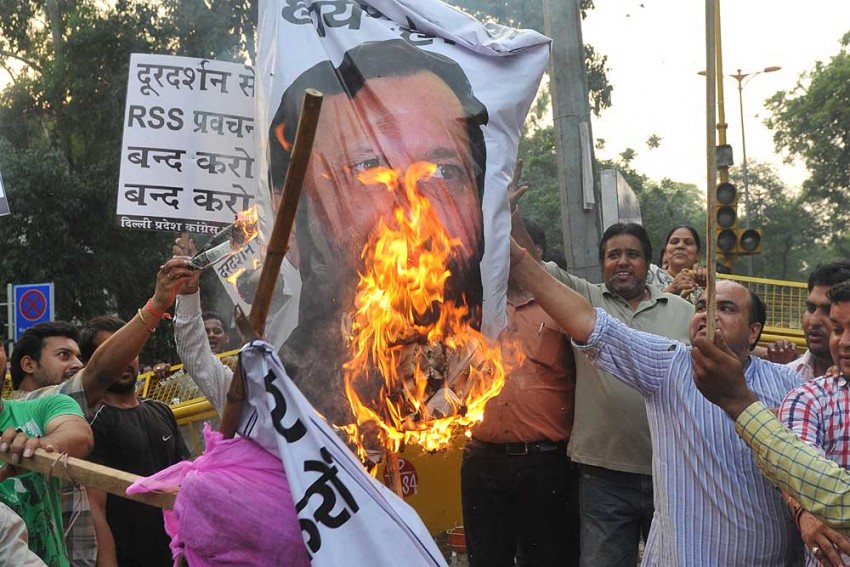 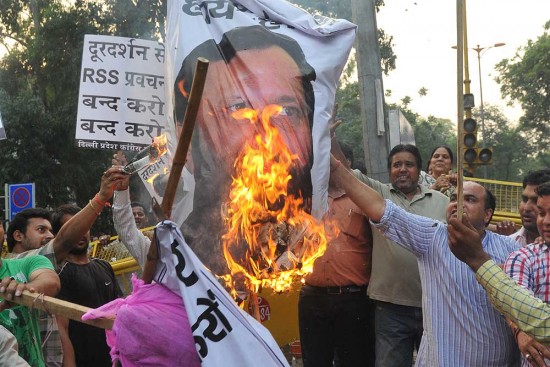 It was the last week of April. The UPA was in power but beginning to seem doomed. The election air across the country was rippling with Narendra Modi’s campa­ign. An interview with the opposition BJP’s candidate for prime ministership was a snatch any channel would have telecast within minutes of capture, if not live. Not Doordarshan. Not under the Con­gress-led UPA. The interview was recorded on April 27. It was telecast, yes, but after three full days—and allegedly with cuts—raising que­s­tions for the nth time about its suspect autonomy.

Cut to October 4, the big majority Modi government having completed 100-plus days in office: Doordarshan telecasts live the customary Vijaya Dashami address of RSS sarsanghchalak Mohan Bhagwat. This is unprecedented. Even during the A.B. Vajpayee-led NDA-I, the public broadcaster had never given live play to this flagged event from the calendar of the saffron organisation of which the BJP is the political arm.

Who’s the editor The pre-result Modi interview on DD

The clincher: on both occasions, Jawhar Sircar, the CEO of Prasar Bharati Corporation (which administers DD and AIR), said he was not in the loop. So who is deciding what is news in an organisation that is autonomous by legislation but beholden to the government for funds (which this year ran into Rs 2,400 crore)? It doesn’t take much cyn­icism to connect the piper’s tune to his paymaster. The chairperson and CEO of Prasar Bharati and the 31,600-odd employees of DD and AIR would fail to dispute that convincingly. And as A. Surya Prakash, a veteran journalist whose name is doing the rounds, gets ready to replace chairperson Mrinal Pande, he would have no illusions either. In any case, appointments to such posts are actually political decisions, though they go through the committee process. Surya Prakash is presently with the Vivekananda Institute, a right-wing think-tank in the limelight of late.

“There’s a fundamental design realignment which needs to be done as envisaged in the Act. It’s for the government to decide.”
Manish Tewari, Former I&B minister

No government, however, tires of idealising autonomy. One of the first comments Union minister Prakash Javadekar (who holds the information & broadcasting portfolio, besides environment) made was that the I&B ministry should be wound up. It is a relic of the Raj, and it has been wound up in the UK. Manish Tewari, too, had made some autonomy noises when he was I&B minister in the UPA government. Both ministers had also denied interceding, Tewari in the matter of the Modi interview and Javadekar in that of the Bhagwat speech. Tewari, who faced flak for delaying Modi’s interview, now says, “The chickens have come home to roost a little early. For all those who then raised the bogey of autonomy in Prasar Bharati, it is really for the government to work out the perceived lack of autonomy during the UPA time and the surrogate control that Prasar Bharati is experiencing now.”

Javadekar had also asked what was wrong with broadcasting Bhagwat’s address. Others, too, suggested the event was “pertinent”. An editorial in The Telegraph commented that DD had shown the Durga Puja in Belur Math and no one broke into a rash then, so why over this? The question that needs asking is not why Doordarshan chose to telecast Bhagwat or why it did so now but who decided on it and on what merit? From all accounts, it was ministry officials and Archana Datta, the new bureaucrat in charge of news.

Indeed, it has been through the bureaucracy that leverage is exerted on the broadcaster. It is not just a matter of ministry officials wanting to proclaim their loyalty to the government. The funds the ministry channels to the public broadcasters are administered by burea­ucrats in whom the process encourages habits of control. And so Prasar Bharati CEOs do not generally have the healthiest of ties with the ministry, find­ing themselves forced off and on to seek permission for the smallest of matters.

When Prasar Bharati decided to tie up with DW-TV, Germany’s public service broadcaster, for distribution of DD’s overseas channel by Hotbird-13B satellite, the deal very nearly did not happen. The reciprocal distribution arrangement between the two, which would take DD to 120 million households in Europe, Central Asia, West Asia and North Africa, was delayed by back-and-forth e-mails between Sircar and then I&B secretary Bimal Jhulka. Sircar kept pressing for a quick decision; Jhulka seemed in no mood to oblige, but finally did, just before the deadline spelt out by the German broadcaster expired.

“If DD and AIR are to remain media outfits, then they and they alone must be making decisions on matters that concern them.”
A. Surya Prakash, Tipped to be Prasar Bharati chairman

Insiders say this is a traditional turf war between IAS officers: Sircar, a senior in the service, had retired as secretary and Jhulka was the incumbent in that post. In the past, Sircar has given vent to his frustration on Twitter. Mails also reveal how Sircar has been seeking clari­fications on issues that plague the corporation—issues beyond programming.

“For 25 years, no recruitments have been made, no promotions given. Of the 49,000 employees transferred in 1997, when DD and AIR became autonomous, 1,500 retire each year. It is a corporation in name, a PSU in reality,” says a senior Prasar Bharati official. Among the inefficiencies in Prasar Bharati  comparable to that at some PSUs is that there are 17,000 engineers manning transmission towers that serve no purpose, the upkeep of which consumes crores. Sircar is learnt to have shot off e-mails with suggestions that the ministry shut down the towers. B.G. Verghese, a former Prasar Bharati member, says this makes the corporation “an engineer- and hardware-driven organisation” when it should be focusing on content. The corporation spends less than 15 per cent of its expenditure on content.

Current chairperson Pande says the time has come to decide once and for all whether DD and AIR are government departments or autonomous outfits. Part of the problem is the Prasar Bharati Act, which makes it incumbent on the corporation to seek the ministry’s approval on all matters. At least three committees, including the recent one headed by Sam Pitroda, have suggested changes in provisions of the Act to allow more autonomy and bring the focus on quality programming.

Surya Prakash too—like all incoming CEOs—has spoken about the need for a public service broadcas­ter and how it’s imperative to recognise DD and AIR as media institutions first and foremost. But it is actually for the Modi government to decide whether it needs a mouthpiece or a proper public service broadcaster, and whether it will really keep out of Prasar Bharati, DD and AIR.

By Anuradha Raman in Delhi

A Rash Of Pimples