Who Foots The Bill? 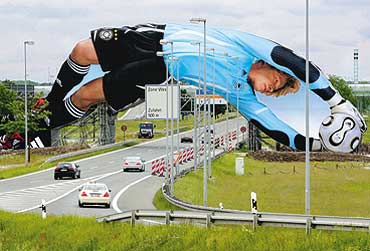 outlookindia.com
-0001-11-30T00:00:00+0553
Till as recently as 1998, India's only commercial link to the FIFA World Cup was restricted to making the footballs to be kicked around in tournaments—hand-stitched in Ludhiana and Jalandhar's grimy sweatshops, sometimes allegedly by children below the age of 14. Eight years on, things have changed for makers of footballs as well as the marketers of the global showpiece in the country.

As India and its burgeoning youth population seek greater integration with the outside world, it was just a matter of time before the only truly global sport captured the imagination of consumers here. The first signs of change were evident in 2002 when the event travelled to Asia for the first time. It was an ideal opportunity for aggressive Korean chaebols like Hyundai, Samsung and LG—all relative new entrants to the Indian market—to hardsell their Korean heritage.

Cut to 2006. The World Cup is a business opportunity worth Rs 50 crore. Television advertising revenues alone during the live telecast of the tournament are likely to top Rs 35 crore. ESPN-Star Sports, which has the TV rights for the World Cup in India, says it has managed to sell almost all the advertising spots during the live telecast, roping in big spenders like Coca-Cola, Bharti, Maruti and Indian Oil. "Generally, the ad rates for any sport can't be compared to cricket in India. But this time around, the rates are on par with those for Test matches involving India. Also, we have taken on board only those advertisers who were willing to be a part of all 64 matches," explains ESPN-Star India managing director R.C. Venkateish. According to ad industry sources, the channel has been hawking 10-second spots for Rs 80,000 to Rs 1 lakh. With nearly 12 minutes of advertising possible during each match, the company could be looking at revenues in excess of Rs 35 crore. 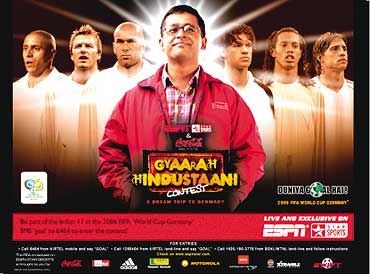 In 2002 when Ten Sports, a private sports channel, broke Doordarshan's monopoly of World Cup football, the viewership in the country started to break new ground. The tournament was watched by close to 30 million people in India and it ratcheted up TRP ratings of 9.1 which at that time was comparable to popular TV soaps and cricket one-dayers. The much smaller Euro 2004, which took place in Portugal, was itself watched by 33 million Indians. Thanks to ESPN seeding the market with quality football content in the form of the English Premier League and UEFA Champions League, and the superior analysis and packaging to go along with it, live international football has certainly made a big impact, at least in the urban markets.

"For about a month, everything else, including cricket, takes a backseat in India. With its scale and hype around, the World Cup is nothing short of a mass event and therefore it makes perfect sense for us to advertise now," says Motorola India marketing director Lloyd Mathias. And since the matches kick off late in the evening, India time, advertisers are confident of getting more eyeballs during prime time.

Companies with a long-standing association with the World Cup, such as Adidas, Coca-Cola and Philips, are running several expensive promotional campaigns to whip up the football frenzy. Ergo, there are street football competitions and five-a-side tournaments organised by firms like Nokia, Adidas and Nike with prizes ranging from a trip to the World Cup to visits to Manchester United's home ground, and even a personal audience with star players like Wayne Rooney and David Beckham.

Not to be left behind, the hospitality sector is trying to cash in on the male bonding during such sporting events by organising big-screen telecasts and attractive offers on food and drinks. Currently, India may be a relatively small soccer market with a national team that languishes at the bottom of the FIFA rankings, but multinationals certainly think it's a market worth investing in. 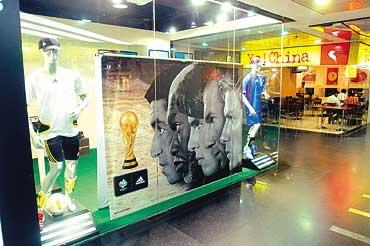 Recently, the world's largest sportswear firm Nike signed a deal to become the official kit sponsor for the Indian football team (it already has the cricket team in its bag). Its regional director Sanjay Mehra says the company is here for the long haul, and wanted to be the early mover as far as football goes. "Our football heritage is unmatched. We are associated with teams like Brazil, Portugal and Holland, and we certainly want to bring that heritage to India which is one of the most important markets for us," he says.

ESPN expects the total viewership to be in excess of 150 million, a five-fold increase since 2002. "We are confident of shattering a lot of TRP records. If with a bit of luck the teams playing the finals on July 9 in Berlin happen to be Brazil and England or Germany, the TRPs would be bigger than even the India-Pakistan odi matches," says Venkateish. Advertisers certainly would watch out for that.