Who Bought The Earth? 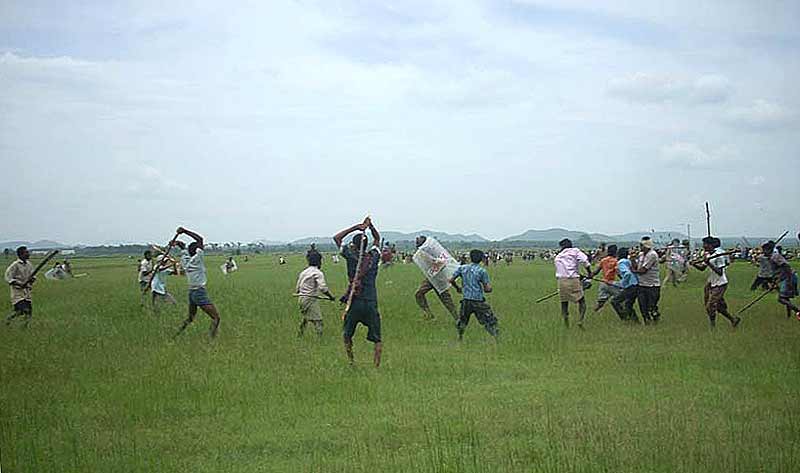 Even though the spectacular growth rates of the Indian economy have slowed recently owing to the global slump, a new impediment has appeared on the horizon that had never been anticipated earlier. This concerns the availability of land for industrial and infrastructural development. The problem is not one of a lack of physical resources. The problem is political.

Land had been acquired “for a public purpose” in India since the 19th century by virtue of the British legal doctrine of eminent domain. Colonial laws allowed the government to acquire privately owned lands for the building of roads, bridges, canals, army cantonments, offices and residences for government staff, and similar public constructions. Initially, the compensation paid was nominal, but through the 20th century, the concept of compensation at market rates was introduced into the law. Yet the land market in many regions remained poorly developed and it was impossible to accurately establish what the prevailing market rate was in a particular area. Nevertheless, the framework of colonial laws of land acquisition was carried over into the period of large-scale industrialisation and infrastructure-building in the decades after Independence. Major industrial townships were established, roads and railways expanded, and dams and bridges built in the ’50s and ’60s after the government took over large tracts of land, providing little by way of rehabilitation and only a pittance as compensation to those who were ousted. There was hardly a murmur of protest.

The first major confrontation occurred in the late ’80s with the agitation over the Sardar Sarovar dam on the river Narmada in Gujarat. This was a major project of irrigation and electricity generation involving 30 major and several hundred minor dams. The Narmada Bachao Andolan led by Medha Patkar highlighted the environmental and rehabilitation hazards of the project and, after a series of high-profile fasts and agitations, succeeded in getting the World Bank to withdraw its support to the project. But there was a counter-mobilisation by political parties, especially in Gujarat, which emphasised the potential benefits the project would bring to millions of farmers. In the end, the Supreme Court intervened to fix the height of the principal reservoir as well as the rehabilitation measures for those displaced.

From the ’90s, new private investments in industry, housing and infrastructure picked up speed. Until now, the laws of land acquisition had not been applied to help private industry. But with the dismantling of the so-called ‘licence raj’ under which the size and location of every private industrial venture had to be approved by government ministries following guidelines laid down by the central Planning Commission, capitalists were now free to set up industries wherever they chose. This created a new environment in which the various state governments began to compete with one another to offer incentives to investors to set up businesses and factories in their state. Besides tax incentives, a major carrot that states could offer was the handing over to private companies of land acquired by government. 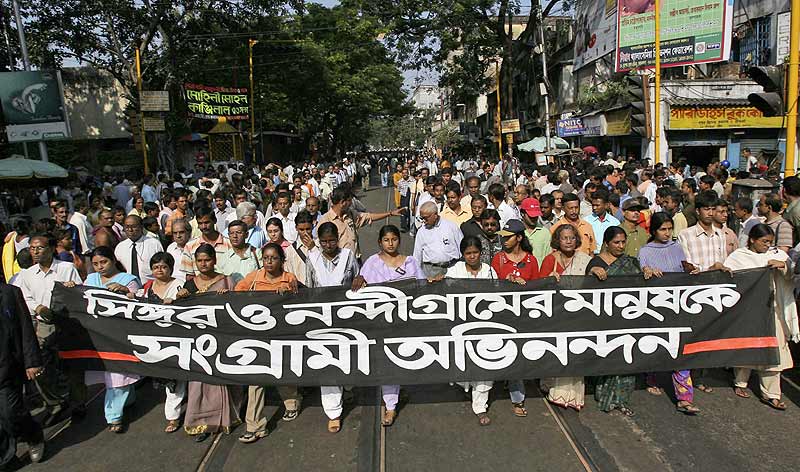 Protest in Calcutta against Nandigram violence

There was always some room for doubt on whether the land acquisition law should have been used by government to secure land for private businesses. But given the heady atmosphere of breakneck growth rates, no one seriously objected. The courts took the view that it was for the government to determine what constituted a public purpose. Governments claimed that anything that promoted new investment, jobs and incomes was serving a public purpose. Investors too developed a stake in the method. It was not always easy to buy from the market a large contiguous chunk of, say, a thousand acres to set up a factory, and even harder to get larger tracts for housing projects. There could be several hundred landowners to deal with, and the inevitable problem of a few holding out for a higher payoff. And, of course, there was the problem of local politics—having to satisfy rival groups and factions that could use their local power to mobilise people to stall the project. It was much simpler if the government were to deal with all this by using its legal powers to acquire the land and hand it over to the investor for a negotiated price. By the early years of the new millennium, this virtually became standard practice for large private investment in India.

It did not take long for the resistance to show its face. Rumbles of protest began to be heard from different parts of the country that landowners were not being fairly compensated. It was not necessarily a matter of villagers being ousted from their traditional habitat. Rather, farmers seemed to be estimating what their land would be worth if a large industry came up in the neighbourhood and matching it against what they were being offered. Something had changed in the perception of rural people since the ’60s. Undoubtedly, part of it was the much greater familiarity of most farmers today with the movement of land prices. They had seen before their eyes that when a highway or industrial complex comes up, land prices in the surrounding areas shoot up several times within a year or two. Those who had given up their lands at the old rates feel cheated. True, new opportunities also open up with the coming of industry. But there is a catch here too. Modern industry creates little direct employment and most such jobs require specialised training. There are indirect spinoffs, of course, in subsidiary industries and services, but not everyone can avail of these opportunities. While younger members of peasant families are invariably keen to find a life outside traditional farming, the older generation is not equally enthused, since it does not have the skills or acumen to take up a new occupation. Consequently, and somewhat paradoxically, even as traditional farming becomes less rewarding and other occupations open up in rural areas, farmers become more rather than less reluctant to give up the little pieces of land they own, knowing that land prices will keep rising and that this was their insurance against future distress.

Even as traditional farming becomes less rewarding, farmers are reluctant to give up their holdings, knowing that land prices will keep increasing.

The watershed events took place in West Bengal in 2006-07. The Left Front that had ruled there from 1977 with a pronounced anti-capitalist image had at this time decided to change course and invite private industry to invest in the state. Tata Motors was offered a thousand acres of land to build a car factory in a fertile and prosperous agricultural area called Singur, not far from Calcutta. Land was acquired against a compensation pitched a little above the current market prices. But as is often the case in a small-farmer economy with fragmented holdings, those who held title were frequently not the actual cultivators while those who actually farmed, including sharecroppers, often did not have valid titles. The strictly bureaucratic procedure of land acquisition which only compensated titleholders could not satisfy those who would lose the most. While the opposition parties began to voice the resentment of these people, the ruling alliance leader (CPI-M) used its organisational muscle to get about 80 per cent of landowners to accept compensation. But a minority, now organised by the Trinamool Congress, held out, refusing compensation and regularly demonstrating outside the newly constructed walls of the Tata factory at Singur.

In early 2007, the focus shifted to an area called Nandigram, some 50 miles southwest of Calcutta. There were rumours that the government would acquire several villages there to set up a major hub of chemical industries. Politically, the area was firmly under the control of the ruling Left Front. But such was the fear spread by stories of land acquisition that virtually overnight people deserted the Left Front to take up cudgels against their erstwhile leaders. Those refusing to denounce the Communists were driven out of their villages and, in tactics resembling the classic patterns of peasant insurgency, police stations and government offices were attacked and officials evicted. Within days, there was no presence of government in these villages. In March, a combined force of armed police and Communist cadres tried to enter the area by force. The clash resulted in the death of 14 villagers, including women, and hundreds were wounded. A police video of the action made its way to the news media and, within hours, the whole country watched in shock and disbelief the violence that could be unleashed in the name of industrial development. Mamata Banerjee, the Trinamool leader, intensified her campaign against the Tata factory at Singur, ultimately forcing the company to shut down its project. In May 2011, the Trinamool Congress was swept into power in West Bengal largely on the strength of its uncompromising stand on the land issue. Following Singur and Nandigram, acquiring land for industrial or infrastructural projects became a sensitive matter everywhere in India. This was compounded by the militant resistance in tribal areas, often led by armed Maoist groups, to new mining operations. Economists and policy experts argued that unless landowners were given a greater share of the expected increase in the future values of their land, they would not willingly part with it. Lawmakers were pressed into drafting a new law of land acquisition to replace the old one. A parliamentary committee, swayed by the prevailing political wind, concluded that government should not involve itself at all in securing land for private companies. But industrial lobbies protested. Besides, there were spectres of land mafias emerging to coerce small farmers into selling their lands to private parties. In the end, a ministerial group has now finalised a bill that proposes that if at least two-thirds of landowners agree to sell their land voluntarily, the government could then use its legal powers to acquire the rest. In tribal areas, however, the elected local body has to first agree before the government could acquire land. The bill is yet to be passed by Parliament.

That is where matters stand today. It is not clear that a new law will necessarily resolve the fundamental problem. On the one hand, an unregulated land market in a boom economy tends to work against small farmers, tribal people and other vulnerable groups. On the other hand, regulation creates room for political patronage, corruption and violence against the opposition. The background to all this is the increased democratic awareness among rural people of their claims to the benefits of development. Industrialisation in India will have to make its way through these contrary pressures.

Partha Chatterjee teaches at Columbia University and was director, Centre for Studies in Social Sciences, Calcutta

The Law Laid Down