A fractious Africa holds the keys to India's UNSC entry. The picture is bleak. Updates 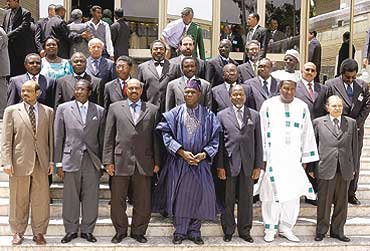 outlookindia.com
-0001-11-30T00:00:00+0553
India's ambition for a permanent seat in the United Nations Security Council (UNSC), as well as that of three other members of the Group of Four, G-4 (Japan, Germany and Brazil), will be decided, of all places, at the African Union summit in Sirte, Libya, July 3-4. It is here the Africans are expected to come up with the names of two candidates for the UNSC. You might ask: what is the connection between Sirte and the aspirations of G-4 countries?

The provenance of this connection can be traced to the G-4 draft resolution which, apart from the candidature of G-4 members, provides for two African seats in the UNSC in the category of permanent seats. The G-4 also seeks an increase of four seats in the non-permanent category over the present 10, on the basis of one each from Africa, Asia, Latin America/Caribbean, and East Europe. This provision of two permanent seats for Africa in the UNSC threatens to drive a wedge between continents, consequently stymieing the chances of India and other three countries in the Group of Four.

The African nations have taken umbrage to the G-4 draft resolution which, in circulation since mid-May, says the United Nations General Assembly (UNGA) will decide upon the African candidates for the UNSC. The Africans say the choice of candidates is a matter for Africa to decide—and not others. They are also unhappy that the

G-4 did not consult them before circulating the draft and contend that the move to table it in the General Assembly also comes too early in the process.

This isn't the view India takes, nor do other G-4 countries. The G-4 wants the draft, with necessary amendments, to be tabled in the UNGA and voted upon in June, thereby setting the stage for the UNSC to pass the resolution and send it for ratification. The idea is to have the new permanent members at the time the UN convenes for the millennium summit this September. Diplomats say the move to table the resolution isn't early, that the expansion of the UNSC has been on the agenda for the last decade—India declared itself a candidate in 1994. As a senior Indian government source put it, "We haven't been able to come to any kind of closure on the expansion of the UNSC. There is a small window of opportunity that is now open. We feel we are near the numbers that give us sufficient courage to move forward."

But the Africans have now put a spanner in the works. Their insistence on Africans choosing the two African countries for the UNSC permanent seat means the vote might have to wait till Sirte. "We have told the Africans that you can vote for the resolution even before the Africans select their candidates and that there is no contradiction," says a senior source. Additionally, New Delhi has been making the point to African countries that there is no alternative to the G-4 resolution in play, and that it caters to the needs of Africa by giving the continent two permanent and one non-permanent seats.

There's, however, another catch: Africa seems deeply divided over who the two African candidates should be. As the Sirte summit veers into view, the old rivalries and new aspirations have combined to present a confusing situation there. This potentially divisive situation is precisely the reason why the G-4 has so far not sought to widen its platform by including potential African candidates in the grouping's effort to force its way into the UNSC.

At the last count there were six possible UNSC candidates from Africa: South Africa, Nigeria, Egypt, Libya, Kenya, and Senegal. There's much distrust in the continent. For instance, South Africa has greater acceptance in the West than in Africa; Nigeria has African support but doesn't have the confidence of non-African countries who feel to include it in the UNSC is akin to lowering the bar; again, Egypt is perceived to be enmeshed more in the Arab world than Africa. Senegal's announcement that it is in the fray, diplomats say, is "the result of the Coffee Club's attempt to split the Africans", and only aggravates the intra-Africa contradictions.

The Coffee Club is a group of countries (including Pakistan, Italy, Spain, Mexico, Argentina, South Korea) bitterly opposed to increasing the number of permanent members in the UNSC. Their opposition stems from regional rivalries. For instance, Pakistan does not want India to get a permanent seat; Italy and Spain don't want Germany in; Mexico and Argentina are against Brazil; South Korea can't countenance the idea of Japan in the UNSC. More worryingly, China has launched a vicious diplomatic attack on the efforts of the G-4, and has adopted a maximalist position saying that an expansion in the UNSC could happen only if a consensus existed for such a move. The Chinese broadside, though ostensibly targeted at Japan, could make the developing countries uncomfortable and open the possibility of losing some co-sponsors to the G-4 resolution.

When the voting comes each co-sponsor can be counted as a vote for the motion; diplomats say that there are now about 25 co-sponsors, including a permanent member, France. Last week, G-4's attempt received an additional blow when the UK, a public supporter of India's candidature, privately let it be known that it could not co-sponsor the resolution. For the resolution to pass muster, it must get two-thirds of the vote (128 out of 191 nations in the UNGA); but for the resolution to fail all the Coffee Club has to do is to rally 64 countries against the motion.

Although the number-game is a closely guarded secret, till last week 21 countries were counted as supporting India's candidature publicly; those who have expressed bilateral support privately number 49; those who have expressed support at the UN number 27; there are seven countries who oppose expansion, and one country (Pakistan) is explicitly against India. This means as many as 85 countries, including Bangladesh, have not clarified to India their position on the issue.

These 85 countries will make or break India's bid for the UNSC. This is where Africa comes in, commanding 53 votes. "Africa is crucial to India's bid," say senior diplomats. Although a handful of African countries have agreed to co-sponsor the resolution, the continent's diplomats in Delhi are disappointed with India's track record on delivery of promises. For example, a Team 9 (a group of eight energy-rich African states and India) meeting in March 2004 pledged $500 million worth of lines of credit; more than a year later Africans complain that not a single line of credit is in place. There has been tardy implementation of the NEPAD (New Partnership for Africa's Development) commitment of $200 million made in July 2003. Five months after tractors and similar material were promised to a few African nations, including Congo, there is yet no sign of delivery. All this could compound India's woes, despite concerted efforts by MEA (see graphic).

Diplomats, however, are putting up a brave face, saying all 53 African votes could be in the bag at the time of voting. For the moment, the problem is to reach the stage of voting and choosing permanent members. This can happen following the adoption of the G-4 draft. At the moment there are more African countries against the resolution than against India per se. But this is small comfort. There are problems a plenty. For instance, if Sirte doesn't come up with any names that has at least a modicum of Arab support (like Egypt), it is likely, for instance that Maghreb and Arab nations, could vote against the resolution. India could then bid goodbye to its ambitions.