Koel Purie has a nice blithe presence. Unfortunately, White Noise does not prove to be an adequate stage for her. In the one-and-a-half-hour-long viewing you start asking for a break, for her sake, and your own as well. 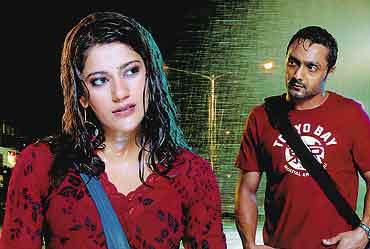 Koel Purie has a nice blithe presence. Very unusual, post-modern, in-your-face and full of attitude—something which can be made to work very well on the silver screen, in the niche film circuit for sure. Unfortunately, White Noise does not prove to be an adequate stage for her. In many ways, the film uses her too much, wrenching emotions out of her in every frame, making her move from one intense moment to another. So much so that in the one-and-a-half-hour-long viewing you start asking for a break, for her sake, and your own as well.

Gauri (Koel) is a TV serial writer trying to start afresh after a broken relationship with a married TV producer. The film then is a journey into finding a personal nirvana and banks heavily on the play of emotions. But its implicit intensity never strikes a chord with the audience. Far from feeling Gauri's sadness and depression, you are weighed down by it and want to flee. Perhaps, the film would have rung a bell had it been an angsty blog or a sentimental diary. As a piece of cinema, the visual communication of feelings is too self-indulgent and laboured to reach out to anyone. Its heavy philosophising on life and relationships is too pat. In fact, the conversations don't seem like genuine talk, more throwing lines at each other. Take the first scene where you have the wife Alka (Anahita Uberoi) telling other woman Gauri: "Next time you try and destroy a home, remember it takes a real woman to break a family...not a slut like you." Ouch!

Simple plots can work with well-observed characters and genuine emotions. Here the large support cast becomes a mere assembly of caricatures. The entire set of TV professionals is badly straitjacketed and the TV-obsessed Punjabi neighbours are too loud and crude. In fact, the whole universe save her colleague Karan (Rahul) seems to be conspiring against Gauri. Can things be so bad? Rahul here makes for another wasted talent. Throughout the film he is just made to prepare coffee for Koel or look blankly at her...how deadpan can you be in love? And it's too boring that their on-screen courtship progresses on pretentious discussions on Jim Morrison. And finding happiness and peace on the banks of the Ganges in Rishikesh? Doesn't work.