Jacob offers an unflinching account of the final days of Saddam's rule and the swift plunge into anarchy. 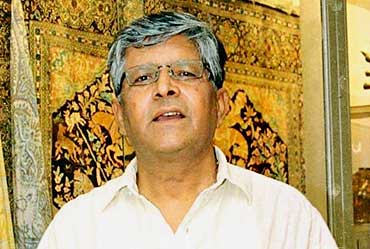 From Hotel Palestine, Baghdad—Pages From A War Diary
By Satish Jacob
Roli Books Rs 295; Pages: 240
Before Operation Iraqi Freedom (not Operation Iraqi Liberation, for that would have naturally been abbreviated to oil), George Bush would frequently allude to Saddam Hussein’s alleged "weapons of mass destruction" to justify the invasion of Iraq. When history judges him, he might well be remembered for making war over weapons that existed only in chickenhawk fantasy. Not even a single lousy petridish containing precursors of chemical or biological weapons.

What was the war all about then? In Iraq’s case, this constant wmd reiteration is a weasel word actually expanding to Weapons of Mass Deception. Through the fog of Iraq ‘war’, it was easy enough to discern that the military proceedings amounted to little more than a turkey shoot: you point at the turkey and shoot and the turkey dies. But reporting turkey shoots of this nature is a daunting task. There were roughly three kinds of reporting on Iraq: lyrical embedded reporting; the kind of reporting Al Jazeera did and got rewarded with US bombing; and the reporting that came out of Baghdad where around 250 reporters spent the duration of the war, holed up in their hotel, herded to press briefings, reined in by designated minders, watched by local spies, lost without translators, manipulated by both sides as they tried to get a fair fix on their stories. As Jacob says, "At least 52 journalists, including the entire team of cnn, were thrown out for dodging their minders."

It is fortuitous that Jacob did not get thrown out—as he nearly was on Day 15—and even more so that he lived to tell the tale. As his diary recounts, he escaped—three times in two consecutive days—being collaterally damaged (another weasel phrase for being unintentionally in the way of a falling US bomb often weighing 2,000 pounds). For the curious, according to www. iraqbodycount.net at least 20,000 Iraqis have been collaterally partially damaged and more than 7,500 collaterally irreparably damaged.

Were a reporter to maintain a diary of the daily proceedings and flesh it out into a narrative, there’s the danger it might turn into a laundry list of the day’s events listed in order of occurrence. This is a trap Jacob avoids admirably. With a touch of understatement, he says in his author’s note that "when I rewrote my diary notes, they turned into a dramatic account of the lead-up to a war that I witnessed first hand". Jacob’s jottings record the events of 45 days from March 5, 2003, to April 16, 2003, from the time he steps out of the plane in Amman to get into Iraq and back. His near constant companions are Nuh Nizami, his cameraman who’s relieved of his camera midway, and Safa, their minder. Woven into the surreal texture of Saddam’s Iraq where boys play football and local markets sell exotic birds as occupiers advance is a bit of everything you needed to know about Iraq.

Jacob offers an unflinching account of the final days of Saddam’s rule and the swift plunge into anarchy. The unremitting scenes of loot and mayhem remind him of New Delhi in the aftermath of Mrs Gandhi’s assassination. Jacob says he has written the book "essentially for Indian readers, giving them the perspective of someone who did not have any personal stake in the story". This book is a timely reminder that the Indian connection may have emerged stronger if our troops had been committed in Mosul for constabulary duties. It’s well worth wondering how they’d have handled (or be allowed to handle) the Uday and Qusay hole-up. But one thing is sure, had Jacob been there, we’d have got a fair story.