Whistling For A Ref

At a time when most parties are in election mode, the government plays around with the CEC appointment 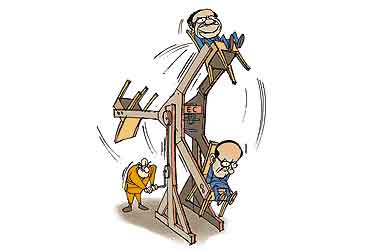 outlookindia.com
-0001-11-30T00:00:00+0553
Who will be our next Chief Election Commissioner? Precedent—and seniority—demand that it be T.S. Krishnamurthy. But if the BJP-led NDA has its way, former cabinet secretary T.R. Prasad could be foisted as the head of the three-member poll panel. At the end of a week of suspense, with political parties already in election mode, the government has put off the decision, triggering confusion and leaving Nirvachan Sadan—the office of the EC—in a state of limbo.

The expected elevation of Krishnamurthy to CEC—by virtue of being the seniormost Election Commissioner—following present incumbent J.M. Lyngdoh's retirement on February 7 was taken as a given. This, because ever since the EC became a multi-member body in the mid-'90s, the government has been promoting the seniormost member as the CEC. It began when M.S. Gill took over from T.N. Seshan in 1996 and when Lyngdoh succeeded him in 2001.

But when a coterie within the NDA sought to give 'tradition' a go-by and project an alternative in the form of Prasad, currently a member of the 12th Finance Commission, it raised an alarm. The government's apparent reasoning: since the post of the CEC was a constitutional one, coming under the administrative jurisdiction of the prime minister, he should be given a free hand to select an 'appropriate' candidate. Not only that, Prasad's candidature reportedly had the backing of deputy PM L.K. Advani and finance minister Jaswant Singh. Bolstering their case, law ministry officials have argued that the elevation of the seniormost EC for the top job had no "statutory value".

Sources close to Krishnamurthy told Outlook that he'd rather quit than see the precedent of seniority being bypassed in his case. In fact, there is talk of the other election commissioner, B.B. Tandon, following suit, in solidarity with his colleague. Understandably so, say EC officials. "If the government chooses to bypass well-established traditions in order to get somebody of their choice, it will undermine the independence and control of the EC," says an official. Asked about the government's move to bring an outsider as CEC, Krishnamurthy told Outlook: "I will not say anything about this now. I'll share my thoughts after February 7."

That the government's still in two minds is borne out by the fact that neither Lyngdoh nor Krishnamurthy have been apprised of who would take over after the former's retirement. "When Lyngdoh was elevated as CEC on June 13, 2001, in recognition of the principle of seniority, his appointment was notified by the then government well in advance on May 18," says former CEC M.S. Gill. Gill had in fact 'selected' Lyngdoh when the second EC G.V.G. Krishnamurthy retired in 1998 and communicated it to then PM Deve Gowda.

"The EC is currently headless, and with the biggest Kumbh Mela (elections),happening in a few months' time, the seniormost member must take over. Krishnamurthy's appointment will be a credit to the EC. You can't play party politics with this institution which is one of the few to have lived up to its reputation," Gill told Outlook. Former CEC T.N. Seshan refused comment on the issue.

The other names being considered by the government for the slot of the third EC, in the event Krishnamurthy is made CEC are former commerce secretary Deepak Chatterjee and former CBI director P.C. Sharma.

By taking its own time in announcing his name, the government's strategy is to wear Krishnamurthy down. But those close to him vouchsafe for his "fierce" independence."Even when he was additional secretary (revenue), he complained to then FM P. Chidambaram of not being able to 'adjust' with the revenue secretary's style of functioning. He wanted a transfer or wished to go on a long sabbatical," says a senior bureaucrat.As secretary, company affairs, Krishnamurthy brought about changes that caused some chagrin to some colleagues. Those who've watched him closely at the EC maintain he's a "strong individual", perhaps even "stronger" than Lyngdoh.