The cream of cricketature—inspired prose on the world's finest game 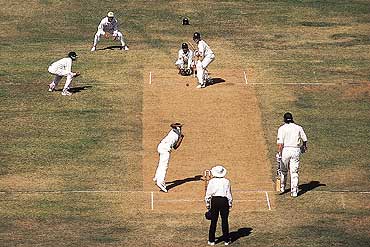 The Picador Book of Cricket
By Ramachandra Guha
Picador India Rs395,Pages:476
IT is surely a scandal that in 110 years of cinema, only one feature film has ever been made on cricket: The Final Test, starring Jack Warner and Robert Morley (with Compton, Bedser and Laker playing themselves). But what cricket has lost at 24 frames a second is more than made up in the written word. No other game has produced so much high literature, often masquerading as mere reportage. But then, it was perhaps inevitable that the finest sport invented by man would inspire the finest writing that any game has ever produced, or can hope to.

Cricket anthologies have a long pedigree, but where the Picador collection differs from its predecessors is in its conscious internationalism: B.C. Pires rubs shoulders with Martin Johnson, N.S. Ramaswami’s essay follows Alan Gibson’s. Two of the most touching essays in the book are Dale Slater’s profile of a talented black South African all-rounder destined by apartheid to never play a first-class match, and Philip Snow’s reminiscences of a Fijian who could have given Ian Botham a run for his money.

The greats, of course, are here, with their divine arsenal of strokes. The toughest task for any cricket anthologist is surely to overcome the impulse to carry everything written by Neville Cardus on the game (Who but Cardus and which game but cricket could have produced a sentence like this: “As England’s total arrived at the full tide of 400, Duleepsinhji allowed his freedom of strokeplay to run to licentiousness”), and the whole of C.L.R. James’ Beyond a Boundary. Cardus is represented here through seven pieces, from his classic profile of Arthur Mailey to a jolly little essay on umpires. Guha has selected four from James, including his famous celebrations of Headley and Sobers (“His command of the rising ball in the drive, his close fielding and his hurling himself into his fast bowling are a living embodiment of centuries of a tortured history”). Fingleton appears six times, and it’s a pleasure to read again that definitive paean to Victor Trumper and the craftily calibrated appraisal of Bradman, Brightly Fades the Don.

There’s E.W. Swanton on Compton’s arrival on the county circuit (“At this point there entered a juvenile figure with an oddly relaxed way of walking, somewhat loose round the knees and with a swaying of the shoulders, inclined to let his bat trail after him rather than use it as a stick in the usual fashion”), Ray Robinson on Keith Miller’s derringdo, and Matthew Engel’s poignant piece on Colin Milburn, whose career was tragically cut short by the loss of an eye. And many more panegyrics to the great and the godlike. But, though the deepest memories in any sport are about glorious individual feats, in my opinion the best cricket writing has always been reserved for—in the absence of a better word—the joy of the game, often expressed through odd tales about the less-than-famous. Here too, the book does not disappoint: among others, there’s a superb piece on legendary Sydney barracker Yabba (when a new batsman had added only five in half an hour with the team total above 500, Yabba shouted at the batting side captain: “Hurry up, declare the innings before he gets set and scores a century!”). But why, oh why, is there only one funny piece from Ian Peebles, the drollest cricket raconteur of all? Why is not there a single article on the art of captaincy, for surely in no other game does the captain play such a decisive role? Why include a V. S. Naipaul review of Beyond a Boundary when you have already carried three chapters from that classic? If this was done to include a literary figure in the book, a better choice could have been Harold Pinter’s graceful takes, devoid of those mysterious pauses that confound his drama critics. And the omission that rankles the most is that in spite of half-a-dozen pieces on Yorkshire cricket and cricketers, there’s nothing on Geoff Boycott, whose idiosyncrasies have inspired some of the most entertaining cricket writing ever.

Indeed, the only complaint one has about this anthology is that it could have done with a lighter heart. Guha’s introductions to the articles are often packed with nearly exhibitionist levels of trivia, and the relentless ‘I’-s sometimes give these entrees an egotistic tone. Both cricket fanatic and bookworm, he has put his heart and soul into the project, but they need not have been flaunted. But these are minor carpings that fade to nothing compared to the pleasure that some of the pieces dole out unsparingly. Consider the exquisite opening of a newspaper report by Cardus on a well-fought Ashes Test: “There is a passage in Tom Jones where Fielding, having got his plot terribly complicated, calls on all the high Muses, in person and severally, for aid; because he tells us, ‘without their guidance I do not know how to bring my story to a successful conclusion’. As I write this report, I feel also the need of inspired and kindly forces. The day’s play, in the old term, beggars description...” Hallelujah!