Where The Gods Dance

Kuchipudi village is getting an international centre for the dance. Are the gurus pleased? 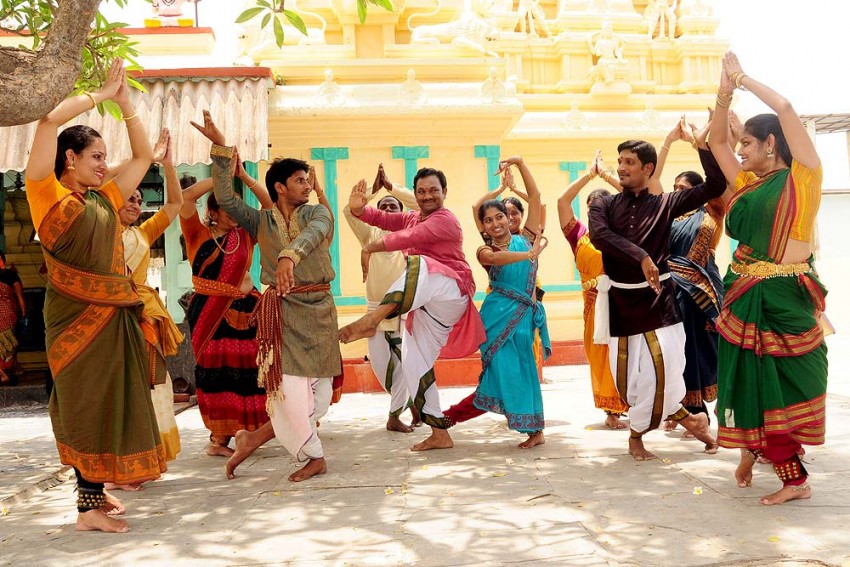 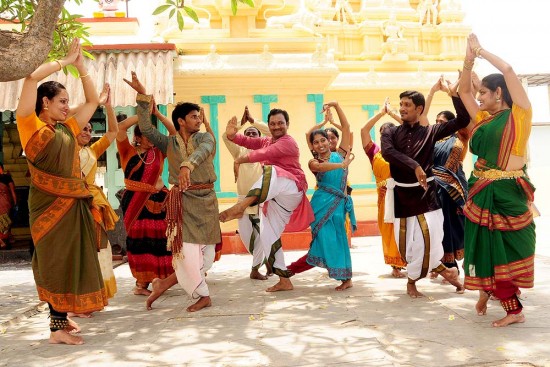 The crescent moon hangs low, flanked by twinkling stars in the night sky of Kuchipudi village. A cycle bell rings along the narrow road, its rider seemingly buoyed by the gentle summer breeze. Out in the verandah of the Siddhendra Yogi Kuchipudi Kalaks­he­tram, a group of young students work up a fleet-footed rhythm to the beats of ‘tai tha kita taka, tah jham ta toom...’. A little later, the academy’s Carnatic music teacher, Venkata Durga Bhavani, winds her way through the verse, ‘Mathura nagarilo challanamma podu, daari vidumu Krishna Krishnaa’, her nose stud sparkling in the moonlight. For a few seconds, the aching melody has everyone transfixed.

Kuchipudi, the birthplace of the classical dance form of the same name, is a tiny village in Krishna district, about 55 km from Vijayawada. The black delta soil makes it a rich three-crops-a-year farmland. The air is crisp, as if steeped in the traditions of dance and music.

It is this village culture which has produced some of the greatest Kuchipudi dancers and teachers the world has seen, which the Andhra Pradesh government wants inculcated among school students across the state. Vedantam Ram­alinga Sastry, principal of the Kalakshetram, has written course material for Classes Vi-VIII to help students grasp the basics of Kuchipudi, its mudras, abhinayas, nri­tya natakas and its roots in the Bhaga­v­a­tam. Considered the heartbeat or Tel­ugutanam (essence of Telugu culture), the dance form is to be the centrepiece of the new state’s cultural push. In fact, a Kuchipudi performance will now be a must at every government programme and a major part of the upcoming Godavari pushakarams (river festival).

Apart from all this, the state is planning an International Institute of Kuchipudi in the village which would have a mus­e­um, a hall of fame, performing arts cen­tre, hostel, a 3D theatre, outdoor stage, restaurants and a hotel. “We will build a world-class cultural heritage village so that people from around the globe can come and stay. The Kuchipudi Kala­ramam, built over 100 acres, will be the nerve centre,” says, the Kuchipudi project chairman, NRI Kuchibotla Anand.

The current Kalakshetram, which stands on four acres of the modest village, has some 150 pupils. Most of them seem delighted with the plans. Unlike the more popular Bharatanatyam, Kuchipudi as  a dance has waned over the years. It is estimated that there are only 15,000 qualified Kuchipudi dancers in India now. “In the mad rush for engineering and medical college entrance tests, students and parents have given the fine arts a miss,” feels Durga Rao from Kakinada, who is pursuing an MA in Kuchipudi nrityam at the Kalakshetram. Hailing from a family of farmers, Durga says his parents are still befuddled by their son’s choice of pursuing a career in dance.

Radhesyam’s supine grace as he teaches ‘Bhama kalapam’ is breathtaking. His pupils pause for a sip of water, but not him....

Today, some 13 Brahmin families in the village are involved in Kuchipudi. Many of the stalwarts such as Vempati Chinna Satyam and Vedantam Satyanarayana Sarma migrated to Chennai early to propagate the art there. Legend has it the Brahmin families would tour villages in bullock carts to perform at the temples. The dance was patronised by kings of the Vijayanagara empire as well as the Gol­conda dynasty. In fact, it was Golconda ruler Abdul Hasan Tanisha who gave the artistes land shares in the village which came to be known as Kuchipudi. “Many disciples of the dance come to Kuchipudi to imbibe its purity,” says Anupama Bhushan, as she wipes her brow after some hectic practice. “Once Kuchipudi is out of here, it kind of loses its flavour. That is why I have come here from Bangalore to do my MA,” she says.

Teachers like the famous Vedantam Rad­hesyam and Pasumarthi Kesav Pra­sad do not even quote a fee. Students, young and old, come from Nellore, Mac­hilipatnam, Vijayawada, Warangal, Gud­i­vada, Chennai and Bangalore to learn from the gurus. “The knowledge of Kuchipudi is not my copyright. It is my duty to spread it around,” says the 60-plus Radhesyam. His supine grace as he teaches the ‘Bhama kalapam’ and ‘Parvathi kalyanam’ is breathtaking. His pupils pause for a sip of water but not Radhesyam, knotting his toes and crossing his feet in his tiny dwelling.

At Kesav Prasad’s, you see him displaying enormous affection and patience with the young children struggling to get their hand-eye movements right. Prasad recollects how the legendary Vedantam Satyanarayana Sarma (1935-2012) had once floored Jawaharlal Nehru with his portrayal of Usha. Nehru insisted on meeting the “charming girl” backstage and was stunned on learning it was a male. “He gushed about Sarma’s performance to one and all,” says Prasad. The veteran teacher then fumes over how today’s popular cinema has completely ruined it for male classical dancers, depicting them as gays. “This is how our pristine culture is lampooned,” he frets.

Such anecdotes are common in the village where men often have to deal with questions about their masculinity. The gurus say there are at least 15 men they know who are touching 30 but aren’t getting marriage proposals due to their Kuchipudi associations, the low incomes and the “effeminate career”. That hasn’t deterred enthusiasts like Y. Narendra Kumar though, a western dance choreographer in Telugu films.

“If this connect between the artiste and the soil is broken, why then will the teachers stay on in Kuchipudi?”

Meanwhile, the proposal to build the Kalaramam on 100 acres of Kuchipudi soil also has people worried. Kesav Pra­sad says the reason many Kuchipudi fam­ilies stay on in the village is because of the land they own. “If this connect between the artiste and soil is broken, why then will the teachers stay on in Kuchipudi?” he asks. Principal Vedantam Ramalinga Sastry is cautiously optimistic. He explains that most farmers here own just 2-3 acres of land, some even less. “Agriculture is important. But if a world-class academy comes to Kuchipudi, it would be a boost for the dance form. Talks can be held to decide if indeed 100 acres are needed or 50 would suffice.”

Kuchibotla Anand says he understands the sensitivity of the land issue. “Yes, I know the soil here is agriculturally fertile. But look at the state of the village—it has 90 per cent dirt roads, no hospital, sanitation is an issue,” he says. Anand lays out ambitious plans for building con­crete roads, a hospital with an OT, a good school and taking the number of Kuchipudi dancers to 30,000 in a few years. This in turn will generate a dem­and for teachers and performers, he believes. “Kala kadupu nimpali (Art must sustain the artistes),” emphasises Anand.

For the moment though, the magic of Kuchipudi lies in the fragrant soil of the village, its bright red sunsets and its down-to-earth inhabitants. Cycling to the village’s famous Ram­alingeswara Swami temple, Vedan­tam Radhesyam slows down to wave at some nervous young children who are starting their first class. “I’ll dance till my last breath. Kuchipudi is where I can breathe free. We welcome anyone who embraces the spirit of our dance,” says the guru.