Where The Black Waters Part

Vapi industrial corridor is a ‘shining’ example of Modi’s Vibrant Gujarat. Tell that to the stinking, cancer-ridden nearby villages. 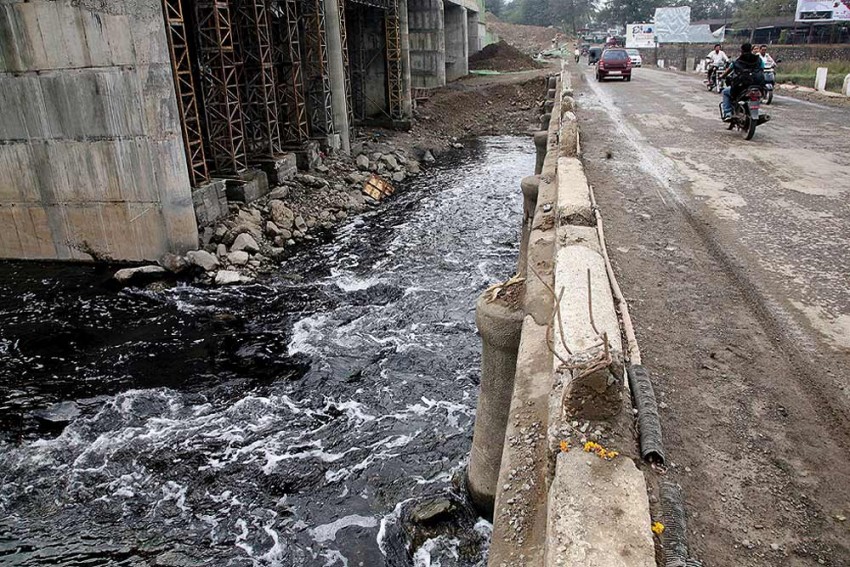 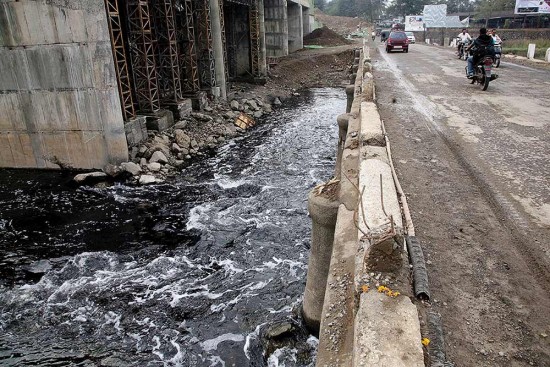 “You’ll be able to smell it,” is the constant refrain when we ask for directions to Vapi, an industrial town sitting on the southern end of the country’s Golden Corridor, a 400-km industrial belt in Gujarat. To reach this city in Valsad district, we travel on National Highway 8 which stretches from Mumbai to Surat. The highway itself is a joy to drive on, see­ming to deliver the promise of Narendra Modi’s ‘Vibrant Gujarat’. But as Vapi app­roaches, more than the highway signboards marking distances, it’s the afore-mentioned smell, a pungent odour, that lets us know we are nearing our destination.

The approach to the city is marked with chimneys from the 1,048 registered industrial units jutting into the skyline. The town is grey and smoky, engulfed in haze. In the distance, from the vantage point of the elevated corridor, we can spot black smoke emitting from the factories dotting the vast Gujarat Industrial Development Corporation (GIDC) area that half of Vapi inhabits.

As the BJP’s prime ministerial candidate goes about promising development and urba­nisation in his 2014 Vision Statement, Vapi perhaps best represents what Modi’s Gujarat model of development stands for. It’s the largest industrial township in Asia for small-scale industries, dominated by chemical and fertiliser factories. It has all the trappings of an industrial hub but, just 10 km away, the narrative encounters its biggest pitfall—a degraded environment. In 2013, Vapi was declared “critically polluted” by the Union ministry of environment and forests (MOEF), bringing it back on the list of most polluted places in India. Four months back, alarmed by the pollution levels, the MOEF reimposed a ban on permission for new projects in the city.

The elevated NH-8 cuts through Vapi town, bisecting it into two equal halves—the western part of the original town and the eastern part with its residences and the GIDC industrial estate. Vapi itself presents a bit of a dazzle. The drive-through its­elf boasts huge showrooms of Volkswagen, Chev­rolet, Hyu­n­dai, Honda, Tata Mot­ors and Nis­san, in kee­ping with the aspirational tones of the business hub of Surat that lies ahead on the stretch. Inside, the bylanes are dotted with branded stores, targeted at the stream of foreigners that hoteliers claim continuously visit Vapi for business reasons.

Barely 10 km from the glitz, the scenery takes on a stark contrast. The metalled highway turns into potholed dirt tracks leading into the villages of Kolak, Udwada, Kalsar, Kikala, Saran, Orwad, Rethlao and Baghwara where the waste from the industries gathers thr­o­ugh the local Kolak and Damanganga rivers. Undeveloped and poor, the air in this area has a distinctly foul smell. Villagers complain that over the years disease and death are now everyday ghosts. Sarpanch Kishore Bhai Diti­yatandel says, “Every second house in Kolak has a cancer patient. People just don’t talk about it because of the social stigma attac­hed. Those with skin diseases hide their def­ormities. All these ailments, including TB and asthma, cropped up in the last 10 years.”

Every house in Kolak village has a ‘pollution file’, complete documentation of the long battle the villagers have waged on that front. Eighty-year-old Kantibhai Makrand, a cancer survivor, is bitter about the present and the future: “Traditionally, this is a fishing village. We had 48 boats in the village, supporting a population of 7,000 people exporting Bombay Duck, fish moss and fish fin. When the industries came, they polluted the rivers. Now the fish are all dead and the water is toxic.”

For proof, one just has to walk near the Kolak river bank bordering the village. The water is black and the stink is overpowering. The Vel khadi in Murraih village has sludge and foam floating on top and the Damanganga looks more like a drain. That’s why in 2010, tired of government apathy on the drinking water shortage in the area, Kolak’s villagers got together to collect donations for a private water filter plant. Set up at a cost of Rs 15 lakh, the plant caters to the needs of 50,000 people in the eight villages around Kolak. The heavily chlorinated water supplied by the state-run water works department is used for washing purposes only.

In Udwada, Danik Patel, once a farmer and now a construction labourer, says, “You can’t farm here anymore. Sugarcane and paddy that once grew well are all finished. Water and air pollution have ruined the soil.’’ Dismissing the clamour over pollution, Anil G. Patel, regional officer, GPCB, Vapi, has a  ready defence: “There has been tremendous improvement in the last three years. We have pushed industries to spend Rs 300 crore on upgrading technology for treatment of waste. In the last six months alone, we have served 70 closure notices to various units for not following proper guidelines.’’ Quiz Patel on why the MOEF reimposed the tag of ‘critically polluted’ city on Vapi and he hints at the issue being “politically motivated”.

By Prarthna Gahilote in Vapi