Home  »  Magazine  »  National  » Interviews  » Interview »  "Where Is The Clash Between My Religion And Tenets Of Secularism?"

"Where Is The Clash Between My Religion And Tenets Of Secularism?"

This feisty sanyasin is sitting pretty in MP after the resounding assembly poll victory. She tells K.S. Shaini she is ready for an encore. Excerpts: 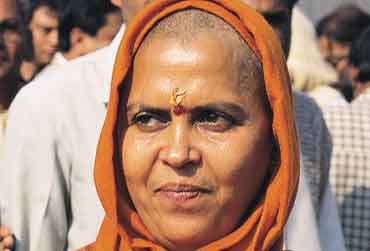 outlookindia.com
-0001-11-30T00:00:00+0553
Power cuts and bad roads of the last regime got you votes. But your first hundred days have changed nothing.
I think there has been a perceptible improvement in the power situation in the state. Look at the way we provided sufficient power to the farmers for irrigating their fields during the recent season. We have stopped morning power cuts keeping in view the ongoing examinations.

A sanyasin as chief minister in secular India?
Where is the clash between my religion and tenets of secularism? Mahatma Gandhi was religious; so was Indira Gandhi. Just because I am a sanyasin, my temple-going becomes more noticeable.

Will you campaign outside MP? Is the mandir an issue?
My pre-occupation with chief ministerial duties does not leave me with much time, but I will try to chip in if the party leadership wants me to. As for the Ram mandir, I have said that it is an article of faith for us and has nothing to do with elections.

Christians have been attacked in Jhabua and Gwalior...
I have always maintained that the rule of law will prevail in such matters. Sometimes I feel minor incidents are blown out of proportion. In Jhabua, the leaders of the Christian community have thanked me for prompt and timely intervention.