Indian cities are a mixed bag—the good is often laced with the bad. Take your pick. 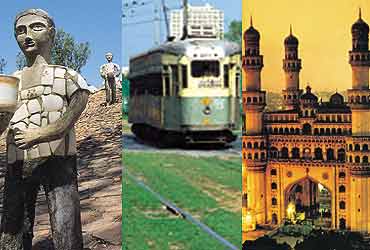 Mumbai is obviously a better place to live in than Delhi. Moreover, it’s a city of hope, dreams and opportunities. But hey, Delhi has better infrastructure and quality of life. Wait a while, Bangalore is even better—cheap, great weather, nice pubs and a global tech centre. And what about Hyderabad with Chandrababu Naidu’s vision to make it a happening city? Such debates rage in every household.

So, Outlook Money hired Delhi-based Indicus Analytics to conduct the first-ever ‘The Best Cities To Live In’ survey. We took 12 parameters, 50 sets of indices, 60 variables, 3,600 direct responses and 9,974 statistical nuggets to put disputes and doubts to rest.

Surprise, surprise. Chandigarh, a Union territory and the capital of Punjab and Haryana, gets the top rank. It scored the highest on three counts: jobs and income, financial infrastructure, and consumption. Chennai and Calcutta follow. In the top 10, six cities are located south of the Vindhyas. Only Chandigarh is in the north; one is in the east (Calcutta at No. 3), one is in the west (Ahmedabad, No. 10), and one in central India (Bhopal, No. 7).

All the six metros figure in the top 10, except for Delhi (No. 13) which was pulled down by its poor scores on safety, education and prices. It’s also because it has the highest SEC A&B population (the top two brackets in socio-economic terms) in the country, which has reduced the per capita averages on all parameters. The worst five cities in a sample of 55—Vellore, Allahabad, Tiruchirapalli, Madurai and Kanpur—performed badly on almost all counts. Interestingly, only two of them came the lowest under any parameter—Vellore, the worst city, got the lowest in prices, consumption and transport and Kanpur, the most crime-prone city.

The survey’s methodology takes into account a wide range of parameters: from job and...