Corporates pitch in with money, reconstruction and adoption of villages 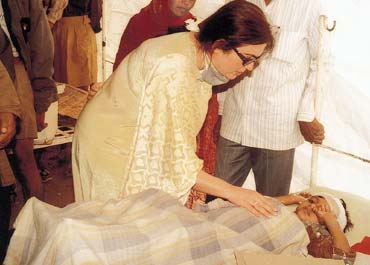 outlookindia.com
-0001-11-30T00:00:00+05:53
WHEN the quake rattled parts of Gujarat, Reliance chairman Dhirubhai Ambani was holidaying at the Kanha tiger sanctuary in Madhya Pradesh. While elder son Mukesh, his wife Nita and several grandchildren of the Ambani clan were with the patriarch, younger son Anil and his wife Tina were in Mumbai. Exactly an hour after the quake, calls started pouring in from all Reliance complexes, especially from the Jamnagar refinery, the Hazira petrochemicals complex and the Naroda complex in Ahmedabad (all in Gujarat) and the Patalganga petrochemical complex in Maharashtra.

The news was simple: there was no damage to the plants or people. The family immediately winged for Mumbai where Dhirubhai summoned a meeting with his two sons and his top aides. The agenda was immediate relief in the damaged areas of Bhuj. Hours later, the first planes to land in Bhuj—even as the airport appeared damaged—were from Reliance, carrying 40 doctors and 20-odd paramedical personnel. Throughout the night, Reliance planes and choppers ferried medicines, medical equipment, food packets and clothes. The next day, Reliance announced it was adopting Anjar, which once housed 80,000 people, and swiftly divided the village into 10 zones, assigning responsibility among 3,500 workers—aided by cranes, bulldozers, satphones and choppers making regular sorties—to make life normal for an estimated 4,00,000 people in the region.

Even as Mukesh and Nita supervised life and death amid rubble and dust in the region, Dhirubhai penned an emotional letter to the PM, informing him of the group's decision to pledge over Rs 20 crore worth of relief material and its decision to adopt some villages. "Reliance is deeply conscious of the social responsibility of business and industry," Ambani wrote in his letter.

Cynics may link Reliance's efforts to the fact that the majority of its business operations are in Gujarat. But the Rs 12,000-crore conglomerate's gesture set the pace for similar efforts. "We've already provided housing to 100 families in Ahmedabad in our flats and will construct homes for another 200 in the Kutch region," Nirma Industries chairman Karsenbhai Patel told Outlook.

The nddb or the National Dairy Development Board has been sending 45,000 litres of milk and milk-based products daily to Gandhidham, Bhuj, Kandla and Anjar. Now, the Anand-based cooperative plans to replace lost livestock. "Though the loss of livestock is fairly low, whatever is lost will be replaced," says a senior nddb official.

mncs too have pitched in. "With the money raised—besides relief—we want to adopt as many villages we can," says Amit Mitra, secretary general, ficci, which—along with care and mncs like PepsiCo—formed the ficci-Gujarat Rehabilitation Project (fgrp) that will build 4,000 houses in the village clusters of Bhachau and Rapar talukas in the Kutch district. "Construction of homes will help end tensions for hundreds of those currently living in tents," remarked Deepak Jolly, vice-president, PepsiCo India, which donated $5,00,000 as an initial contribution towards fgrp and despatched 100 employees for relief operations in the region.

Similar efforts have been made by cii, which has set up a makeshift office in Bhuj to supervise relief. "After the first phase of clearing is over, we'll identify 35 villages in the Bhachau region for adoption," says cii senior director Sunil Parekh.

For many, it's a question of getting the infrastructure back in shape—like the efforts from hcl Comnet which has deployed five vsats in the worst hit areas of Bhuj, Ahmedabad and Rajkot. Expectedly, the move helped local residents contact their relatives and facilitated speedy movement of both machinery and relief.

After all, the long-time solution to the Gujarat crisis lies in reviving infrastructure in the country's second-most industrialised state. And the corporates hope to achieve that through their pragmatic approach.