When You Want It That Much More

All the poor Bihari kids in the Super 30 got into IIT this year. What's the secret? 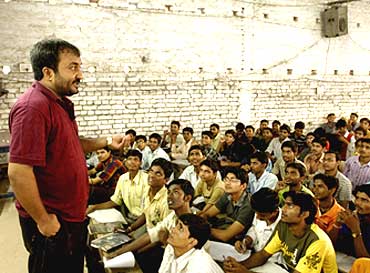 Select the Best
Candidates are screened for IQ levels with three written tests, categorised as 'difficult', 'more difficult' and 'most difficult'.

Make them Slog
For one year, students study day and night; they can't miss a single tutorial class.

Stay Focussed
As far as possible, no television, no Internet, no movies.

"The desperation to rise above their station should not be underestimated. It makes these students strive harder than others," says Anand Kumar.

For some reason, the otherwise soft-spoken 40-something Nirmala Devi insists rather belligerently that the interview and photo shoot of her son take place in a nearby slum and not in the two-room cement shanty where they both live on the outskirts of Patna. Once there, she tells the curious men, women and children who emerge out of their cramped cubicles, "Oh, it's nothing...just that my son is ranked so high in the Joint Entrance Exams that even the media wants to talk to him." It's only later, while wiping away the tears streaming down her cheeks, that Nirmala Devi explains. "These are my in-laws. They made my life miserable after my husband died just five years into our marriage, taunting me relentlessly for wanting to educate my three small children in spite of having no means to do so." 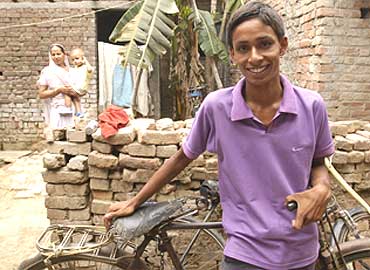 "Overcome every obstacle": Satish Kumar, his mother behind him

That was nearly fifteen years ago, when her youngest son Satish Kumar was only three. She recalls how they would tell the young boy who loved to study that he was wasting his time reading books because he was too poor to ever afford a proper education. His mother's 200-rupees-a-month widow's pension was hardly enough to buy rice for the family, let alone books or the school uniform. "'You need mental strength and physical stamina for the hard work that education entails'," Nirmala remembers her mother-in-law telling her. "'How will he get that from the rice starch and salt you give him to eat?'"

Eventually, this endless mocking chased her out, and Nirmala Devi moved into a separate two-room house in a slum a few blocks away. Today, clearly she has returned, head held high, to answer those critics. That's thanks to Satish, who is now 18 years old, and had resolved, in his own words, "to overcome every obstacle that came my way to rise to the top". When this year's IIT-JEE results were declared in April, his name appeared alongside India's highest scorers, giving him automatic entry into any of the Indian Institutes of Technology, considered the nation's premier temples of higher learning, entry into which is also still regarded as a prerogative of the privileged.

But then so did the names of the 29 other students of the coaching group he was part of: the Bihar-based Ramanujam School of Mathematics' 'Super 30' section, run by Anand Kumar, a mathematics teacher and columnist for various national and international science journals and magazines. This year is special for the original 'Super 30', set up in 2002. This year, each and every student of the coaching class—all, it must be stressed, from below the poverty line needy families—made it to the IITs. Its extraordinary success is not only a topic of much speculation in the academic world—which has not yet been able to crack the secret code or its formula for success—but is also a cause for concern for a number of commercial JEE-coaching institutes in Bihar, which obviously fear being done in by the competition.

A couple of years ago, there were several attempts on the life of Anand Kumar—including bombs being hurled at him on the streets of Bihar as well as an incident in which he was nearly stabbed in the chest by a masked man. These incidents, according to Anand, "were attempts by competitive commercial coaching companies, in connivance with local criminals, to finish me off". Today, he never steps out of his house without three armed bodyguards. A ferocious Labrador stands guard outside the house. And he carries a loaded and licensed pistol to bed whenever he feels threatened. "I don't want to take chances with my life. Many people depend on me and I have unfinished business to take care of." 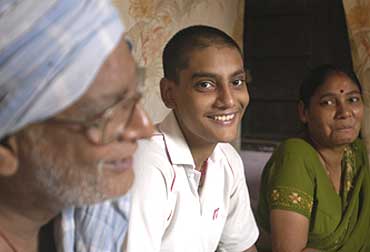 Vishwaraj Anand, 17
"Aerospace is my interest. One day I want ISRO to do better than NASA."

He’s the son of a Grade-IV government employee, who got a job during the electrification drive in their village but subsequently was laid off. Vishwaraj was sent to Patna to live with his grandparents because there was no money to educate him. Ambitious, intelligent and hardworking, he excelled in school—and then applied to the Super 30.

This 'unfinished business', of course, is the task Anand has taken on himself—ensuring that not a single underprivileged boy or girl in Bihar (with exceptional intelligence) is deprived of an opportunity to get ahead because of their lower social and economic condition. Coming from a poor family which depended at one time on door-to-door sales of homemade 'papads' as its only source of income, Anand is aware that to be born with an extraordinary intelligence quotient alone does not guarantee success in life.

He remembers all too clearly that he had to fight hard just to get to use the superior mathematical ability he realised he possessed early on in life. "The Super 30 was born with this idea in mind," explains Anand, who had started the Ramanujam School of Mathematics in the mid-90s. At that time, he worked with Patna Additional Director General of Police Abhyanand, who later started a breakaway Super 30, which is also very successful (this year 48 of the latter's 54 students made the IIT grade). However, Anand declined to comment on their parting of ways.

The 'institute' itself is located on the fringes of Patna, beyond the bumpy Bihar roads, past stretches of a treeless landscape with pavement huts and congested slums. A rusty gate opens up to reveal a dusty area that looks more like a cow shed with a roof of corrugated metal sheets than like a classroom. This, as the sign over the fenced gate points out, is the Ramanujam School of Mathematics. The students, who come here to attend classes from Patna and also from faraway villages, make the journey every day by bus, on bicycles or even on foot. Those who stay in the hostels are provided free food and lodging.

The rows of long, narrow wooden benches with attached desks are largely empty now. This time, early June, is the transitional period between the end of the last batch of Super 30 and the beginning of the next. But though classes have ended and the wait now is only to know which IIT they'll be placed in, several of the outgoing batch have turned up to pick up pointers from "Sir".

"We want to take as much as possible from him before we leave," admits Nagendra honestly. The 18-year-old 'Super 30' boy is the son of a sweeper, and he remembers his childhood as being plagued by poverty. "There was never enough to eat for my parents, my three siblings and me. I want to rid my family first of poverty, then my state and eventually the country," he says. Nagendra had to fight great odds just to get admission in the free government school in his village. "I borrowed other people's books to study but except for a couple of times, I always came first in the class." 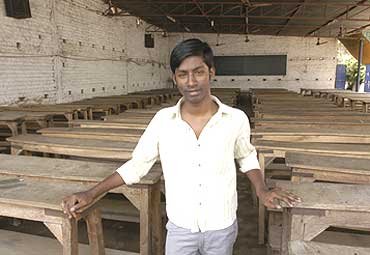 Nagendra, 18
"Nothing is impossible."

The son of a sweeper, Nagendra studied in the free government village school and was always ‘first’ in class. He hated the sight of seeing his father cleaning sewers and vowed he wouldn’t do that. Borrowed Rs 60 to buy the Super 30 application form.

Though the students of Super 30 put some credit for their amazing success to their "hard work", they are all in awe of the "unique teaching techniques" of "Anand Sir". Satish Kumar talks about the "interesting tales" Anand tells in class to illustrate complex mathematical and scientific theories, making them easy to grasp. "He held us spellbound with a thrilling story of a daring robbery only to demonstrate to us that differential calculus was similar to the way the detective went about gathering clues. "

Super 30 students as well as teachers claim that the practice of administering sample tests every single day for one year is also a foolproof way of preparing students for the competitive exams, ensuring that they have pretty much worked with and figured out every conceivable permutation and combination. Praveen Kumar, one of the two teachers other than Anand Kumar at the school, puts things in perspective: "If you've solved every imaginable problem in the book at least once, there is nothing that's going to stop you from cracking the IIT code. Because of the sheer power of practice, the competitive questions never come as a bolt out of the blue for our students." 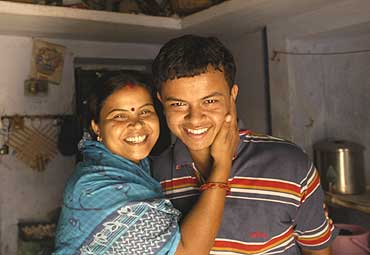 Rahul, 17
"I never imagined that, with my financial background, I could make it to IIT."

Ever since Rahul’s father—who worked in a local press that shut down a decade ago—lost his job, there’s been no steady income for the family. Enrolled in a free government school, Rahul had his eyes peeled for better opportunities. Then came Super 30.

Anand himself believes it's the focus factor that is behind the success. "During this one-year period, the boys are not allowed to do anything but study, study and study. They live in the hostel with no television, no computer. No sports. No movies. Nothing." "We don't even want to," 18-year-old Rahul clarifies. "When you are trapped in a situation where you know you have the intelligence to conquer the world but you are crushed in by your circumstances, you'll do anything to break free."

This is perhaps the true secret behind the success of Super 30. It's a formula that cannot be stolen or emulated. It's an overwhelming yearning, induced by circumstances, to break free—which every member of the Super 30 team comes with. The very basis of the selection is that the candidate has to be from an underprivileged background. Anand's brother Pranab Kumar conducts the verification of claims. Each year 6,000 young boys buy the application form for Rs 60 and submit it in the hope of making it to the Super 30. Candidates then take three separate admission tests to determine IQ, administered in ascending order of difficulty. Of the 500 short-listed initially, 30 eventually make it to the core group. These are the poorest with the most powerful minds.

'We Must Strengthen Our University System, Allow Foreign Institutions In'