Home  »  Magazine  »  National  » gandhinagar, gujarat »  When You Get Hitched By The Tube

When You Get Hitched By The Tube 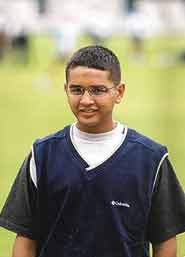 It was a sting operation by a TV news channel to expose loopholes in the old Hindu Marriage Act and Mumbai Marriage Act. But for days together, it had everybody in Gujarat in a tizzy. The channel had ‘married’ off fresh-faced wicketkeeper Parthiv Patel to Richa Harilal Sharma. The news spread like wildfire and put the 19-year-old’s family through considerable embarrassment. A "shellshocked" Parthiv and his "stunned" family had a hell of a time denying the marriage after a major Gujarati daily carried the news. Quoting the TV channel, the paper reported the marriage had been solemnised at the old Ramnath Temple in Rajkot on September 16. The same day, the alliance was registered at the registrar’s office.

As the news broke, the phones just wouldn’t stop ringing at the Patel household. "How can I marry when I’m only 19? I’ve not visited Rajkot for months, let alone on September 16. I was very much in Ahmedabad that particular day," was Parthiv’s immediate reaction. "Show me my wife. I’d like to meet her and see how she looks," he later said jokingly after recovering from the initial "shock".

But mere denial wasn’t enough. The "marriage" has been officially registered. Parthiv’s father Ajay Patel and uncle Jagat Patel had to rush to Rajkot from Ahmedabad with an army of legal eagles to sort the matter out. It didn’t take them too long to find out the facts and heave a sigh of relief. According to the official marriage certificate, Parthiv’s age was 24 years. The ‘bride’ was shown to be 19. Interestingly, the document shows Richa’s address to be that of Parthiv’s. On further inquiries, it was also established that no marriage had taken place at the Ramnath temple.

Parthiv’s family cannot understand why their son was singled out. It was not until Sahara Samay Rashtriya, the news channel in question, admitted on September 21 that it was a "sting operation" that rumours died down. But it took them days to come out with it. It’s a mystery why the channel didn’t say upfront that it was a sting operation and save the Patels the embarrassment.