When The World Met The Dravidian Family

This is also the bicentennial of the event that made the Dravidian identity possible: the publishing of proof, in 1816, that this was a distinct language family

India had long developed a sophisticated linguistic science—more advanced than that of other ancient civilisations. Analysis of Sanskrit is associated with the great linguist Panini, in the north. In the south, analysis of Tamil with Tolkappiyar. The grammars of these two are but the highest peaks of a mountain of linguistic scholarship in ancient India.

For the north, the original impetus was the need to replicate exactly the hymns of the Veda. For the south, it was to establish rules for poetic language, based upon the ancient anthologies of Tamil courtly poetry, the Sangam Literature as it is called.

Indian linguistic analysis had made significant breakthroughs. It provided the basis for the logical sequencing of the Brahmi script, from which most scripts of India are descended, as well as scripts used in Tibet, Mongolia and most of Southeast Asia, as far east as the Philippines. Indian linguistics was carried to China by Buddhist monks, where it was used to recover the original sounds of the ancient poetry of China.

When the East India Company established itself at Calcutta in the eighteenth century, the Indian and the European analysis of language came directly together.  Sir William Jones, who came to India having learned Latin, Greek, and Persian, studied Sanskrit at Calcutta and apprehended how similar they all were.  He was inclined to interpret the similarities among languages in terms of a family tree of relationships, and the encounter with Indian linguistics gave him tools to make comparisons.

Jones said, in a famous address to the Asiatic Society in 1786, that the similarities among Sanskrit, Greek and Latin were so strong, both in verbal roots and grammatical structure, that no scholar of language could examine them without believing them to have been descended from a single language, “now perhaps lost”, and that the same might be said of Gothic (old Germanic), Celtic and Old Persian.  Thus, these languages and their descendants in Europe, Iran and India were related by co-descent from a lost ancestral language, which scholars have since given the name Proto-Indo-European.

This idea was to have a profound effect on linguistic science. It was quickly consolidated in Europe by Franz Bopp, who published a comparative grammar of Indo-European in 1816, and Jacob Grimm, whose grammar of German (1819) established “laws” of sound shifts which differentiated the early Indo-European languages from one another. All this established a reliable, scientific basis for the comparison of languages and the working-out of family relations among them. The linguistics of ancient India provided the essential analytical tools for this accomplishment, especially analysis of phonology or the sounds of languages.

Now, scholars at Calcutta assumed that all languages of India were descended from Sanskrit. But F.W. Ellis, Collector of Madras and founder of the College of Fort St George at which new recruits of the East India Company were taught Indian languages, disagreed.  He developed the concept of the Dravidian language family, publishing a proof in 1816, going to show that the languages of the south, while they contained many words from Sanskrit were nevertheless not descended from it, but were related to one another as a family in the way Jones had posited for Indo-European. 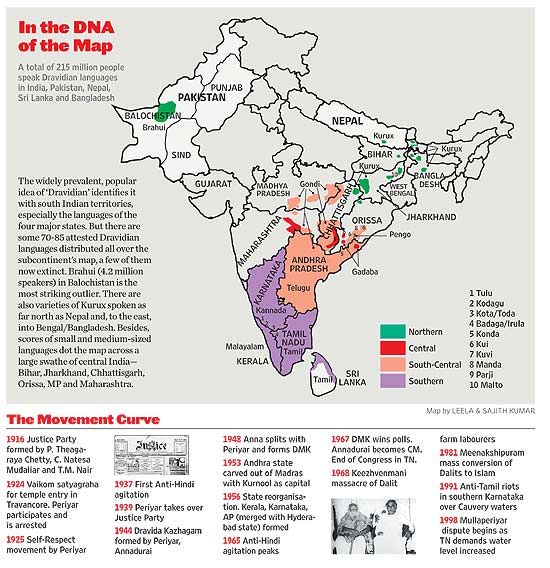 Ellis expanded upon this line of reasoning to develop a proof that Telugu and Tamil are of common origin, and although they contain many words that come from Sanskrit the languages at the core are members of a language family distinct from Indo-European. This is the language family we call Dravidian.

The Dravidian proof of Ellis rightly identifies as Dravidian Tamil, Telugu, Kannada, Malayalam, Tuluva, Kodagu and a small island of Dravidian far to the north in Rajmahal, Malto.  The later book of bishop Robert Caldwell, A Comparative Frammar of the Dravidian or South-Indian family of languages (1856), consolidated the work of Ellis and extended it systematically to other Dravidian languages.

An isolated Dravidian language that was found is Brahui, spoken among Muslim pastoralists of the Indus valley in Pakistan. It has subsequently become clear that Dravidian languages were widely spoken over much of north India in ancient times and that Sanskrit words such as mayura (peacock), pinda (ball) and danda (stick) were borrowed from Dravidian.

But the connection of the two is not close, and the one did not lead directly or quickly into the other. It is a paradox that Shankara Shastri, a Brahmin, played a significant part in the development of the concept of the Dravidian language family, while the Dravidian movement of a century later was directed against the hegemony of Brahmins in government.

As for Ellis, he had Brahmins in the collectorate and the College of Fort St George with whom he worked closely, but he also promoted the appointment of non-Brahmin scholars in the college, encouraged the printing of works on the south Indian languages, collected manuscripts in Tamil and Telugu for the college, and projected the publication of a translation into Tamil of an important Sanskrit work of law, the Mitakshara, to enable non-Brahmins to become lawyers in cases of Hindu law, entering a profession especially dominated by Brahmins.

(Prof Trautmann is a historian specialising in ancient India. Further detail may be found in his book, Languages and Nations: the Dravidian Proof in Colonial Madras, Yoda Press, 2006, or in the Tamil version, Diravidacchanru: ellisum diravida mozhikalum, Kaalachuvadu Pathippakam, 2007.)

Footprints Of The Original ‘Anti-Nationals’