When The Water Touches The Nose

Environmentalism isn't a luxury of the rich, sure. But when he really had to say why, he loses nerve. 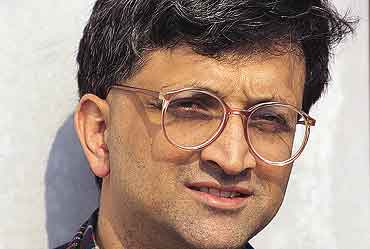 How Much Should A Person Consume? Thinking Through The Environment
By Ramachandra Guha
Permanent Black Pages: 275; Rs: 595
Firstly, the book. Elegantly produced, with Gandhi on the cover peering disapprovingly through his steel rims at a limousine; a Coca Cola logo; and two women, one with shopping bags, another shouldering two baskets with a child in each. And if you’ve missed the point, there are nine chapters within, expounding on sustainability and social ecology.

Now, the author. Ram Guha’s prose is limpid, his research impeccable. In the first chapter, he traces his own journey from sociology, through lapsed Marxism in the radical ’80s of Calcutta, to environmental history and a peripatetic life of academia, archives and field enquiries. He poses a significant question right here—is there something like the "environmentalism of the poor" to counter the dominant view (now promoted by the likes of World Bank) that it is only economic affluence that permits the luxury of environmentalism?

Guha follows this up with the views of his three exemplars: Patrick Geddes, Radhakamal Mukerjee and J.C. Kumarappa. Geddes was a polymath town planner without a degree; Mukerjee taught sociology in Lucknow; and Kumarappa trained in accountancy and public finance. Yet they had much to say on social ecology; and were ignored by their contemporaries and the political class. Through them, Guha compares Indian and American environmentalism, the first concerned with livelihood and survival, the second with the leisurely pursuits of a consumer society.

This theme recurs as he explores the utopias of agrarianism, the return to the wild and scientific industrialisation, and how they cohabit the space between a society bound by ecological limits and another with abundance. He also shows how democracy and authoritarianism form the political underpinnings of these utopias, how these are rooted in the debate on development, how the construction of the railways affected forest management and how the conservation movement inspired by one form of society has imposed its will on others.

Guha then looks at social ecology itself, through the views of Lewis Mumford, Chandi Prasad Bhatt and Madhav Gadgil. Mumford, whose faith in science and technology is eroded over the years, is neglected by his American peers because he says the "enemy is us". Bhatt is the pioneer of the Chipko movement, critical analyst of how science can be both misused and used, and again largely uncelebrated. Gadgil, on the other hand, is a biologist, has written extensively on indigenous conservation systems, forest policy and biodiversity, an active advisor of the Save Western Ghats March, and yet his advice eventually failed.

So far so good. Guha writes exceedingly well, with wit and erudition. He is acquainted, either personally or through their writings, with a galaxy of thinkers, academics and activists. Personalities like Ambedkar and Galbraith, Bookchin and Elwin rub comfortable textual shoulders with Agarwal and Akerlof, Balagopal and Brandis. Guha is well-read; his study of the classics redoubtable. Which is why one waits with great expectation for his final chapter, ‘How Much Should a Person Consume’, hoping he will answer his original query on an environmentalism of the poor.

In vain. Guha instead turns to preaching. And thereby faults his own credo: "Environmentalists may wish to change the world, but environmental historians should seek merely to understand and interpret it." He also bears out Eugene O’Neill’s opening quote, "... it’s all questions and no answers". He churns out a six-tablet prescription of participatory democracy, with transparent processes of natural resource use, mixed with political decentralisation, private enterprise without hidden subsidies, sustainable policies, and taken with liberal doses of land reforms, literacy and healthcare.

In these last 30 pages, Guha throttles the vitality of the previous 220. There is no academic rigour here. No attempt to discover what political decentralisation has done, how participatory democracy has unfolded, where private enterprise clashes with social ecology. There is no carefully constructed logic of thesis and antithesis, no synthesis of thought, no real dissection of the politics of the environmental endeavour. Guha airily states that the "retreat of the state from the economy has led to much faster rates of economic growth", ignoring the voluminous literature on it. He subsumes the "fallacy of the romantic economist" and the "fallacy of the romantic environmentalist" with what may best be called, in a parody of his own language, a peculiar ahistorical "fallacy of the romantic sociologist". One wishes he hadn’t done it.