Home  »  Magazine  »  National  » washington, usa »  When The Parade Picks Up The Frock

When The Parade Picks Up The Frock 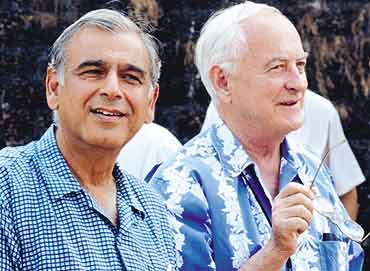 outlookindia.com
-0001-11-30T00:00:00+0553
Ismail Merchant shared 45 long years with James Ivory in a steady relationship, spanning both the creative and the romantic. But when Merchant died in May, the mainstream press tended to either suppress the fact of their sexual orientation or whitewashed over it in the obituaries. But the gay press isn’t having any of it, they are up in arms and debating "why the most enduring and influential gay partnership in film history" wasn’t considered a newsworthy detail by the New York Times and the Washington Post.

The Washington Blade, the capital’s premier gay newspaper, researched the subject to point out that the Post "not only doesn’t mention the pair’s romantic connection, but also pulls a quote from an old interview Merchant gave about having a ‘crush’ on an Indian actress". News agencies Reuters and AP mentioned that Merchant and Ivory were partners but didn’t explain the extent of their partnership. The Daily Telegraph said Merchant never married but was "in every sense a family man" with numerous nieces and nephews. It went on to say that his relationship with Ivory and Ruth Prawer Jhabvala—both of whom had apartments in the same building—was "identical to that of a family". Chris Crain, executive editor of the Houston Voice, another gay newspaper, called this "straight-washing of gay artists" in an editorial.

Another writer mentioned that so enduring was Ivory and Merchant’s love for each other that many people assumed Merchant-Ivory was one individual. Yet, most readers were "protected" from the fact. The squeamishness of obit writers may have come from Merchant’s own preference to keep it all private. When asked about being gay, he told an Indian interviewer, "I don’t care...if people want to make me gay, they can make me gay. Or heterosexual or bisexual." And it wasn’t that they shied away either—Maurice and The Bostonians had gay relationships.