When The Eyes Locked In 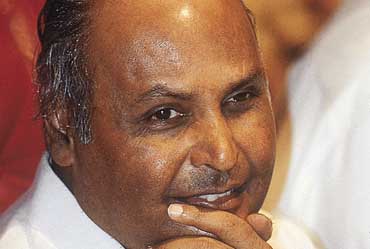 outlookindia.com
-0001-11-30T00:00:00+0553
In 1984, Nitin Desai at the Planning Commission put me in charge of a major study on the state of India's textile industry. After visiting some 50 mills in India—including Reliance's facility at Naroda, near Ahmedabad—and meeting hundreds of experts from the industry and its myriad associations and research bodies, I was asked by an official at the Textile Commissioner's office whether I wanted to know the 'real' story about the industry. I agreed, and a meeting was fixed with Rasikbhai Meswani, who was Dhirubhai Ambani's brother-in-law and then the number two man in Reliance.

A short man with a paunch, a razor-sharp mind, an infectious grin, tons of data and information, and a fondness for shiny white safari suits, Rasikbhai became my textile guru. He taught me all that I needed to know about yarn sales, powerlooms, and the byzantine politics of the industry. One day in the winter of 1984, he took me across the corridor to meet his brother-in-law.

It was a huge office room. Dhirubhai walked across, shook hands, and we sat perpendicular to each other on sofas. For the first 20 minutes, he asked me innumerable questions about textiles to get a fix on how much I knew, and where I stood on certain issues. Satisfied, he then unveiled his plan of backward integration. Remember that we are talking about the end of 1984, when Reliance just had a brand name called Vimal, a textile mill at Naroda and a fledgling plant at Patalganga. And here was a man spelling out his vision of creating a petrochemical giant that would begin with cracking crude oil and naphtha and end with textiles. I was spellbound by the sheer audacity of his vision.

It was during this first meeting that I noticed Dhirubhai's eyes. I'll never forget those eyes—bright, jet black and incandescent that locked on to you and took everything in. Nor will I forget his mind. Suddenly, in the middle of his explaining the need for backward integration, Dhirubhai asked, "Achcha, what do you think of gold?" I was completely nonplussed. And then he spelled out a project of using the gold hoard of Indian households to create a currency of savings which could be used to fund infrastructure. In 1984, amidst his dream of creating a petrochemical juggernaut, he was conjuring a scheme for developing a market for tradeable gold bonds.

In the years that followed, I met Dhirubhai several times. The speech impediment after his 1986 stroke neither diminished the incredible power of his mind, nor the glitter of his eyes. We would talk on various topics—the state of the deficit, about financing infrastructure, on the quality of government administration, and gossip about ministers and business barons. All of these punctuated with smiles, guffaws, touches, homilies and some wonderfully coarse abuses. A few years ago, one evening at Sea Wind, he suddenly asked, "Omkar, what is India's greatest shortage?" Again, I was totally taken aback. In a trice came the answer, "Water". And, as before, Dhirubhai began outlining a vision of large-scale desalination. The idea was as simple as it was amazing. Thermal power plants waste huge amounts of energy through generating inefficiencies. Dhirubhai's plan was to harness the wasted energy, otherwise released to the atmosphere, for running desalination plants throughout coastal areas—and it was costed in a way that would be far cheaper than alternate sources of water. "So, what's the problem?" I asked, "why don't you execute it?" "Saalon ko to samajhna chahiye" was his answer—a brutal comment about the imagination in government.

Here was a man with a hyperactive brain, always looking for big opportunities. He perennially conceived projects that were beyond the pale of his business peers. Having done his financial homework, Dhirubhai had the guts to bet everything on the project—body, soul, money and all.He was blessed with an incredibly talented, target-driven and fiercely loyal team, led by Mukesh and Anil, that could execute every aspect of each of these projects in record time. His dictum was simple: "Karna hai. Karkey dikhana hai." It is this that drives Reliance, and has made the company what it is across every inch of the petroleum, petrochemicals and telecom space.

At the same time, Dhirubhai was a very warm human being for whom relationships mattered a great deal. In 1984, I was a callow assistant professor at the Delhi School of Economics; he was already a business legend, with glory and warts depending on which side of the fence you belonged. Yet, he treated me with extreme kindness and concern; he challenged me; and was only too willing to be challenged by me. There wasn't a trace of hierarchy. Just insatiable curiosity and the desire to learn something new, irrespective of whom it came from.

Many years later, when Mukesh and Anil were being felicitated as Business India's Businessmen of the Year, and the patriarch was basking in the glow of his sons, I asked Mukesh how he was going to redeem the 100-year Yankee Bonds that Reliance had recently issued. What kind of business could justify taking on that kind of liability? I'll never forget Mukesh's answer. "Boss, we got to have businesses of scales where at least 20 per cent of India's population must deal with Reliance in some way or the other every day of the year. That's what we have to do. The rest will take care of itself." Sitting on his trademark red leather chair, Dhirubhai nodded vigorously in assent. After all, it was pure Dhirubhai.

That's what dreaming big is all about. These were the dreams of people like Jamshedjee Tata, Ghanshyamdas Birla and Walchand Hirachand. And a Dhirubhai Ambani—the petrol pump attendant at Aden with imagination, guts, dreams, execution skills and eyes that never left you. I'll never forget him. Nor will India. n