When The Ash Settles

Kashmir’s Islamic Sufi tradition is under siege from various comers 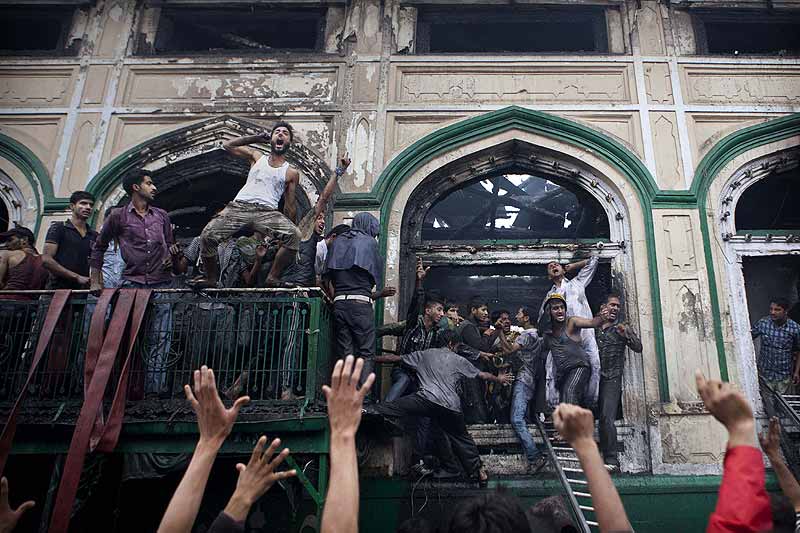 The smoke that billowed out of the burnt Sufi shrine and disappeared with the wind could perhaps be a metaphor for a larger question of identity that troubles Kashmir. Have the people of the Valley learnt to move on despite provocations and crises? In the wake of the destruction of the 200-year-old shrine of revered Sufi saint Sheikh Syed Abdul Qadir Jeelani in downtown Srinagar, it did seem like the people were displaying a new resilience.

The mysterious fire that reduced the wooden structure to cinders on June 25 (the police haven’t ruled out sabotage yet) was followed by what appeared to be a familiar design to throw the Valley into turmoil. Shadowy forces tried to add fuel to the fire by desecrating the Quran at a Shia shrine in Srinagar’s outskirts. Yet the people remained calm. The stone-pelters of 2010 held their peace. For all the little troubles that have erupted, tourism this year has touched a new record.
Still, there is a great sense of sadness over the fire. “The shrine’s destruction is a loss for Islam as well as Kashmir because Syed Abdul Qadir Jeelani fundamentally represented a certain vision of spirituality in the state,” says Abir Bazaz, a scholar working on the history of mysticism in Kashmir.

In the last few years, there have been several narratives about the changing nature of Islam in Kashmir. Stories appeared saying the strident Wahabi school—which is fundamentally opposed to Sufism—is gaining a grip over the Valley. Yet the fact is in Kashmir even the Wahabis have to accept the local Sufi heritage. Ghulam Rasool Malik, president of Kashmir’s leading Wahabi organisation, the Jamiat Ahle Hadith that runs around 800 mosques and 150 schools, mourns the shrine’s destruction. He may be linked to certain organisations but he doesn’t want to be called a Wahabi. “This is a national loss. We share the grief and pain of our fellow Muslim brethren. Besides, it was a heritage structure and we demand an independent probe into the mysterious blaze,” he says.

Hardline Hurriyat leader Syed Ali Shah Geelani of the Jamaat-e-Islami, which is seen as keen on the articulation of Islam as promoted by the state of Pakistan, says “the so-called religious leaders who preach sectarianism are doing a disservice to Islam by creating divisions among Muslims. People must remain vigilant of such divisive forces. This is hardly the time for Kashmiris to fight over religious matters”.

“It’s business done in religion’s name. Those who play into the agencies’ hands can’t claim to be custodians of our Sufi legacy.”
Zareef Ahmed Zareef, Kashmiri poet

But even so, the fact is that in the last few years there has been a sharpening of differences over questions of belief, practice and politics. The assassination of Jamiat Ahle Hadith president Maulana Showkat Ahmad Shah in 2011, in very controversial circumstances, marked a turning point in these tensions and deepened some of the new sectarian faultlines. The undercurrents of anger and intolerance have also seen murder attempts on at least two imams associated with the Barelvi school of thought. Though the culprits are widely believed to be locals, the blame is directed at New Delhi as many Kashmiris are convinced the Centre has been fanning sectarian fires in the Valley and encouraging the proliferation of the Barelvi school.

Meanwhile, an incident last week highlighted the growing streak of intolerance in the Valley. The Jamaat-e-Islami issued a statement asking the tourism department to instruct visitors not to wear revealing clothes “contrary to the local culture and ethos”. This was folllowed by Geelani demanding that foreign tourists, especially Israelis, be discouraged from visiting the Valley.

Yet it’s clear that in the complex matrix that is Kashmir, it’s not just the Wahabis who are playing for mindspace. There are also the Barelvis, a mainstream Indian order that accepts grave worship and other Sufi practices. Some Kashmiris believe it is with official patronage and under the pretext of preserving the Sufi way that previously unknown Barelvi groups like Minhajul Islam are mushrooming in every nook and corner. Minhajul chief Maulana Mohiuddin Naqeeb himself admits that “we are here to resurrect Sufi Islam”. The group is part of an amalgam of 45 Barelvi outfits founded a few years ago called Karwan-e-Islam. They seem to have the resources to book huge ad space in local newspapers and hold massive gatherings almost on a daily basis with people bussed in from far-off places. “It’s been a Barelvi spring awakening for Kashmir,” a top Delhi newspaper reported recently.

Locals, however, see a clear distinction between state-sponsored Sufism and their indigenous Kashmiri way of life. What is missing in this game, says Kashmiri poet Zareef Ahmad Zareef, is the “soul of Kashmir” that is the Rishi order, exemplified by the Shaivite lady philosopher and poet Lal Ded, whose great follower was Sheikh Nooruddin, the most influential Sufi in the Valley. Zareef elaborates, “The Rishi order had an unmatched contribution in our socio-cultural and political consciousness. We were a melting pot of religions, civilisations...we didn’t kill each other in the name of sect or religion.”

Political uncertainty, though, upset this value system. As Zareef says, “Earlier, it was political outfits mushrooming with the backing of one agency or the other. Now, unfortunately, it’s business done in the name of religion. These so-called religious outfits are far from the spirit of Islam as known in Kashmir. Now there are even imams from the Arab world at their gatherings. Those who play into the hands of the agencies can’t claim to be custodians of Kashmir’s Sufi moorings.”

People are suspicious of stories that tell the tale of the changing religion in Kashmir. Besides the fingers pointed at “imported” religious outfits, there is a belief that the attempt to divide the people on sectarian lines dates back to the tumultuous tenure of former Kashmir governor, Gen S.K. Sinha. “We revere the Sufi strain of Islam, especially of the Rishi order in Kashmir,” Sinha had said while inaugurating a renovated Shia shrine in Budgam district in May 2007. It was Sinha again who, despite opposition from several groups, cleared the setting up of an Islamic university in Kashmir under the Jamiat Ahle Hadith banner (the bill is yet to be pass the state assembly, though). In 2007, the army directly took upon itself the renovation of shrines as part of its ‘Operation Sadbhavana’. But after spending around Rs 60 lakh, the army had to cancel the mission after a fatwa by a local cleric that only Muslims may carry out such work on holy sites.

So what we have is a bizarre situation where the Pakistan state is believed to be advocating the conservative strain of Wahabism. The phenomenal rise of the Jamaat-e-Islami and Ahle Hadith is attributed in part to foreign funding. The Indian state has been countering this with the Barelvis. In between is the delicate strand of Kashmir’s own unique brand of Sufism, one that accommodated all and raised so many philosophical questions about human existence. Political analyst P.G. Rasool is still hopeful, “Just as you can’t manufacture a revolution, you can’t impose a religion.”