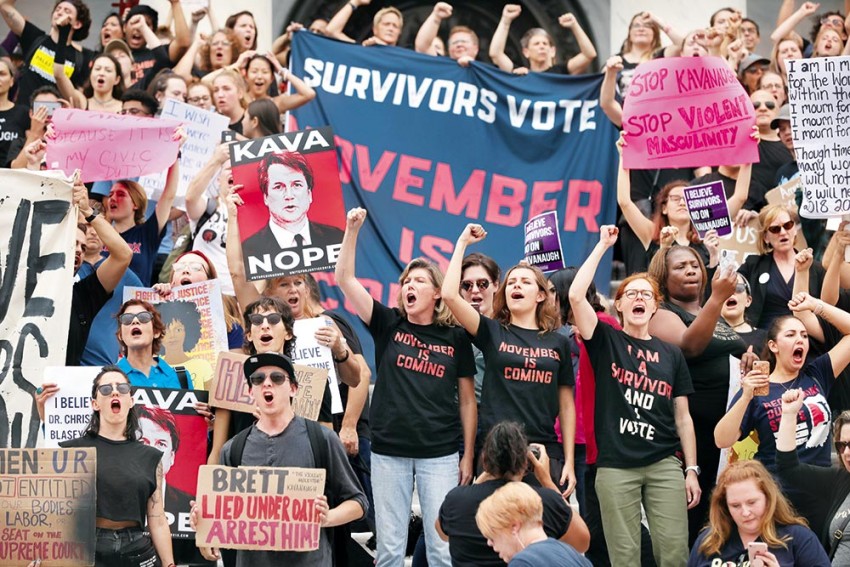 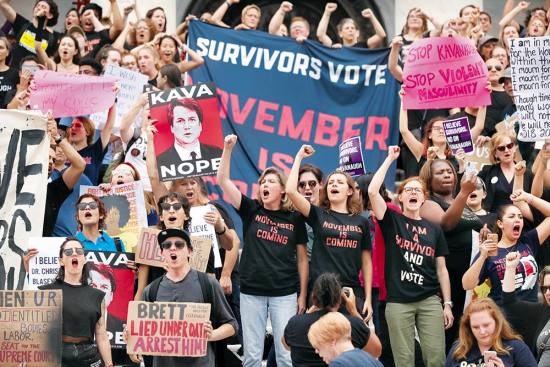 Politics, or the constant need for politicians to recruit, and maintain, supporters to their causes, is a roundelay made of aggression and victimhood in equal measure. Indeed, victimhood is a treasured weapon in politicians’ arsenal. History is replete with examples of leaders targeting designated groups by projecting themselves as the wronged party to polarise, whip up passion and rally support. Demagogues have done this with cynical bluster; politicians in a democracy have subtle, skilful use for it.

In the US, where incumbent presidents have to run a rolling, yearly gauntlet of opinion polls showing one’s ‘approval ratings’, such tactics are a staple of the political playbook. How­ever, few, perhaps, play it better than US President Donald Trump, as Brett Kavanaugh’s recent nomination as asso­ciate justice to the country’s Sup­reme Court displayed it to the American public and people beyond its shores—all avid watchers of the dramatic developments over the past weeks.

Nominated by the American president, a judge in the nine-member Supreme Court—the highest court in the US judicial system—has to be confirmed by a majority in the Senate. The fact that a Supreme Court judge has a lifetime tenure that can be ended only if he voluntarily retires, resigns or is forced out through an impeachment by the US legislators—Congressmen and Sena­tors—makes him a powerful member of the government. As he does not seek re-election, he is free to use his judgment on all key issues that may come before the apex court for review. (About 80 cases from over 10,000 appeals are taken up for review in a year).

Since coming to power last year, Trump has nominated Justice Neil Gor­such, who was confirmed in 2017. With Kavanaugh’s addition to the bench, Democrats and liberal sections of Ame­ricans fear there will now be a pronounced, conservative tilt in the court.

In the past, the Supreme Court has ruled on desegregated public schools, women’s right to have an abortion, sex-based military training facilities, gay marriage and requirement of warrants for police to search cell phones. In 1974, it also ruled against Richard Nixon, saying  that a president is not protected from the judicial process.

But some very important issues, like a baker’s right to refuse baking for a gay person and the president’s “travel ban” from predominantly Muslim countries into the US, are now coming up before the apex court. Large sections of Americans feel a growing unease over these issues; the rift these have caused and how they will be resolved will indicate the direction in which the country is headed. Having a majority of judges in the Supreme Court sympathetic tow­ards one’s stand on such divisive issues is a major political asset.

“Trump’s real power is that he knows how to wield victimhood,” Trevor Noah, host of the popular American TV satirical, The Daily Show on Comedy Central, observes caustically. 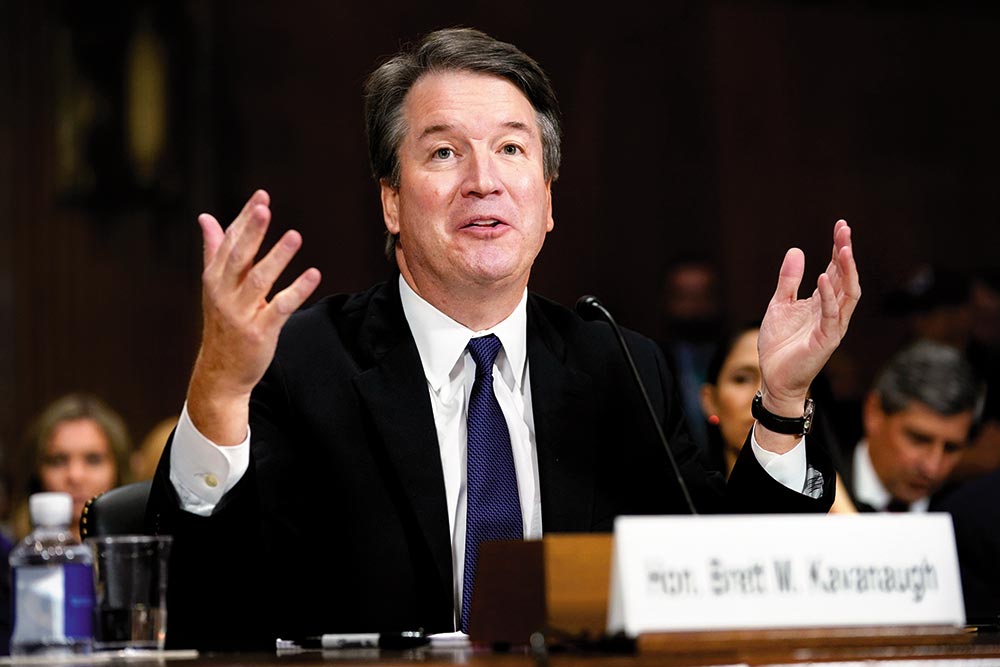 Photograph by AP
With judge Kavanaugh’s ascent to the top court, a clear conservative tilt is expected. It’s a major asset.

When Kavanaugh was accused by several women of sexual misdemeanour and his nomination kept on hold pending a testimony before a senate judiciary committee and an FBI probe, Trump successfully projected his nominee as a victim of the Democratic Party’s dirty machinations. Trump managed to galvanise not only the male members, but also various sections in his Republican support base as he went around trashing the Democrats and Kavanaugh’s critics in one of the most polarised elections for a Supreme Court judge that, significantly, played out under the shadow of a highly charged #MeToo campaign.

The newly-elected 114th member of the country’s highest court was accused by Cal­­ifornia professor Christine Bla­sey Ford of sexually assaulting her. Acc­ording to her, in 1982, an intoxicated Kavanaugh and his classmate, Mark Judge, had pin­ned her down on a bed, covered her mouth and attempted to take her clothes off. All three were in high school then.

The accusation led to a probe by the FBI; divided supporters along party lines and gave a new dimension to the #MeToo campaign roiling America for a year.

But, unlike most other male accused who were said to have misused their position of power to demand sexual gratification, for Kavanaugh the issue was more of ‘moral turpitude’. The potent question raised was whether a person, against whom such a serious charge of sexual misconduct had been levelled, can be fit to be judge of the Supreme Court.

In the 100-member US Senate where, barring two, most senators voted along party lines, Kavanaugh was allowed to scrape through in a 50-48 ver­dict. But the contentious election and the smear campaign spearheaded by the US president against the possible victim of a predator would continue to be debated in a highly polarised US and in countries, like India, where the #MeToo campaign is playing out.

Donald Trump, however, was adamant in his support to Kavanaugh and spewed vitriol on his critics even after he got his way. Calling the confirmation process a “disgraceful situation brought by people who are evil”, Trump described Kav­anaugh as a “great person” and felt it was “very unfair, what happened to him”.

But the heightened drama over Kavanaugh’s confirmation is not the first time the Senate has faced such acri­monious debates over confirming a Supreme Court member since the court’s establishment in 1789. The number in the Supreme Court has also varied from 10 to six over the years, but has remained nine since 1869.

In the past 100 years, there have been nominations that have sharply divided the Senate. One was over liberal judge Louis Brandeis (after whom Brandeis University in Massachusetts is named), who was nominated by Woodrow Wil­son in 1916. More than his views on radical reforms, Brandeis’s nomination was contested (he was confirmed eventually) as he was to be the first Jewish member ever of the Supreme Court at a time of strong anti-Semitic sentiments in the US.

Justice Clarence Tho­­mas’s 1991 nomination also ran into controversy when Okl­­a­­­­homa law professor Anita Hill, who worked for him, acc­used him of sexual harassment. But the confirmation went thr­­­ough and Thomas continues to be a member of the court.

However, the number of votes required to confirm a Supreme Court judge was bro­ught down from 60 to 50 last year when the Trump adm­i­nistra­tion, which has a thin majority in the Senate, realised they will not reach 60 to get Justice Gorsuch a seat.

Now that Trump has won what’s being seen as a significant victory, some observers feel he has hit upon a ‘magic bullet’ in successfully galvanising Rep­ublican sup­­port through the Kava­na­ugh campaign. Until recently, interest among Republican supporters on the crucial November mid-term polls—it could change the composition of the Republican-dominated Con­­­gress in Democrats’ favour—was only around 60 per cent. Now, it has shot up to 80 per cent, inching closer to the 82 per cent interest shown by Democrat voters.

November could well change the pol­itical course of the US. But neither the #MeToo campaign nor the polarisation of the American polity is likely to be put to rest.

Gas And The Greater Game