When India Was Legible

Big Brother helped in the democracy battle. But I can't read more. 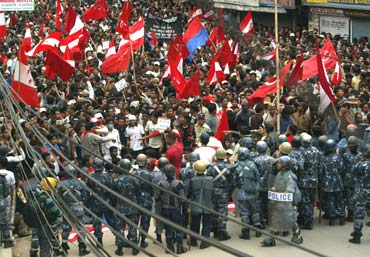 outlookindia.com
-0001-11-30T00:00:00+0553
When things go wrong in Nepal, as they often do, we often blame India. No wonder: entire generations of Nepalis have been raised with the firm belief that our gargantuan neighbour would like nothing more than to annex us as it did Sikkim, or rule us by remote control, as it does Bhutan. At the very least, we believe, India likes to see its neighbours mired in monarchical or military despotism, so as to establish itself as South Asia’s only democracy. Even the friendliest moves by India are therefore interpreted as potential threats.

Our overheated small-country nationalism helps us ignore the fact that we are, in fact, already extremely dependent on India—and we do not always fare badly from this.

I, like many Nepalis, saw this clearly in the aftermath of Gyanendra’s February 2005 military coup. I was among the first Nepalis to leave Kathmandu for Delhi as a personal ‘screw you’ gesture to the executors of the coup. I figured I could embarrass them in the international media. I was confident I would not be alone; and indeed, Nepalis based in Delhi had already staged protests. And other Nepalis soon coalesced there to plot the restoration of democracy....

What none of us had anticipated was the support we would be shown by India. For the Indian government had, till then, helped to normalise Gyanendra’s rise and supplied the military with weapons. After the coup, India promptly reversed both policies. South Block was willing to back democracy in Nepal!

For in the democracy movements of 1950 and 1990, India had ensured the survival of the Nepali monarchy, condemning us to despotism....

My own activism in Delhi was limited to writing, and so I was able to observe my compatriots. Their first Indian allies were in civil society: Nepali misgivings that South Block dictates the Indian media’s editorial line on foreign policy proved false. Editors, journalists and media commentators were already sympathetic to democracy-minded Nepalis, as were the Indian intelligentsia.

Centres of activism sprung up around ardent Nepal hand Bela Malik and PhD candidate Hari Roka at jnu. Both sought to make the most of the cpi(m)’s presence in the Indian government. Indeed, it is hard to imagine that India would have ever facilitated a Maoist-democratic alliance for Nepal without the involvement of Sitaram Yechury and the Indian Left.

Yet, Shyam Saran also proved key. South Block had always seemed a faceless bureaucracy to Nepalis, an impenetrable, unstoppable agent of Indian supremacy in South Asia. But Saran, who had served as a particularly impressive ambassador to Nepal, was serving as foreign secretary at the time of Gyanendra’s coup. Nepalis knew he had a nuanced grasp of Nepali politics; and he must have known that the Nepalis knew so, and were watching him keenly. As Indian policy shifted against Gyanendra, Saran became Nepal’s most important ally in India.

The Nepali political parties soon opened up offices in Delhi, and began to link with corresponding Indian parties. Soon the Indian government was heavily involved in facilitating the Maoist-democratic alliance, ferrying Maoist leaders to and fro from safe houses for meeting after meeting....

Within India, there were of course groups that opposed this alliance, most notably the Hindu fundamentalists. By sheer luck for Nepal, the bjp was not in Indian government. For Nepalis, it was also emboldening to see that the rest of the royalist lobby petered down to a handful of people linked to Nepal by marriage: so-and-so Indian raja’s daughter, given away in marriage to so-and-so Nepali courtier’s son, or vice-versa.

I do not think India’s role in brokering the Maoist-democratic alliance diminished the April 2006 democracy movement that followed, though some Nepalis do say so. (They tend to be of royalist persuasion.) I do think that following the restoration of democracy, and the start of the peace process in Nepal, only the most interested Indians have followed developments here, and tracked their own government’s involvement in Nepal. Nepalis, too, have been too distracted by internal pell-mell to pay close attention to India’s actions.

My favourite rumour is that India is trying, once again, to save the Nepali monarchy. The rumour goes: with the help of the Indian secret services, Paras Shah, the unpopular crown prince, is going to suffer a staged ‘heart attack’, and be evacuated to Delhi for treatment. His father Gyanendra and mother Komal will then visit him, leaving his wife Himani and six-year-old son Hridayendra in Nepal. This will clear the way for the abdication of Gyanendra and Paras, and the crowning of Hridayendra as a ‘baby king’, with Himani as the regent. The monarchy will thus be saved....

I suppose there is no guaranteeing that India’s involvement in Nepal will always be benign and enlightened, as it was in the lead-up to the April 2006 movement. It is up to Nepalis and Indians alike to decode diplo-speak and bureaucratese, and to see if they match India’s actions.

It is unhelpful for Nepalis to give in to knee-jerk paranoia. Of course I know this. But the increasing difficulty of reading India—once again—is making me nostalgic for the days, back in 2005 and early 2006, when India was legible to Nepalis. When we would sit around in Delhi shooting the breeze, marvelling at how easy it was, after all, to make India see things our way.

Thapa is a Nepali writer/novelist, whose books include Forget Kathmandu: An Elegy for Democracy

Objective Observations By A Ludicrous Freak