When Host Is Guest

Indians greet us warmly too, even if all they know of us is via PTV 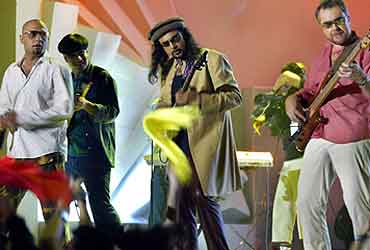 outlookindia.com
-0001-11-30T00:00:00+0553
Reams have been written on the hospitality Indians have received in Pakistan. Now the untold story: what reception do Pakistanis get on their visits to India? My first trip to Mumbai was to shoot an ad campaign for a Pakistani product. I was amazed at the size of the Film City. Yet, I returned to Karachi feeling my city was a paradise: Mumbai in May had been hot and humid, the traffic crazy, the cars small, the poverty overwhelming. The trip’s highlight was listening to an overweight Parveen Babi narrate the story of her life.

On my second trip there I hooked up with ace designer Tarun Tahilani, met Salman Khan, hung out with Sangeeta Bijlani and Somy Ali, and went to a Bryan Adams concert. From there I went to Goa. What a place! Suddenly, I was in love with India.

On the third trip, a Pakistani designer and I were guests of the Pakistani High Commission. It was a real treat to see Delhi, stay at Pakistan House, visit Jaipur, pray at Ajmer and see the Taj Mahal. In Delhi, we managed to shoot with Ritu Beri, Suneet Varma, Rohit Bal and J.J. Vallaya. Our new-found friendships miffed our hosts; we had to find another place to stay.

What about others? When Pakistan’s biggest rock band Junoon visited India for the Zee Cine Awards in 1998, they were apprehensive about going into ‘enemy territory’. But their fears were allayed at the immigration counter: the officers asked them for autographs. "At the awards, Kajol danced when we performed, Juhi Chawla came over to the dressing room to speak to us. The adulation was insane," says band manager Sherry. Recently, in December 2003, Junoon performed Yaron yehi dosti hai with Indian band Euphoria. For the show, the Pakistani and the Indian flags were sewn together.

But Junoon has had its share of problems with their Indian shows. On May 13, 1998, two days before its concert in Delhi, India conducted its nuclear test. Shocked to find a Pakistani band in Delhi, a foreign correspondent asked band singer Ali Azmat how he felt. He replied, "When I’m on stage, I have no nationality." The Pakistani papers reported him saying, "I have no nationality." Junoon was banned from Pakistani airwaves and television. Today, President Pervez Musharraf is a big fan of theirs. At a recent Royal Albert Hall concert he was on his feet when the band played Jasba-e-Junoon on his request. The band’s lead guitarist, Salman Ahmed, is currently in his ancestral hometown of Patiala to shoot a video with Indian singer Shubha Mudgal. Incidentally, a road in Patiala still has the name of his great great grandfather, Naamdar Khan.

Strings’ vocalist Faisal Kapadia says India doesn’t even feel like another country, and blames the media for creating the negatives. He feels the misconception about Pakistanis in India is largely because of what they see on PTV. "We were often accosted with questions like: do you guys have colour TV? Do you have four wives?" he says.

But playwright Imran Aslam, who is the president of Geo television channel, says differences between the two countries are evident. "There they ask you whether you’re a veg or non-veg? NON is a negative word, I mean if you eat meat you’re in a negative category," he fumes. Imran says he can’t forget what happened to Muslims in Gujarat; that though he has great friends in India, he feels Indians are "black, smelly, wear chappals, scratch between their toes and have talc in their cleavage". Dismissive of the ‘hum ek hi log hain’ business, he rants, "The greatest justification for the creation of Pakistan is the creation of Bangladesh. The only reason Jinnah made Pakistan was that the Javed Miandads could play cricket! Aamir Khan’s fictitious sixer in Lagaan is real-life Miandad’s historical play." Yet, his own Geo TV has pioneered India-Pakistan mix programmes: Noor Jehan’s song Gayegee Duniya Geet Merey is the title to a production featuring Anu Kapoor.

Top Pakistani actress Atiqa Odho says her interaction with the Indians began before she became a celebrity. "There was this fascination for us Pakistanis because so few of us had been there. But I found no difference." When she participated in Zee TV’s Antakshari, she was dubbed a traitor. And in India she had people walking up to her and saying, "Men are so lucky in your country, they can have four wives." Now Indians are amazed to see a Pakistani women commando force. Like many others, Atiqa thinks media and the showbiz could change the way Indians and Pakistanis look at each other. I agree. Really, we need more films like Pinjaar as opposed to Border and LOC.

(The author writes on fashion and society for The Friday Times, Lahore.)