When Hawks Soar And Doves Cry

It's you're either with us or against us again. And nobody wants to be against the US. More Coverage 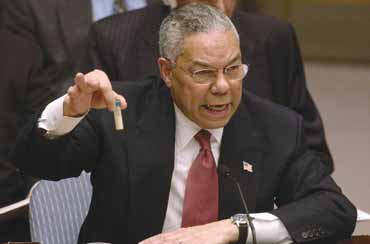 outlookindia.com
-0001-11-30T00:00:00+0553
It was Washington's last-ditch attempt to score a victory on the battlefield of diplomacy. And UN officials, long accustomed to sitting on the fence, were certainly being spineless when they threw a blue cloth over a reproduction of Picasso's anti-war painting, the Guernica, which hangs at the entrance to the Security Council, prior to US Secretary of State Colin Powell's speech on February 5. How could they allow him to convince the world to bomb Iraq amid the graphic images of mutilated women, children and horses, of war and devastation?

Obviously, there couldn't have been anyone better than Powell to articulate the pro-war argument of Washington that is dominated by inveterate, incorrigible hawks. But overnight, the Bush administration's lone dove of peace too sprouted claws, warning that it was a "matter of weeks, not months" before America attacked Iraq, regardless of how the world reacted to his damning evidence against Iraq. Even before Powell began to speak, it was known what his verdict would be: that Saddam Hussein is a threat to humanity.

Using two giant screens and a hi-tech show of satellite imagery, drawings and scratchy intercepted telephone conversations in Arabic, Powell made a dramatic 80-minute presentation to demonstrate a pattern of Iraqi deception. Though much of the evidence from defectors and prisoners pointing to a systematic evasion of UN inspections and a continued build-up of weapons of mass destruction (WMD) was not new, Powell used recently declassified intelligence to bolster the case against Saddam.

Few expected a smoking gun, and there was none. Only blurred satellite photos and drawings of mobile chemical and biological facilities, 1,000 tonnes of chemical agents that had gone missing, and the production of 100 to 500 tonnes of nerve agents. Powell used a vial of talcum powder to stress the fact that even a small amount of anthrax could shut down the US Senate and that Iraq had enough of the deadly white substance to wreak havoc on the world. In an attempt to appease anti-war Americans at home, he devoted much time to link Iraq to the activities of Al Qaeda.

Yet, few were convinced with the belaboured links and tenuous evidence that the war against terrorism and the war against Iraq were one and the same thing. "This remains a weak link in Powell's deposition," a senior US official admitted to Outlook. "But it is not far-fetched, and Americans will be more inclined to support a war if it saves them from a repeat of September 11."

Taped telephone conversations in Arabic crackled eerily through the room, full of diplomats tense at the prospect of war. The phone intercepts disclose a senior Iraqi military official ordering his subordinates in the field to destroy documents and "remove" the expression "nerve agents", whenever it surfaced in wireless instructions. All of this, asserted Powell, constituted the repeated material breach of Resolution 1441 which, according to American and British interpretation, would enable military action against Iraq without further voting by its members. Iraq's bad faith and threat to the region and beyond, he added, were "irrefutable and undeniable".

There's a story doing the rounds in the US that isn't funny at all. Powell, when told that his boss is in bed by 10 and sleeps like a baby, reportedly shot back: "I sleep like a baby, too—every two hours I wake up screaming." The very fact that Bush has chosen Powell to carry the message of war shows there's no turning back now, says a state department official who works with this highly-respected former general. His argument: it was Powell, after all, who over eight weeks of hard bargaining and a hundred telephone calls to international leaders had secured the unanimous support for UN Resolution 1441, which sent weapon inspectors back to Iraq.

Despite the tone of urgency, Powell seemed unable to convince the war sceptics. The envoys of France, Russia and China—all veto-holding members of the Security Council—said the new evidence only reinforced their view that the inspectors needed more time to complete their work. France and Russia do not refute assertions that Iraq is hiding some weapons. But they have yet to be convinced that the threat is serious enough to warrant a war. "The presentation does include some clues for the inspectors to work on. But that does not mean inspections should stop and war be declared," a senior UN diplomat from Europe told Outlook. While Russia suggested that the US hand over the information to UN inspectors for verification, France wanted the inspections regime to be reinforced.

This divide in the Security Council is more problematic for the UN than it is for the US. Though Powell did not seek a second resolution to specifically authorise a strike on Iraq, America, say experts, has directly challenged dissenters, especially among its allies in Europe, that it would go to war regardless of their stalling tactics. "The US has the upper hand because President Bush is prepared to go to war with or without the support of France and other members of the Security Council," says a senior fellow at the Institute for Strategic Studies, London. "There is already talk of France turning around." In other words, opposition to the US in Security Council makes sense only if it can stall war; if the US were to go ahead regardless of the opinion of others, then many might think it prudent to support its war intentions.

Predictably, Iraq issued an angry, self-righteous rebuttal of Powell's speech. In his first televised interview in 12 years, broadcast on the eve of Powell's presentation, Saddam denied that Iraq possessed any WMDs or had any links with Al Qaeda. On Thursday, Amir al Saadi, Saddam's chief scientific advisor, dismissed the evidence presented by Powell as intended for "home consumption and for the uninformed". He said Powell's remarks had contained "convenient omissions" and that Iraq would not grace the telephone transcript evidence with a response as it was "beneath the level of a superpower" and "any third-rate intelligence agency could fabricate it".

Experts say Powell's speech, followed by a reiteration in Washington before the Senate the following day, was a clear indication that there was no turning back for America's leaders. "America has looked squarely in the eyes of its allies and said, either you're with us or against us, and most countries will come around because nobody wants to be against America," Charles Pena, director of Defence Policy Studies at the Cato Institute in Washington, DC, told Outlook. "Yes, war is inevitable. From a domestic perspective, everything is in place. Militarily too, American and British troops have moved into the region, and Turkey has agreed to open the country's bases to American combat troops."

The next milestone in what many US officials regard as a march towards war will be the report of the two chief weapons inspectors to the Council on February 14. A lot will hinge on the visit of Hans Blix and Mohammed ElBaradei to Baghdad this weekend and whether Saddam will relent. On Thursday, Iraq announced a series of quick concessions to appease the inspectors, granting scientists permission to be interviewed in private for the first time and allowing the use of U2 surveillance planes by inspectors.

"We're all waiting for Valentine's Day (February 14)," says a weapons inspector, who has just returned to New York from Baghdad. "But none of us anticipate good news." And good news for most is to disarm Iraq without going to war—and dissuade Washington from being trigger-happy.Towards the end of the week, US President George Bush declared that Saddam's "game is over". It's now the story of a war foretold.