Harry's fluent in Bengali too. But pirates are running for cover 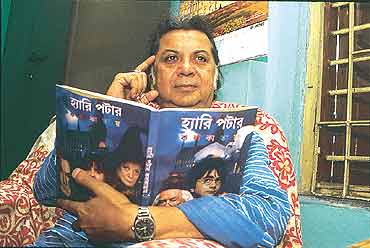 outlookindia.com
-0001-11-30T00:00:00+0553
If you are mad about Potter, but can’t afford the book or were late to the bookstore, don’t despair. You might have some real quirky choices. Like, say, Harry Potter stories that J.K. Rowling never wrote. Take, for example, Uttam Ghosh, a Calcutta-based journalist-turned-writer who wrote Harry Potter Kolkataye (Harry Potter in Kolkata) where Harry, believe it or not, meets famous fictional characters from Bengali literature. Then there are translated pirate editions: another Calcutta publisher came out with Harry Potter O Parash Pathar, a Rs 50 unauthorised translation by two obscure local writers of the first book, Harry Potter and The Philosopher’s Stone.

The dons of book piracy may work out of Delhi, Mumbai and Bangalore, but it’s in Calcutta where Potter piracy is at its creative best. Ghosh’s homespun Potter story and the translation jointly sold some 15,000 copies before Bloomsbury’s copyright lawyer came visiting the publishers in the city’s crowded College Street book district and warned the two publishing houses who were bringing out the books to stop, or else. They did.

Ghosh, 58, son of Subodh Ghosh, famous Bengali author of such stories as Ajantrik which was filmed by Ritwik Ghatak, is unfazed. "I will now create my own Harry Potter," he says. "Can you suggest a name? I wish I had been as smart as a Russian author who’s named hers Potter Tanya Grotter." He’s possibly unaware that Rowling has already won a court case to stop this Russian Harry Potter-like book about a girl wizard and her days in a witch school called Abracadabra.

Ghosh is also hurt that his book has been ‘banned.’ He just can’t understand why Rowling, who’s richer than the Queen, could object to his poor man’s Potter that costs only Rs 30. "My book is about a young lad called Jhontu who doesn’t get tickets to the latest Harry Potter flick. So he goes to bed with the book tucked under his pillow. Harry appears to him in a dream and narrates the entire story to him."

Ghosh’s ‘story’, however, is a total lift from The Philosopher’s Stone. The publisher even lifted 16 stills of the Warner Brothers film and put them on the cover and inside. Ghosh now plans "to pursue writing full time." His forte, he says, is reinterpreting classics—he has a book called Mr Chatterjee’s Lover. He’s also written what he called "erotica"—one book’s called Nishiddho Swad (Forbidden Taste). Right now though he’s forbidden to lift Potter.