The result's a Riot. But far too clinical, Tharoor's 'novel' evokes little. 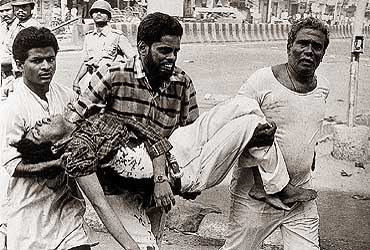 Serving up Oriental homelands for western delectation earns writers and publishers huge profits, because such books are marketed internationally as adjuncts to the tourism industry. It is to the great credit of Shashi Tharoor that Riot is not written as an offering of globalised Orientalism. Nor does it surrender ancestral memories to the ravages of international publishing conglomerates. Instead, the book is a polemical statement. Through it, Tharoor advances his arguments about what should constitute the modern Indian nation. (Down with Hindutva, of course).

Shashi Tharoor is, deservedly, a much-admired columnist. His insightful and original views have opened many eyes, at home and abroad. Yet Riot disappoints because it remains restricted to the level of an essay. Emotion and character make brief, very rare intrusions. The gut is never wrenched. The hormones never stimulated. Tears don’t spring to the eyes. Instead, there are a series of extremely erudite explanatory notes on India ranging from district administration, pluralist shrines, the rise of Hindutva, economic reforms and the caste and class dichotomy. The prose has the brahminical accuracy of social science. Not the seductive intimacy of fiction.

The fulcrum of Riot is the death of Priscilla Hart, wasp princess and Christian idealist who worked in an NGO in Zalilgarh. Before she dies, she falls in love with the DM of Zalilgarh, V. Lakshman. In describing his love for Priscilla, Lakshman writes in his journal: “This is not love as my parents spoke of it, an emotion anchored in family, in a sense of one’s place in the world, in bonds of blood so thick one cannot conceive of snapping them. It is instead love as I have read of in Western books or seen in Western movies, an individual attraction between a man and a woman, a feeling that is independent of social context or familial connection.”

Charming and masterful as this treatise on Eastern love versus Western love is, it seems a little too analytical for a man supposedly in the throes of extra-marital passion. Tharoor the historian and social observer is eager to explain his ideas on differing cultural conceptions of love. But as a result the characters who are used to express these ideas are imbued with near impossible self-awareness. Tharoor tells more than he shows.

E.M. Forster meets Hindutva in Riot. Although Priscilla is murdered amidst riots between Hindus and Muslims, the exact circumstances of her death are enigmatic. Like Adela Quested in A Passage to India, a white woman meets a puzzling fate in the land of hot-eyed mysterious natives. We may forgive Forster his fears, but why is Tharoor so fearful of his country? The burden of normalcy rests almost entirely with the American characters; they are middle-class individuals with emotional histories. Yet the Indian characters, by contrast, are not dignified with a similar degree of normalcy. Their histories are richly cultural rather than ordinarily emotional.

The narrative device of pages from journals of the protagonists makes Riot readable. Yet perhaps because of this device, the journals begin to sound like descriptions of social categories rather than the utterances of human beings.

Take the voice of Hindutva ideologue Ram Charan Gupta: “But these Muslims are evil people.... You have to understand their mentality. They are more loyal to a foreign religion, Islam than to India. They are all converts from the Hindu faith of their ancestors but they refuse to acknowledge this by pretending instead that they are descended from the conquerors from Arabia or Persia or Samarkand. Fine—if that is so, let them go back to those places! Why do they stay here if they will not assimilate into our country? They stay together, work together, pray together. It is what you Americans, I know, call ghetto mentality.”

This sounds too much like imagined Hinduspeak, too deliberate to compare smoothly with voices of Western isolationism. It’s a prescription of how a Hindu ideologue should talk, it is a cliche, comparable to Bertie Wooster-speak for an average Englishman. Perhaps such accounts provide the American reader with a ready reckoner of the Hindu Right. But to an Indian reader it seems like a bit of a journalistic short-cut rather than a nuanced description of a character worthy of participating in a novel.

Tharoor is one of India’s best-loved essayists and Riot shouldn’t really be called a novel. Like the work of the sharply ironic 19th century British writer John Galt, it should be called a ‘theoretical history’.