When Fear Didn't Enter The Booth 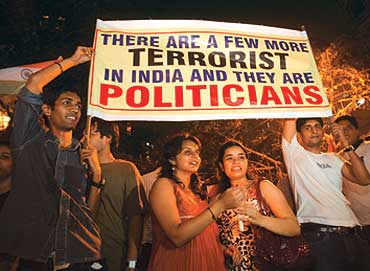 "I don't think you can fool people for long. Many terror attacks took place under the BJP-NDA watch. And Advani hardly looks decisive."

"The BJP are fools if they think there's something called a terror card that can be produced during polls like a magic trick."

"Mumbai 26/11 did impact the Delhi electorate...but they voted on local choices. It helped Cong that Sheila Dikshit was seen as acceptable."

"BJP has been screaming itself hoarse about terror for a long time. Terror is an abiding theme in BJP campaigns and will remain so."

"A certain dynamism in India now makes it impossible to manipulate voters. No one wants politics to be played with an issue like terrorism."

"We cannot conclude that terrorism is not an issue. But somehow it could not be highlighted properly by the BJP in two states."

The BJP has clearly bungled on terrorism. Long used to chest-thumping and claiming that it feels "more strongly" about terrorism than other parties, the BJP, however, ended up losing two states that voted in a fortnight dominated by the Mumbai terror strike. And as if to underline that miscalculation, the two BJP chief ministers who won—Shivraj Chauhan in Madhya Pradesh and Raman Singh in Chhattisgarh—happened to have done so on the strength of their quiet performances, and not for seeking vengeance against terrorists in particular and Muslims in general.

Why, then, did the BJP fail in tapping familiar prejudices in Delhi and Rajasthan? Why did its attempts to stir the old mix of 'Muslim equals terrorist equals Pakistani' prove counterproductive and in fact help the Congress in Delhi? First, there's a distinction between homegrown and international terror, which the voter could clearly see. Second, many of the victims were Muslims. The non-stop TV coverage of the Mumbai attack drove home both these facts.

What's more—and this is something all politicians are learning—the electorate is no longer fooled by sham posturing, especially on issues as important as terror. The BJP's own record in fighting terror has been unimpressive, so its theatrics seem even less credible. Historian Ramachandra Guha says, "I don't think you can fool people for so long. So many terror attacks took place under BJP-NDA watch. Then, L.K. Advani, at around 80 years of age, has done many flip-flops and hardly looks a decisive leader, while Narendra Modi's offer of money to slain ATS officer Hemant Karkare's widow was in bad taste."

The BJP, of course, is not alone in trying to exploit terrorism for political gain. After Indira Gandhi's assassination in 1984, the Congress campaign had been seen to have an anti-Sikh subtext. And kneejerk responses to acts of terror follow a familiar pattern worldwide: after a major terror attack, one or the other political party or leader indulges in fear-mongering, expecting to gain from public insecurity. In India, there's little doubt that shrill government announcements of measures to "fight back" terror are overwhelmingly influenced by political concerns. Those in power must strive to look tough, and perhaps that seems to them even more important than calmly coming up with serious counter-terror measures. In other words, enormities like Mumbai 26/11 do provoke political grandstanding.

But sociologist Dipankar Gupta argues that the terror card works only when there is the threat of secession. "(Terror) has been flogged far too often and mostly it hasn't worked at all. The BJP are fools if they think there's a terror card that can be produced at election time like a magic trick and made to work," he says. And what about phenomena like Narendra Modi? "He's a different story—a leader who combines personality with regional pride," says Gupta. That is to say, charismatic leaders can make all sorts of issues work for them.

In contrast, the BJP's projected leader in Delhi, V.K. Malhotra, was an unmitigated disaster who, after the Mumbai attack, added to the public's revulsion for politicians by declaring that if he came to power, he would hang Afzal Guru within a week. This crude reaction from an aging leader—who did not inspire confidence in the first place—put people off. Instead of a dignified response, a few BJP leaders appeared to be salivating at the possibilities. The party's campaign sank like a stone.

In Rajasthan there was a last-minute attempt to capitalise on 26/11. But the anti-Vasundhararaje mood had already gathered steam and local factors dominated in the overwhelmingly rural state, where it was too much to expect the Mumbai card to yield any dividend. Also, the terrorist attack in Jaipur, earlier this year, had seen the state intelligence being partly blamed. So the efforts to raise the terror issue failed.

There is a fascinating insight from psephologist G.V.L. Narasimha Rao, who has conducted in-house surveys for the BJP. He says that in August this year, the BJP would have got a two-thirds majority in Delhi. But that turned 180 degrees after Malhotra's name was announced. The leadership was informed that it would have been better not to project any one leader. Now, Rao says, "I will say that the Mumbai terror attack did impact the Delhi electorate. The middle class was motivated to vote but they voted for local choices. It helped the Congress, for Sheila Dikshit looked like a much better face." He says the rural voter, in any case, votes on local and caste considerations. "It is only among urban voters that the terror card can work. But people should not assume this will automatically help only the BJP."

One BJP insider jokes that "people were protesting against terrorism, but they were even more scared of Malhotra becoming their chief minister". Sushil Pandit, who has handled many successful advertising campaigns for the BJP during elections, defends a blood-spattered ad released by the BJP in Delhi the day after the Mumbai attack. It was called distasteful, but Pandit says, "People seem to be reacting to this ad as if we rubbed our hands in glee after Mumbai and started to talk about terrorism. The fact, however, is that the BJP has been screaming itself hoarse about terrorism for quite a while. Terror is an abiding theme in BJP campaigns and will remain so."

Says senior BJP leader Dr Murli Manohar Joshi, "We cannot conclude that terrorism is not an issue. But somehow it could not be highlighted properly because of the deficiencies in the BJP's election management in the two states." But some rethinking has begun. The larger question confronting the party is whether it should downplay ideological issues and project itself on solely on governance. Today, Narendra Modi is arguably the only BJP leader who combines the development plank with a tough-on-terror image.

The other successful model emerging in the BJP is that of Raman Singh of Chhattisgarh, who won himself a second term without raising ideological issues or uttering the words 'Hindu', 'Muslim' or 'Christian'. He did crack down on Maoists, but also spoke of development programmes and the hugely popular Rs 3-per-kilo rice scheme. Even Shivraj Chauhan, who won with a huge margin in Madhya Pradesh, emphasised development and performance.

Columnist and author Gurcharan Das says that India has now attained what he calls a "certain dynamism" that makes it impossible for politicians to blatantly manipulate voters. "No one now wants politics to be played with an issue like terrorism. Indian Muslims were outraged too and they protested in their own way. They had a sense of India and (knew) the country was there to support them."

Could this have been a benchmark election, in which politicians were taught a lesson? The voter has certainly told the politician that fear-mongering will not work. Even positions that play on prejudices and identity politics have to be projected with caution and intelligence. At least one thing can be said with surety: it will be very difficult now to crudely exploit an act of global terror for political purposes.

Toss Out That Cookie-Cutter