Despite lingering doubts about the Saudi's close links with Pakistan and Kashmir Jaswant's visit heralds a new, pragmatic engagement 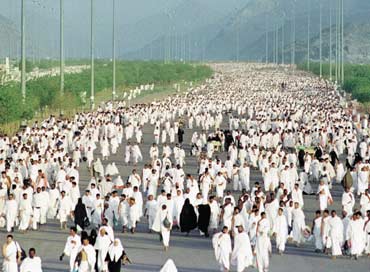 outlookindia.com
-0001-11-30T00:00:00+05:53
It's absurd but true. Foreign minister Jaswant Singh's recent trip to Saudi Arabia was technically a 20-year overdue return visit. Years ago, Saudi foreign minister Prince Saud Al Faisal had come to India, and only now has India reciprocated. More astonishingly, this is the first time an Indian foreign minister is venturing to Saudi Arabia. Obviously, it isn't as if India has suddenly discovered the desert kingdom, but it seems the realisation that the potential of the relationship has hardly been exploited is now dawning on Delhi.

Considering the mutual connections, the Rip Van Winkle-like approach to Saudi Arabia is all the more bewildering. The latter is India's biggest supplier of oil (over 25 per cent of India's crude imports), the number one destination for the Indian workforce abroad (about 1.5 million Indians remit US $4 billion annually), the biggest pilgrimage centre outside India (100,000 Indians perform Haj every year, and another

50-75,000 the umrah—a visit to Mecca when the Haj isn't on). It is also India's principal trading partner in the Gulf, accounting for nearly 30 per cent of the total trade with the gcc (Gulf Cooperation Council).

Mutual neglect is an explanation at once comprehensive and euphemistic. Perhaps one plausible reason for this is the popular perception that the Saudis are too closely aligned with Pakistan—often manifest in the stance Riyadh takes at various Islamic meets—for Delhi to expend time and energy in nurturing the relationship. The best news, therefore, about Singh's trip is that it has happened at last. It was scheduled earlier in October last, but the Saudis cited the Palestinian-Israeli crisis to cancel it at the eleventh hour. The trip was a result of a sober reappraisal: Riyadh allowed more work permits for Indians and New Delhi replaced Baghdad with Riyadh as the main crude supplier. Over the last five years, Saudi Arabia has become increasingly aware of India as an energy market as well as an information technology source.

Before that, the relationship was rather desultory—now off-now on. In fact, diplomats say it was more off than on. For instance, the file notings after Mrs Gandhi (who visited the kingdom in 1982) met King Fahd in Cancun, Mexico, in 1983, show that it was a fundamentally useful meeting, providing sufficient scope to propel the relationship further. But apart from the notings, there were no significant follow-ups. It was as though Indian foreign policy on Saudi Arabia was limited to those in the diplomatic loop hoping for the Haj season to pass off without incidents. Occasionally, there would be stories about Saudi Arabia's exceptional chumminess with Pakistan (Gen Musharraf has visited Riyadh twice in the last 12 months) and its evangelical dalliance with fundamentalist causes in Afghanistan, Kashmir and Chechnya. These implied that you only had to scratch the surface of the international fundamentalist scenario to discover Saudi oil money.

One such memorable instance was as recent as October 1999 when J&K CM Farooq Abdullah told the state assembly that it was Saudi Arabia that was financing most of the fundamentalist Jamaat-e-Islami schools in the Valley "for the past several years". (The joke in the Valley is that these are the only schools that function.) Also, the US state department's '96 report on 'Patterns of Global Terrorism' for the first time said that the Harkat-ul-Ansar raised funds in Saudi Arabia; its last year's report reiterates the charge.

No doubt, Saudi funding of pan-Islamic organisations is a factor in Delhi's appraisal of the kingdom, as also the activities of the Kashmir Committee of wamy (World Assembly of Muslim Youth), which often conducts conferences, seminars and exhibitions on the subject in Riyadh. Saudi Arabia's presence in the Organisation of Islamic Conference's contact group on Kashmir is also cited as a factor (the oic headquarters are in Saudi Arabia). The fact that Riyadh embraced the Taliban regime in indecent haste isn't easy to overlook either. Yet it is mainly third-country issues that have complicated India's relations with the Saudis, starting with Jawaharlal Nehru's excessive identification with Egypt's Nasser and by implication Yemen, with which Saudi Arabia still has to resolve its border problems; then the truncation of Pakistan in 1971, and later Afghanistan.

But Riyadh's new Afghanistan policy is illustrative of change. The blow-back from the Afghanistan experiment began to be felt in the Gulf after Afghan veterans returned to their places of origin, be it Algeria or Saudi Arabia. The House of Saud was particularly concerned after Osama bin Laden, a part creation of Saudi Arabia itself, turned against the monarchy, effectively mitigating the Saudi role in Afghanistan. Riyadh wanted Osama captured and extradited. Taliban chief Mullah Omar refused, leading to an estrangement with the chief of Saudi intelligence, Prince Turki al Faisal, a nephew of the king and brother of the foreign minister. In September '98, Riyadh recalled its charge d'affaires in Kabul, ejected the Taliban representative out of Riyadh and "froze" ties with the Taliban. Official funding promptly dried up, but the question of private funding remains—and is a major area of concern for India and the world.

In 1993, Algeria, Tunisia and Egypt approached Saudi Arabia and made a frank presentation of the repercussions of funding Islamic radicals. Arab interior ministers then formed a group on terrorism and put in place an arrangement that made it possible to track large-scale remittances abroad. It's quite another matter whet-her or not these arrangements meet Indian concerns. Says a former diplomat, "We've had quiet exchanges with the Saudis on Afghanistan for several years now." The change in Saudi policy became clear to South Block in October 1997 after crown prince Abdullah went on a tour that included the US, Japan and China. Pakistan was added as an afterthought when it was discovered that there were no Islamic countries on the itinerary. The prince was given a rousing public reception in the Shalimar Gardens in Lahore, an honour previously extended only to Muammar Gadaffi of Libya. In his speech, however, the prince bluntly told Pakistan that Riyadh looked forward to a peaceful and negotiated settlement of Kashmir. This was repeated on Pakistan's soil on two other instances in '99 by visiting Saudi royalty.

The Saudi position on Kashmir is considered ticklish. For, Riyadh emphasises that a solution must be in accordance with the UN resolutions providing for self-determination. This stance surfaces every year when the General Assembly meets or when the oic convenes. But diplomats say this is more a case of lip service than robust activism. They also point out that soon after Pokhran II, Saudi Arabia allowed a scheduled ceremonial Indian naval port call go through at Jubail without cancelling it. And after the Chagai blasts, it called on both India and Pakistan to solve their differences through dialogue.

Diplomats also say that during Kargil, it was through the Saudis that the Americans "put across certain things in no uncertain terms to Islamabad." They say it was the Saudis who were instrumental in "persuading Nawaz Sharif to go to Washington". That this resulted in the July 4 declaration (signed between the US and Pakistan in Washington) and Pakistani troops pulling out of Kargil only underscores the influence Riyadh wields in the region. Prince Bandar bin Sultan, son of the defence minister and the Saudi envoy to Washington, even provided his private aircraft to Sharif to fly from Washington to London, where the Pakistani aircraft was waiting. Indeed, Sharif's subsequent safe passage to Saudi Arabia is a logical last chapter to Kargil.

As Jaswant signed the two overdue agreements—one on foreign office consultations that'll enable mutual exchanges, the other on combating drug trafficking (the latter dating back to '94-'95)—India and Saudi Arabia were re-engaging afresh, belatedly but pragmatically.

A Pardon in Proxy