What's With October And The Revolution?

Till Oct 8: should Mush resign earlier, his own juniors will be a threat 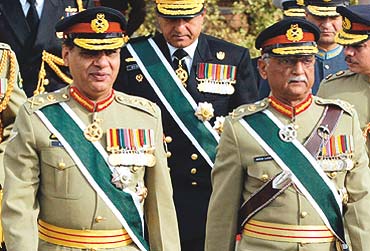 Snapping at Musharraf's heels are vice-chief of army staff Gen Ahsan Saleem Hayat and chairman, joint chiefs of general staff, Gen Ehsanul Haq. The duo was catapulted to their posts on October 1, 2004, over other seniors in an army reshuffle by Musharraf. Hayat and Haq are the last two serving generals of the cabal which assisted Musharraf in ousting Nawaz Sharif. Ordinarily, a ruler shouldn't fear those whom he's favoured. Perhaps Musharraf's paranoia stems from his own betrayal of Sharif, who'd handpicked him to command the army.

Obviously, the threat from Hayat and Haq is real as long as they are in service—both retire on October 8, 2007. Should Musharraf, under pressure, relinquish his uniform now and retain only the post of president, there's no guarantee that Hayat and Haq would do their benefactor's bidding. A highly disciplined army, Pakistani soldiers swear allegiance to the top commander, not to his deputies or superannuated generals. Indeed, coups in Pakistan have involved the entire army as an entity and are not staged, as in banana republics, by a colonel.