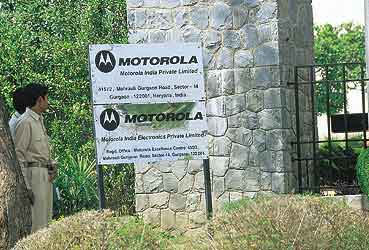 outlookindia.com
-0001-11-30T00:00:00+0553
How did US multinational telecom giant Motorola, claiming to be a "global corporate citizen dedicated to ethical business practices", manage to bag tenders worth Rs 900 crore for supplying telecom equipment from Bharat Sanchar Nigam Limited (BSNL)? By paying huge bribes to BSNL officials as grease money through middlemen and front organisations, according to what the CBI has found out. In an FIR the bureau filed in September 2003, it cited evidence of Motorola's payoffs being funnelled by middlemen and listed the mnc among its accused. The case, in cold storage for close to six months, has now been revived.

Under the CBI scanner are certain Swiss bank accounts where one Delhi-based middleman promoting Motorola's interests has parked his money. Says CBI additional director Vijay Shankar Tiwari: "The investigations are on and may take some time. All I can say now is that we are going through the appropriate channels, and Interpol has been contacted." As to why the case has dragged on for so long, CBI joint director A.K. Suri says, "Sometimes cases get stuck, and then they move on."

The Motorola case figures in the FIR (RC No. DAI-2003-A-0054) the CBI filed following a joint raid by the investigating agency and Income Tax officials on an official of United Telecom Ltd, a distributor for Motorola, and seized Rs 50 lakh from him. This sum was to be the bribe paid to BSNL and MTNL officials on behalf of Motorola via middleman Rajiv Gupta. To quote the FIR, "The money was to be delivered to Rajiv Gupta, who acts as a conduit on behalf of several private telecom companies such as M/s Motorola...to be used as illegal gratification to influence public servants of MTNL/BSNL in connection with Motorola's current bids for supply of equipment to be purchased by MTNL/BSNL." The key contract Motorola was interested in pertained to providing CDMA technology on which wll phones run. The contract in question was for the southern circle.

Gupta, a middleman who runs the Nirvan Management Group, is now the focus of the investigation. Fresh leads with the CBI, now the subject of another round of investigation, suggest that Nirvan, through its front company Brent Cross Corporation (registered in the British Virgin Islands), had routed money to a Swiss bank account in Geneva. Armed with this fresh information, CBI officials are now trying to determine how much money has been stashed in the account. They suspect Motorola and other companies paid kickbacks in this account.

Realising that Gupta is under investigation, the Swiss authorities have frozen the Brent Cross account. Oliver Vergeres, the Swiss assistant federal prosecutor handling the case, refused to divulge details about the freezing of this particular account and the amount it held. Speaking to Outlook from Lusanne, he said, "I cannot discuss details like this, as it is sensitive." However, information made available to Outlook from Switzerland suggests that nearly $3 million (Rs 13-14 crore) is parked in this account.

Following the account freeze, the CBI probe will centre around:

What the CBI investigations establish clearly is that Motorola officials used Gupta to get their work done because of his proximity to BSNL and MTNL officials. The FIR says in no uncertain terms: "It is also learnt that recently a payment of Rs 7.18 crore has been cleared by MTNL to M/s Motorola India Ltd supposedly by providing illegal gratification to officials of MTNL through Rajiv Gupta."

Another giveaway is an unusual request from the BSNL's protocol department found in Gupta's office. The letter from the PSU asks his secretary for tickets and arrangement for 10-12 BSNL officials—including its then chairman and managing director, Prithpal Singh (who retired on December 31, 2003)—for their proposed visit to Geneva for the International Telecom Union (ITU) exhibition in October last year.

On his part, Gupta, when contacted by Outlook, refused to provide details of Brent Cross and his involvement. "All this cannot be talked about now." He denied that he indulged in any wrong-doing and said he was being "framed". Repeated efforts to contact Motorola officials by Outlook proved futile.

Strangely, the CBI is tightlipped on the decoding of the computer floppies it has seized following the raids on Nirvan's premises in Delhi. One such e-mail sent by Tarvinder Singh of Motorola India Ltd requested Gupta to use "his personal influence with the CMD, MTNL, so that the technical aspects of the Motorola bid are taken care by the CDMA Technical Evaluation Committee of MTNL".

CBI officials characterise the entire case as one of how big telecom companies, through active influence-peddling, "managed to adjust their terms and prices of telecom equipment" even before announcements were made public by both BSNL and MTNL. "Some big players are involved and the case is very complex. But we are on it," says a CBI official. Going by the record of previous such investigations, it might serve the cause to have fingers crossed.