What's On The Buffett 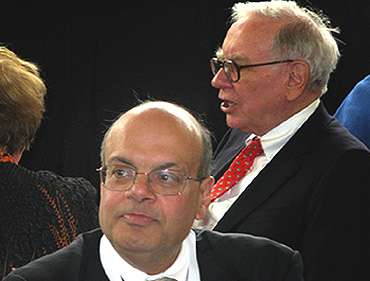 Warren Buffett certainly knows a thing or two about making the right investments. In 1986, when India-born Ajit Jain gave up his job as a consultant at McKinsey for new challenges at Berkshire Hathaway, Buffett was quick to recognise the worth of his new colleague. In his letter to shareholders at the investment holding company last month, Buffett wrote: "Very quickly, I realised that we had acquired an extraordinary talent. So I did the logical thing: I wrote to his parents in New Delhi and asked if they had another one like him at home. Of course, I knew the answer before writing. There isn't anyone like Ajit."

Berkshire Hathaway's third major insurance operation is Jain's reinsurance division headquartered in Stamford, Connecticut, and staffed by 31 employees. "This may be one of the most remarkable businesses in the world, hard to characterise, but easy to admire," Buffett said. "From year to year, Ajit's business is never the same. It features very large transactions, incredible speed of execution and a willingness to quote on policies that leave others scratching their heads. When there is a huge and unusual risk to be insured, Ajit is almost certain to be called."

Such lavish praise from the man Forbes magazine branded the richest in the world in 2008 has once again set tongues wagging: Does the 79-year-old 'Oracle of Omaha' intend to appoint Jain as his successor?

To some, Buffett appeared to signal as much when he went on to add "a final post-script on BHAC (Berkshire Hathaway Assurance Co)". "Who, you may wonder, runs this operation? While I help set policy, all of the heavy lifting is done by Ajit and his crew. Sure, they were already generating $24 billion of float along with hundreds of millions of underwriting profit annually. But how busy can that keep a 31-person group? Charlie (Charles Munger, vice chairman, Berkshire Hathaway Corporation) and I decided it was high time for them to start doing a full day's work," he wrote.

Speculation that Jain will fill Buffett's shoes has been gaining steam for a few years now. In 2006, the International Herald Tribune carried a story with the headline: 'Ajit Jain has Buffett's ear—and may have his job when he's gone'. Indeed, Jain is among a handful of candidates seen most likely to succeed Buffett. Other potentials often cited are Richard Santulli, who runs NetJets, an operator of private jets; David Sokol, chief executive of Berkshire's MidAmerican Energy Holdings; and Tony Nicely, chief executive of the company's GEICO car insurance unit.

Jain's assistant Beverly Ward told Outlook that he was travelling and unavailable for an interview. But given his past responses to similar media requests, the self-effacing Jain would have likely declined to comment had he been available. "Mr Jain doesn't usually do interviews," Ward explained. In 2006, while declining to comment on similar succession speculation, he had told the IHT in an e-mail message that showcased his self-deprecating humour: "It is undoubtedly the case that any disappointment I have caused you by declining the interview is far less than the disappointment I would have caused you by granting it."

Author Robert P. Miles has a stack of books on Buffett to his credit. In one of these—The Warren Buffett CEO: Secrets from the Berkshire Hathaway Managers—Miles describes Jain as the "accidental manager". Born in India in 1951, Jain earned his engineering degree at IIT, Kharagpur. "Even though I enjoyed being an engineer and looked forward to engineering as a profession, I very quickly realised that engineers—certainly in India, but also here in the United States—end up being shortchanged. I was working six days a week and making a quarter of what people in sales and marketing were getting paid. So I figured that if I couldn't beat them, I'd join them," Jain told Miles.

At the urging of one of his supervisors in India, Jain went on to study at the Harvard Business School. After getting his MBA in 1978, he joined McKinsey and Co as a management consultant. Fed up with his job, Jain quit in 1981 and returned to India. Following an arranged marriage, it was Jain's wife, Tinku, who pushed him to return to America, where his former employer McKinsey promptly snapped him up.

In 1986, at the urging of his former boss, Michael Goldberg, Jain joined Berkshire Hathaway. The rest, as they say, is history. Jain is second only to Buffett in his revenue-generating abilities at the company. In the spring of 2001, Buffett wrote in his annual 'Chairman's Letter to Shareholders': "It is impossible to overstate how valuable Ajit is to Berkshire. Don't worry about my health; worry about his." Miles notes that Jain is known for "closing the largest sale in reinsurance history, but no deal is too small for him. He will still get in his car to capture a $1 million insurance agreement".

He describes Jain's small office as cluttered full of papers and documents at the time of their meeting. "Ajit is very frugal—maybe even more so than Buffett. At the time of our interview, he hadn't replaced his secretary in three months, and was retrieving his own e-mail and booking his own travel reservations." In an interview with Outlook, Miles described Jain as a regular guy. "Ajit is a kind man, someone who you would enjoy having a cup of coffee or tea with," he said. "He is obviously a brilliant man, having graduated from IIT, but not all intelligent men are friendly like Mr Jain."

Industry insiders describe the relationship between Buffett and Jain as extremely close. Miles says the two talk on the telephone every day, usually in the afternoon. "They talk about the insurance risks being considered and the appropriate premiums to charge. Many of the deals Mr Jain does are one-off or one of a kind insurance policies that only Berkshire Hathaway has an appetite for. Deals like insuring the Salt Lake City Winter Olympics, or Pepsi $1 Billion Dollar Chimpanzee Challenge or (baseball star) Alex Rodriguez's $250-million disability insurance contract," he says. "Do first-class business in a first-class way. Work hard. Be smart. Manage little," is how Miles describes the common ground between the two.

Jain is not easily distracted by chatter about succession plans at Berkshire Hathaway. But Buffett's frequent praise for Jain only helps fuel the speculation. When asked outright at a press conference whether he intended to appoint Jain as his successor, Buffett quipped: "I still do talk to him every day.... That's how I get smarter."