The love of food brims over, conquers the blogosphere 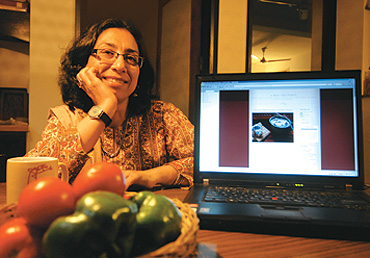 outlookindia.com
-0001-11-30T00:00:00+0553
No One Cares What You Had for Lunch , insists the title of an American book dispensing droll advice to wannabe blog superstars. But if Indian blog enthusiasts are to be believed, this is advice you should ignore. People are, in fact, scrambling to find out exactly what you had for lunch, eager to demand recipes if it was toothsome, and ready with commiseration if it left you cold. Food bloggers are a fast growing tribe in India, with enthusiasts ranging from busy young urban professionals to homebound housewives and tech-savvy retired folk; from seasoned chefs to bumbling first-timers. "I have plenty of friends who are hopelessly addicted to food blogs!" says celebrated chef Ritu Dalmia. Debashish Chakrabarty, founder of the blog award site Indibloggies, confirms that food blogs are the rage today. 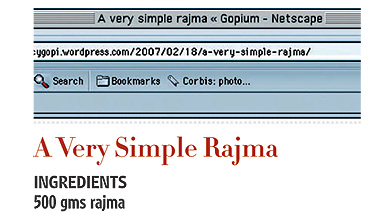 While recipe sites have been around for a while, only a greenhorn could confound those with food blogs. A food blog entices with rapturous descriptions of the cooking and eating experience, and is as much a literary enterprise as it is a culinary one; while the recipe site provides a more mundane inventory of ingredients and instructions. Enthusiastic food blog writer Anita Tikoo confesses to spending a minimum of ten hours writing each blog post, regardless of whether her subject is the simple pakoda or the more elaborate Kashmiri kofta. Her blog, A Mad Tea Party, records an average of a 1,000 hits a day and allows Anita, a Delhi-based landscape architect, to share her love for food with audiences from Bahrain to Bolivia, while adroitly circumventing pesky editors. Sometimes, readers of her blog end up becoming real friends—recently, one of them flew all the way from Chennai to Delhi just to meet her.

C.Y. Gopinath, a seasoned journalist who writes the often riotously funny food blog Gopium, avers, "Writing a food blog is like having someone over for a meal—it's a very personal experience". Gopinath keeps his fans hooked, pondering such momentous questions as "Chhole ke peechhe kya hai?", and proffers sagacious advice like "Don't curry, be happy".

Food blogging is the latest manifestation of what Rude Food author Vir Sanghvi calls India's 'food explosion'. "The opening up of imports and growth of the domestic food industry have meant many unusual ingredients are now available in our shops. Satellite television has increased our knowledge of and interest in food," he observes. "Twenty years ago," he adds, "it was easy to find servants who would do the cooking even in middle-class homes. Now, more and more people are cooking for themselves." And turning to food blogs to add variety and spice to their daily bread.

The food blogging phenomenon in India has largely been inspired by nostalgic nris who were the first to use the internet to bring together a population craving ghar ka khana. Mahanandi, an NRI food blog started in 2005, enjoys something of a cult status, having inducted many into delighted exchanges about grocery stores in Middle America that stock curry leaf saplings, or serendipitous discoveries like the one that found Aunt Jemima's Pancake Mix provides a brilliant shortcut to making gulab jamuns. Cyberspace now bursts with food blogs written by Indians studying or working in America, like Mane Adige (Home Food in Kannada), and Indian Food Rocks !, which attempt to recreate the aromas of mothers' kitchens back home.

The range of recipes on Indian food blogs is staggering—regional specialities, yoga-bhakti food, even food to combat incontinence or rheumatism. "Over the years," observes media commentator Santosh Desai, "there has been a growing interest in specific forms of Indian diet. The comfort with being Indian has increased as against an earlier era, and cultural distances are reducing within the country. " Roli Books cookery editor Nita Dutta notices this pattern as well, and adds there's growing interest in the cultural context of food: "People no longer want just a recipe—they want an insight into its story and history". This is an aspect that food blogs emphasise. Food blogs are also becoming a platform for food crusaders. Jyotsna Shahane, author of thecookscottage blog, for example, is an indigenous-foods advocate with a mission to popularise less-than-fashionable foods like jaggery and jamun.

Needless to say, food bloggers often find themselves in the middle of raging online debates about origins and authenticity. Sanghvi is frequently caught in such wrangles. "Some of my readers dispute my claim that tandoori chicken was not invented in the North-West Frontier," he reveals. Mandira Banerjee, who writes the food blog Ahaar, discloses that she came under fire for corrupting the Bengali shukto by adding chillies to the preparation. So appalled was one reader that she was driven to write a poem about this sacrilege! 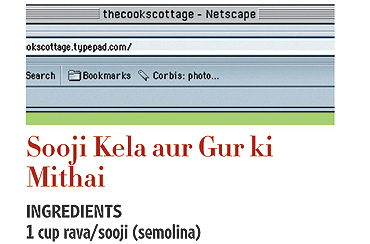 So will food blogs ever edge out the dependable cookbook? Prolific cookbook mogul Nita Mehta doesn't think so. "Blogs are mere entertainment...you read them and forget," she declares. 'Jai and Bee' argue otherwise: "Food blog recipes are far more reliable than the ones in cookbooks. Readers try them and post frank feedback on the blog. Who knows whether cookbook recipes have been tested?"

Many blog-watchers believe a symbiosis between the publishing industry and blogosphere is imminent, and the future of food writing lies in the 'blook'. Pune-based techie Vikram Karve started his writing journey with a blog on 'Chilli ice-cream at Chowpatty', and eventually snagged a 'blook' deal with Sulekha.com. Meena Agarwal, the Canadian-Indian behind the blog hookedonheat, began by teaching bloggers how not to cook Indian food, and has now been commissioned to write a cookbook. "My blog helped turn my passion into a career choice!" she chirps.

Other food-bloggers say it's time you moved your laptop into the kitchen, and threw out that old cookbook collection. We suggest you stall this decision until you've tried out three popular food blog recipes we've selected for you...