What The Break-Up Means

The split's happened; both the Ambani brothers are on their own now. A look at their future prospects. Updates 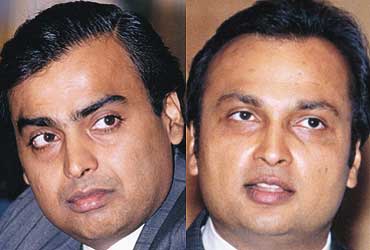 When it finally did, it came as a bolt from the blue. There were speculations that it would be announced on July 6, 2005, Dhirubhai Ambani's death anniversary. Or, in front of thousands of shareholders when the group's flagship, Reliance Industries Ltd (RIL), held its annual general meeting in mid- or end-July. But the truce between the two warring Ambani brothers, Mukesh and Anil, came over a weekend—June 18, 2005, a day with no particular significance. The agreement, too, didn't hold any surprises. Mukesh got RIL and IPCL, and Anil got the telecom venture, Reliance Energy and Reliance Capital (see graphic).

For those who had followed all the twists in the seven-month-old public battle between the two siblings, the division signified the end of a family brawl. For others, who were insightful enough, it indicated the beginning of fresh battles the two would have to fight in the near future. Not just against each other, but also against competitors and policymakers. Observers believed that it signified the beginning of a new era, where both the brothers had to grapple with critical issues that could prove to be turning points for their respective businesses.

There were nuances in the various clauses of the deal that could prove to be pressure points. In addition, the policymakers could be in a position to force the two Ambani factions—post their breakup—to change their business strategies. Finally, ego clashes and the personal hurt they experienced in the past few months could make them waste their energies on extracting revenge against each other. Rest assured, the last word on the Ambani war has not yet been written. It's a long way before the final epitaph is inscribed. To borrow from Robert Frost, the two brothers still have miles to go before they rest and relax.

"The epilogue to this messy episode is yet to happen. The recent events will impact the future destiny of both the brothers," says someone who has keenly watched the Reliance battle from close quarters. However, when Outlook spoke to the two respective camps—Mukesh and Anil's—there was a standard response. Both sides refused to talk about any details till the split process was over. In other words, the brothers would go public after the legal and other formalities related to the division were complete.

That could take a few months. But less than a week after they announced a deal to split the Rs 1,00,000 crore Reliance empire, it's easy to pinpoint the future obstacles for Mukesh and Anil. "For both, the going will be tough. The future will decide who's the tougher of the two, and who will indeed get going," says a corporate friend of the Ambani family. However, we can say one thing: each sibling will try to prove that he is the real inheritor to carry on the late father's legacy.

It won't be easy. A casual glance reveals that Mukesh is the clear winner in the division process. He has got two companies (RIL and IPCL) that represent over 80 per cent of the original group's revenues, a similar percentage of assets, and a slightly lower figure in terms of valuation (or market capitalisation for quoted firms). Despite this, he needs to be geared up to face his next business battle—from competitors such as Purnendu Chatterjee, who recently inked a $5.7 billion deal to gobble up Basell, the world's largest producer of polypropylene.

Days after his bid was accepted, the New York-based Bengali NRI made his intentions clear. "We are looking for dominance in the global petrochemicals market," he said, adding that the Basell acquisition will help his group—encompassing several countries—to increase the petrochemicals marketshare in Asia. Bad news for both RIL and IPCL, which together harbour dreams of being global petrochemicals players. Recently, RIL announced it was buying a plant in Australia. The race for regional supremacy between the two competitors had begun.

But then, there's a problem. A part of Mukesh's deal with Anil is that the former would have to pay a huge sum—some reports put the figure at Rs 4,500 crore—to his younger brother. If that's the case, it would restrict Mukesh's ability to use RIL's plentiful cashflows to invest in new ventures to take on competition, at least in the short run. In short, the deal between the two brothers might adversely affect impact RIL's future. 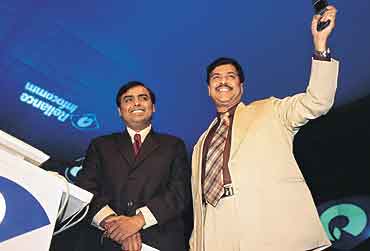 What could also affect RIL's ability to retain its sectoral clout is that Mukesh might end up spending his energy on slightly irrelevant matters. Over the past few months, Anil has dented Mukesh's credibility by raising issues of corporate governance in RIL, IPCL and Reliance Infocomm—the three firms that were controlled and managed by the elder brother. At the same time, Anil has hurt Mukesh's ego. So, there's a feeling that Mukesh will try to take his revenge at some point or the other.

One school of thought is that Mukesh might put pressure on Anil by entering the same sectors as the latter once the five-year non-compete clause between the two is over. Finally, the factors that could make or break Reliance Energy and Reliance Infocomm—the two firms that Anil has got—are in Mukesh's control. For example, RIL has committed to supply gas for Reliance Energy's proposed power project in UP. But what'll be the price at which it's supplied...that'll be decided by Mukesh. Despite the breakup, Mukesh can make Anil's life miserable. If he wants to.

Although Reliance Infocomm has gone to Anil, it could still be a Damocles' sword over Mukesh's head. Prior to the split, Mukesh ran Infocomm; therefore, he's also responsible for the telecom venture's acts of commission and omission. The company is still involved in a legal battle about the re-routing of international calls as local ones. In the recent past, there have been e-mails that have highlighted the role of Manoj Modi, a close Mukesh ally, in pushing through this scheme, despite knowledge that it violated the spirit, if not the letter, of the law.

Now, more e-mails have surfaced, although their veracity hasn't been established. Modi had written mails to Mukesh stating that, apart from "taking good care of the telecom regulator"—which was denied vehemently by Pradip Baijal, chairman, Telecom Regulatory Authority of India—he had convinced officials in Bharat Sanchar Nigam Ltd, the government-owned telecom firm, that the re-routing scheme was a valid one. Security agencies like the CBI and IB are now investigating this case.

If true, Mukesh could find himself in the hot seat. But so would Anil, who's got Infocomm as part of the split agreement. The younger brother will be stuck with Infocomm's legal imbroglio, the telecom firm's bloated accumulated losses and non-receivables (Rs 3,500 crore), and its dependence on Mukesh's RIL for existing guarantees. What's important is that Anil will need to invest huge amounts in Infocomm, as also in the other firms he's got as part of the deal.

"Anil is saddled with cash-guzzlers; all his firms require huge investments in the near future. Infocomm needs Rs 5,000-6,000 crore in the next year, Reliance Energy has to pump in promoters' equity for its Rs 11,000-crore power project in UP, and money has to be put in Reliance Capital to make it a financial superstore," says a Mumbai-based analyst. Anil has also announced a share buyback for Reliance Capital, which would suck up nearly Rs 2,000 crore. Thus, Anil won't be able to use the cash compensation that he gets in giving a purposeful direction to his empire, now renamed Anil Dhirubhai Ambani Enterprises.

Whichever way one looks at it, the Ambani split seems like a lose-lose situation for both brothers. Both Mukesh and Anil will need to use all the tricks in their bags to grow their respective empires. If they don't, their mother Kokilaben's belief that "my husband's foresight and vision and his values, combined with my blessings, will guide them (Mukesh and Anil) to scale new heights" could turn out to be mere wishful thinking.