'What Matters Is What Happens On A Friday'

Everybody has an opinion. If you start listening to everyone, it's easy to get lost. 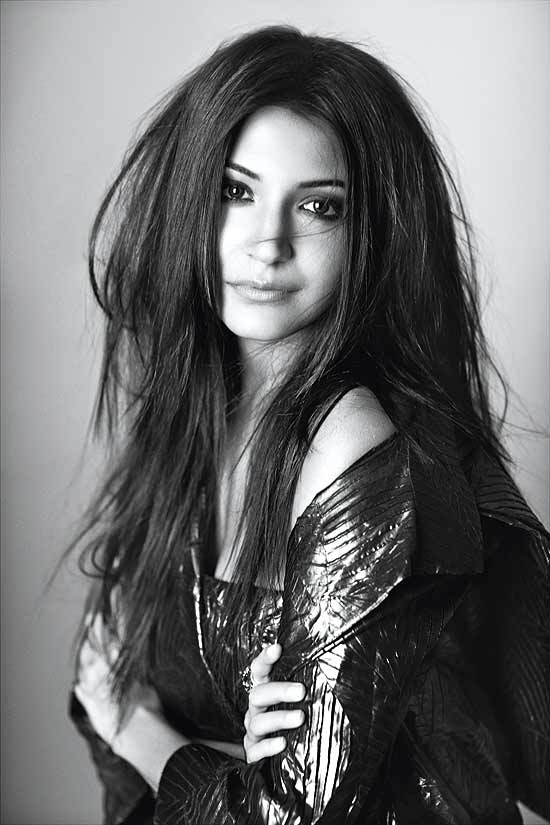 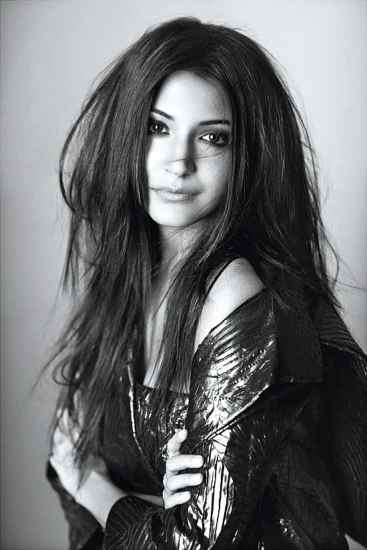 Why do we like Anushka Sharma? She refuses to be measured on the Bollywood scale of vanity, delusion or daddy’s sugar. Which is to say she is not statuesque, connected, desperate or surnamed Khan or Kapoor. So, we actually have no reason to like her. But we have seen her movies, failed to dislike them and then bemusedly commented to friends, “That Anushka Sharma is good, huh?”

That can be rated as high praise for anyone belonging to this generation of Indian youth that mulishly queue up, come hail or shine, for a shot at their 15 minutes of Splitsvilla or Roadies fame. What Anushka did though, is refused to be a prop to Shahrukh Khan in her 2008 debut film Rab Ne Bana Di Jodi; stood out in the unassuming 2010 hit Band Baaja Baaraat; implanted herself in the Yash Raj Films studio legacy by being one of the last actresses he directed in his life; and now bagged enviable roles in upcoming films by Vishal Bhardwaj, Anurag Kashyap and Rajkumar Hirani. The last bit of that statement can also be taken as a hint to her evolution as an actress.

But at 25, Anushka has already been in the show business for five years. This makes you wonder where she might find the experience that is a necessary ingredient for acting chops. She seems to wonder about this as well. “I’ve used up all my experience up till now in my work. If I don’t have perspective, or new experiences, how am I going to grow as an actress? I’m older and more mature. I’m becoming more responsible and learning new things at work. I learnt to ride a bike for Jab Tak Hai Jaan. But my life now revolves around going to a film set, meeting people and attending award functions. Then I go home and spend the remaining time with my family. That’s not enough,” she confesses. “For me to be able to portray reality on screen I have to be able to witness it. It’s thus important for me to just get away, take off,” she adds.

And that’s exactly what she did recently, she says. Flew to Spain with a friend on a backpacking trip, where they made plans as they went along, booking tickets only a day in advance. “I think it’s very important to be...I won’t say, normal, because I think I’m pretty normal...open to new things. Not get stuck in a mould or adhere to some sort of an image that’s expected of you as an actress. Not let your perspective on life get too narrow.”

Besides travel, learning to play the drums and speaking Spanish is also on her extracurricular agenda. But exploring spirituality further isn’t. 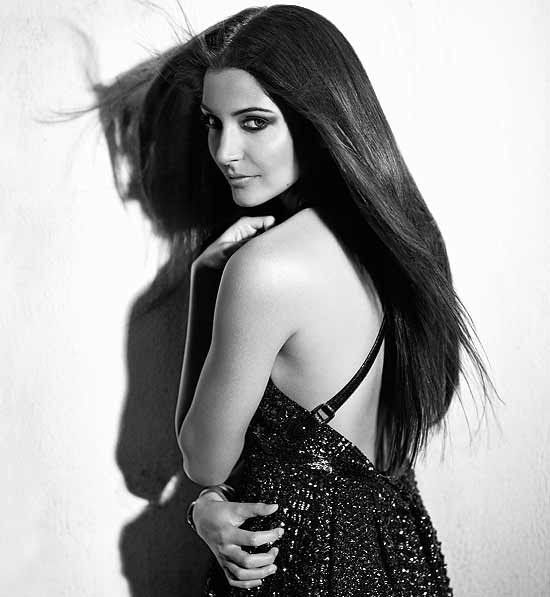 The last time Anushka had graced a Marie Claire cover was in January 2011, fresh off the success of Band Baaja Baaraat. She’d said then that she was interested in spirituality and that she tended to start her day off with a round of meditation. That was then. “I’m not into that anymore. I’m just trying to work without stepping on anyone’s toes, respecting people. For me that’s spirituality. I’m not very religious. I don’t know why but I don’t feel the need to meditate anymore,” she laughs.

While she continues to trip over her words, in her unselfconsciously hurried manner of talking, she adds, “I was very young when I entered the profession. I was a kid with a lot of nervous energy. That’s why I used to talk so much. I feel I’m much calmer now and more confident so I don’t talk incessantly to cover up my awkwardness anymore.”

For me to portray reality on screen, I have to be able to witnes s it. So it’s very important for me to just get away, take off...

Anushka was 19 when Aditya Chopra cast her in Rab Ne Bana Di Jodi opposite Shahrukh Khan. She admits that she perhaps got an easier launch than some star kids. While actors’ children might get more chances to prove themselves, Bollywood hopefuls like Anushka aren’t weighed down by the baggage of their parents’ acting legacies. “We’re underdogs. Nobody expects anything from us. That, I think, is a good thing.” Regarding her break into the industry, she says she did eventually ask Aditya why he picked her for the role. “He said he didn’t see any sign of desperation or manipulativeness in me. I take pride in that because it makes me feel like I’m achieving things the right way. I do feel I’m very strong-headed. You can’t make me do something if I’m not convinced about it. I think I have a fair amount of intelligence when it comes to my profession and I know what’s right or wrong for me. This is important because sometimes you can get pushed around so much. Everybody has an opinion: they tell you what you should or should not be doing, wearing, saying...If you start listening to everyone, it’s easy to get lost.”

Coming from an army family, minus any film industry connections, Anushka says she relies solely on her instinct when choosing projects. Sometimes she gets her older brother’s opinion on scripts that she likes, just to be sure. In Vishal Bharadwaj’s next Matru Ki Bijlee Ka Mandola, Anushka plays the role of Bijlee, and is a part of a cast that includes Imran Khan, Pankaj Kapur and Shabana Azmi. She admits she had to push herself more to do justice to this character. But she feels her own performance automatically got better in the company of these veteran actors. Next up are Anurag Kashyap’s Bombay Velvet and Rajkumar Hirani’s Peekay. Three filmmakers with three very different and distinct styles. “I’m at a very exciting place in my career right now. I’ll be presented in three very different ways,” she says. You can’t disagree.

On working with Yash Chopra in his last film Jab Tak Hai Jaan, she has this to say, “No actor can feel their career is complete without having done a film with Yash Chopra. His films were always ahead of their time. I feel a director’s energy always passes down to the last person on the set. And he was such an exuberant, childlike person, with a grand sense of humour. He also seemed younger than both his sons put together. That’s how cool he was.”

The rapport she seems to have with the Yash Raj family is apparent in how at home she seems walking around in their Andheri studio complex. She’s spent an hour working out in the studio gym and orders her favourites from the pantry menu. She’s also dressed in what seems to be her most favoured attire – joggers and a sleeveless T-shirt. “I like loose, baggy clothes. I cannot make myself spend money on designer labels. Maybe because I’ve been brought up in a middle-class background and I remember my mother comparing price tags of two saris before picking one,” she recalls. “I feel very guilty when I splurge too much. I’ve grown up wearing stuff from Delhi’s Sarojini Nagar market or export surplus stores. I don’t think I have to be shopping on Bond Street for people to think that I’m important. I’m a high-street shopper. It suits me, my body and my age. Maybe one day, when I’m older, it would be nice for me to carry a Louis Vuitton bag. Right now, I wouldn’t be caught dead with it.”

Maybe not when it comes to fashion, but ask how the fame and being a celebrity might have changed her, and you can almost sense the wheels in her head turning, weighing the truth of her answer, as she speaks. “I think people start changing around you and then they think that you’ve changed,” she says. “On the other hand, people who know me only from my films come to me with a certain preconceived notion about me. It’s very difficult to get past that. Most of the time they don’t even want to know more than what they think they know.”

There is a mix of challenge and cynicism in her gaze, as she cites the example of paparazzi or film reporters that may make up or exaggerate things. “You do get a little cynical in this industry because not everybody plays fair. But slowly, I realised everybody’s doing their job. I have to be practical about things. I’ve become less judgemental and very grateful for where I am. And that gratefulness is not just because I’m an actress, famous and rich, etc. It’s because I get to do what I like to do. And for that you can take all the backlashes, the controversies, and people passing quick judgements.

“You lap it up because you think, ‘it’s okay, it’s fine’, because I’m getting to do what I love to do. Tomorrow someone may write something about me or some actress may take a dig at me. I’ve realised in my time here that it isn’t going to do any good to them or any harm to me because, at the end of the day, none of it matters. What matters is what happens on a Friday. In the theatre.”