What Is A Good Muslim?

Two Muslims passed on July 30, made larger-than-life in death 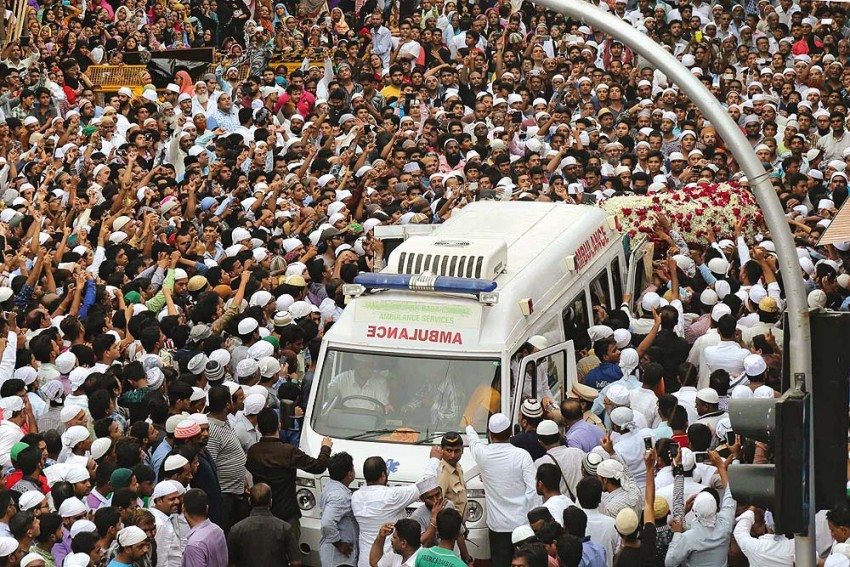 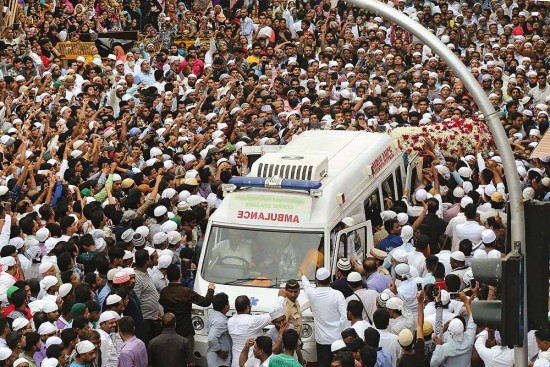 On July 30, two bodies were wrapped in the unstitched cloth in which Muslims go to their grave. One was hailed a national hero, his body draped in the national flag, the other was hanged in jail. As the morality play of good versus evil unfolded before our eyes, the two deaths seemed to bring about a sort of national catharsis, of different sorts, for different reasons. It must be the most curious coincidence that former president A.P.J. Abdul Kalam and Bombay blast convict Yakub Memon ended up being buried on the same day.

There’s no escaping the ‘Good Muslim, Bad Muslim’ stereotype in the world’s largest democracy with the third largest Muslim population in the world. The phrase, ‘Good Muslim, Bad Muslim’, was first used by former US president George W. Bush in the aftermath of 9/11 and picked up as the title of his masterly work by political scientist and anthropologist Mahmood Mamdani. His book, published in 2005, was titled Good Muslim Bad Muslim: America, the Cold War, and the Roots of Terror. One of the central points of the work is that the terms ‘good’ and ‘bad’ are not markers of religious purity or the lack thereof. They are a judgement of their utility to US foreign policy, based upon which images are constructed.

A Google search for Mamdani’s book goes straight to the Amazon books page where the suggested book to buy alongside is Edward Said’s Covering Islam: How the Media and the Experts See the Rest of the World. The title is self-explanatory and I have copies of both books at home. Hence I take the liberty to cannibalise the ideas and the Bush phraseology to understand what we have seen in India in the past week.

Why is Abdul Kalam—who incidentally also happens to be a Muslim—so valorised that he has become one of the most popular figures in recent Indian history? Whatever his achievements in the field of science (and there are some arguments about that), Kalam was propped up by the system and the political-military complex. He was devoted to a vision that sees India as a great military power, regardless of the multitudes of the very poor who live in it. He was very simply the “Missile Man” whose books sold more than any other author, whose lectures went housefull, who was adored by little children as he delivered easy-to-digest sermons about being good, having purpose, being motivated and so on.

He was also to my mind the Perfect Muslim, the one whom India has sought. Someone who did not wear his religion on his sleeve, came from a modest background, but educated himself to rise to the top. He was certainly far removed from the usual Muslim stereotype of the bearded trouble-maker who lives sullenly in the ghetto. Most significantly, Kalam never challenged the system nor highlighted injustice; instead, he glorified the state and the military-ind­ustrial complex. The kind of figure right-wing ideologues would find useful for what they call “nation-building”. He was after all named for president by the BJP regime led by A.B. Vajpayee. In an old 2002 article in Outlook, I find this quote from Tarun Vijay, then editor of the RSS mouthpiece Panchjanya: “Indianism is...Hindutva. That does not mean that Muslims should convert to Hinduism or Christians should go to temples. What it does mean is that you can be what you like but share the same vision of Dr Abdul Kalam.” The piece also mentions the fact that his pals in isro called the late president Kalam Iyer. The nomenclature, no doubt, was also a reference to his vegetarianism, his knowledge of Sanskrit and the Bhagwad Gita and his playing of the veena. 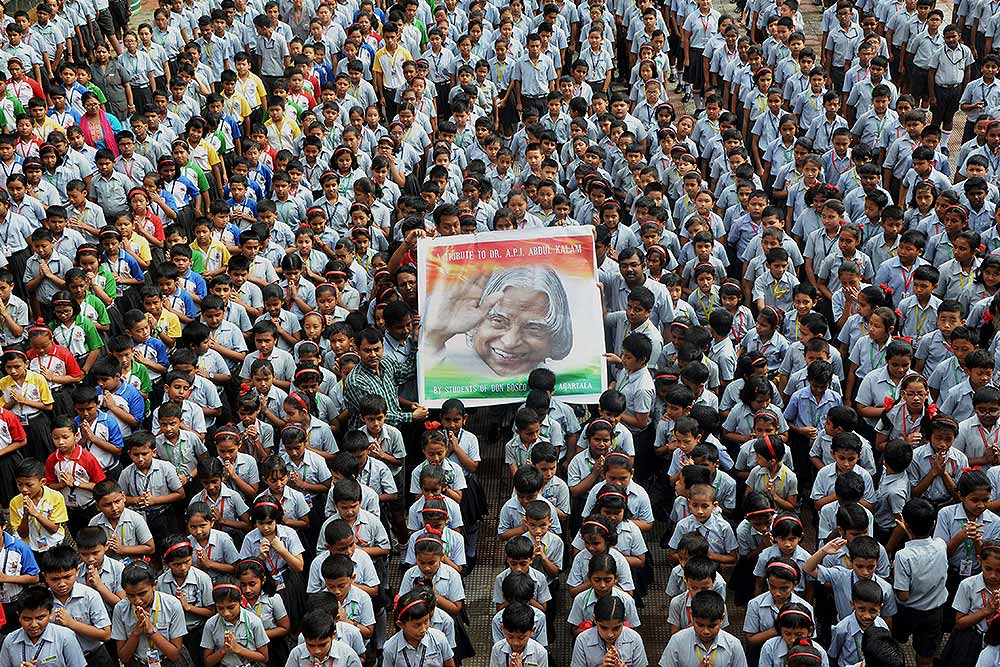 Kalam was also to my mind the ‘Perfect Muslim’, the one India has sought...the kind of figure useful for ‘nation-building’.

As someone who does yoga and suryanamaskars daily and has also attempted to read parts of the Gita, I take umbrage with those who suggest that somehow this dilutes the fact that Kalam was a Muslim at all. I must therefore digress to the social media campaign that has begun after Kalam’s passing, suggesting that Aurangzeb Road in the heart of Lutyens’ Delhi should be renamed A.P.J. Abdul Kalam Road. I offer the suggestion: find ano­ther road to name after Kalam but why not change Aur­angzeb road to Dara Shikoh road? For those who do not know, he was the chosen heir of Emperor Shahjahan, who Aurangzeb killed in a vicious war of succession. Dara Shikoh was of a very different disposition to his austere brother and believed in the harmonious coexistence of heterodox traditions. He also translated 50 Upanishads from Sanskrit to Persian. If there is to be a rechristening of roads, I suspect Kalam would have approved. He is after all not the only Muslim to be part of a seamless composite tradition that has thrived in the subcontinent.

Yakub Memon had none of those shades. He is just the Very Bad Muslim, the educated chartered accountant who got drawn into a larger terrorist conspiracy. Since the current construct of Muslim equals Terrorist is now accepted across the world, Yakub quite easily fills that slot. But there are nuances to his story that the system has not been able to respond to with any mercy. They suggest possibilities even as they raise questions: was Yakub sorry for what he had done and did he want to repent? Did he have a deal with Indian agencies who promised him and family safe passage back to India? Did he expect punishment but justice from the Indian system?

The questions will hang in the air as the non-stop coverage of Memon’s hanging has also made him a larger figure in death. Had he lived, he could have been forgotten in jail, as other death row inmates mostly are. But his death will not be buried so easily. The danger is that it is anti-India forces that benefit from presenting Memon as a martyr.

In Good Muslim Bad Muslim, Mamdani exposes the caricatures of Muslims and Islam that are deployed to provide a moral cover for expansionism. He argues that analysis of terrorism is used to prop up state policy and not point out mistakes in the system. In the Memon case too, we are being told that any examination of the causes of that horrific act of terrorism is somehow a justification for terrorism and therefore inimical to the interests of the nation. In other words, the mainstream discourse has rarely touched upon the Bombay riots that preceded the blasts that were themselves triggered by the demolition of the Babri mosque. No one has really been punished for these public crimes. Yet we have a discourse where terrorism is broadly reduced to a pathology shorn of a social-political context.

But the beauty of this country is that there is also the alternative debate. Those who made the last dash to appeal for mercy for Yakub were academics, activists, lawyers and a few members of the Left parties. What they all want is for the system to work for India’s minorities, Dalits and tribals—those Indians who are often so unlucky when confronted with police, judiciary and executioner.

Kalam as president was against the death penalty (he used it just once). We must always also wonder if he would have sent Yakub to the deathly gallows or shown mercy.