What If We Had Lost?

At Lord's 1983, that is. Would cricket have emerged such a glamorous career option? Would mothers be hauling kids (and kits) to coaching camps across the country?... 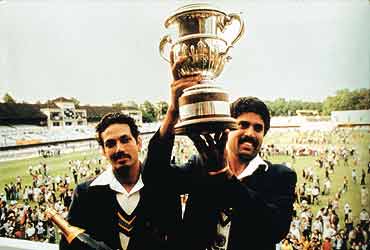 outlookindia.com
-0001-11-30T00:00:00+0553
Would cricket have emerged such a glamorous career option? Would mothers be hauling kids (and kits) to coaching camps across the country? Would hockey and other sports have been complaining of the stepmotherly treatment they say they receive after each Olympics failing? Would Sehwag have played soccer instead?

Would we have won the Benson & Hedges Cup in 1985? Would Ravi Shastri—hai! hai!—have been hailed as the champion of champions? Would Chetan Sharma have been in our memory but for that last-ball six that Javed Miandad slammed off him in Sharjah? Would the subcontinent have hosted the 1987 Cup? Would Pakistan have won the tournament in 1992? Or Sri Lanka in ’96?

Would BCCI have become the world’s richest cricket body? Would the rest of the cricketing world be looking at India with dollar signs in its eyes? Would Jagmohan Dalmiya have become such a powerhouse as to be the ICC president? Would Laloo Prasad Yadav and Sharad Pawar and Prafulla Mahanta and Amar Singh be falling over each other to get into the BCCI? Would one-day cricket have displaced Test cricket? Would Test matches still have a rest day? Would runs be scored so furiously in Tests, making results possible in virtually every match? Would coaching manuals have gone out of print with everyone playing anything-goes shots?

Would ‘marketing the game’ have become such a buzzword? Would sponsors be falling over each other to grab eyeballs and footfalls? Would we be watching cricket in between advertisements? Would most of our cricketers have become better actors than half of Bollywood?

Would Sachin Tendulkar have arrived on the scene? Or for that matter Yuvraj Singh and Irfan Pathan? Would Sachin be worried about homologation fees for a Ferrari? Would Brian Lara and Brett Lee have been asking us to buy more tyres and drink more whisky? Would Palmolive have found its ‘jawab’? Or Pepsi have everything official about it?

Would match-fixing have entered the players’ arena or the spectators’ lexicon? Or for that matter spread-betting and fancy fixing? Would Mohammed Azharuddin have his career mercilessly cut short at 99 not out? Would Hansie Cronje have been Hansie Cronje?

Would cricket have gone to Sharjah and Singapore, Malaysia and Morocco? Would cricket between India and Pakistan have been reduced to ‘war minus the shooting’? Would the national tricolour have been so misused on the cheeks and T-shirts of fans? And would Inzamam-ul Haq have rushed into the crowds to beat up a spectator who called him ‘aloo’ in Toronto?

Would any cricketer who has held a bat or ball and who can string two words together pop up on our TV screens as a commentator or an expert? Would "it-doesn’t-matter-how-they-come-as-long-as-they-come" have entered our vocabulary? And would Hrishikesh Kanitkar have become such a superstar for scoring a boundary—four runs!—in Dhaka?

Would we be subjected to Kirti Azad’s ponytail and, later, his politicisms, if there is such a word? Would every quizzer in India have known the answer to the question, ‘Who was the only player not to play any match in the 1983 World Cup?’ Would Parthiv Patel be returning home with a cheque for Rs 74 lakh from the 2003 World Cup before attaining the legal age of 18?

Would anybody and his aunt with a remote control in their hands have an opinion on what went wrong in last night’s match? Would we have had any hope of winning any of the five World Cups that followed? Would we have earned such a well-earned reputation as a bunch of chokers? Would we have had to sit through Mandira Bedi and Ma Prem Usha? Or ‘Shaz and Waz’?

Stockholm 1958: What if Pele missed the 1958 World Cup to knee injury, would Brazil be a soccer superpower?

What If Advani, Not Vajpayee, Had Been PM?