What If There Were No 24-Hour News Channels?

For one half of the population life without 24-hour news channels would be unbearable, while for the rest it would not make an iota of difference. 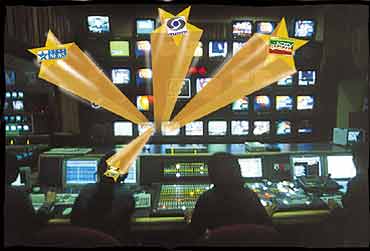 outlookindia.com
-0001-11-30T00:00:00+0553
We live in a vertically divided country. For one half of the population life without 24-hour news channels would be unbearable, while for the rest it would not make an iota of difference. You could argue the latter half comprises the sane lot who control their blood pressure and get their laughs from soap operas. For the purposes of this article, alas, I am compelled to restrict myself to the pleasures the chattering classes derive from being informed, educated, enraged, entertained, bored, deceived by the constant bombardment from this strange beast called Current Affairs—a label which encompasses everything from Preity Zinta’s hair style to Sonia Gandhi’s sarees to Rohit Bal’s shirts to A.B. Vajpayee’s eating preferences to Manmohan Singh’s parliamentary headaches. Much of the stuff dished out is of little use to the chatterers, neither does it in any way make them more aware citizens. It does, however, ensure everyone feels smug with the knowledge that he or she knows precisely what is going on around the country around the clock.

If you thought ‘instant’ referred only to Nescafe, welcome to the world of 24x7 news channels. Here everything is instant. News. Background. Analysis. Colour. Commentary. Debate. Prediction. They can be broadcast in any order but they must be instant. Thus, much of the inanity of 24-hour news channels is built into the genre.

One of the great television personalities of our age, Walter Cronkite, confesses in his autobiography that the pinnacle of his professional career remains his announcement of Jack Kennedy’s assassination "30 seconds" before the rival channel. Here is a TV journalist who brought down President Lyndon Johnson, a journalist who reported dozens of earth-shattering events and he reduces his working life to a "30-second" race. Should one applaud his dedication for being "first" or weep at his myopic vision?

In India the hunger for being first among news channels is satiated generally by fraud. And the first casualty is the word Exclusive. Not only do TV channels loftily announce that they have exclusive interviews with party spokesperson Mukhtar Abbas Naqvi but commit more egregious follies.

The day the finance minister tabled the budget, three channels claimed to have obtained exclusive interviews with the FM. Unfortunately, the interviews were aired by all three channels at the same time. (If you’ve been brought up like me in the mundane print world, the term Exclusive has a reverence one does not trifle with).

The second casualty is weight. I am slightly out of touch with daily journalism, but I am certain "copy tasters" still survive. They may be called assistant news editors or news coordinators, but their principal function is to weigh up a story and assess how it stands up to the news flow of the day. I am uncertain how these functionaries are described in news channels, but they surely exist. However, what sort of news sense they possess is questionable. Frequently, the first lead in a TV news bulletin vastly exaggerates the importance of a story not because extraordinary footage has been acquired or some unique insight obtained, but because the copy taster has misread the weight of the story. It’s when you read the morning papers and find the same story buried in the inside pages do you get its true resonance.

It will be unfair on my part to deny the role news channels have played in lighting up areas of darkness. They have added to the gaiety of current affairs coverage, they have made politics and politicians more accessible, they have been energetic in covering disasters, famines, police atrocities and the savage cruelty of caste-ridden rural India.

They have also made some of us extremely tired. I am a very occasional guest at TV studios but last Sunday I did two separate one-hour programmes in a single afternoon. Since current affairs TV is essentially a performing art, it is not the mental exertion which causes fatigue. The strain comes from the bogus "acting". I came home, watched one of my programmes at 8 pm and couldn’t stay awake for the one aired two hours later.

What If We Had Lost?