What If There Was No Operation Bluestar?

Would Indira Gandhi not have been assassinated? Obviously there would have been no pogrom in 1984, but would India be very different today? 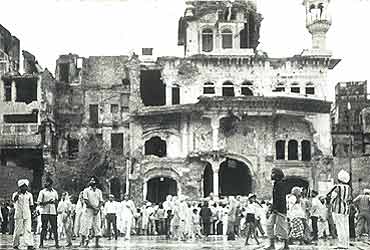 Sondeep Shankar/Saab Press
Mark Tully August 23, 2004 00:00 IST What If There Was No Operation Bluestar?

outlookindia.com
-0001-11-30T00:00:00+0553
The most obvious assumption to make is that if the army had not mounted Operation Bluestar, Indira Gandhi would not have been assassinated by her Sikh bodyguards. But I’m not sure we can go on from that to assume that there would not have been other attempts on her life by Sikhs. So much would have depended on what she would have done to regain control of the Golden Temple from Bhindranwale if she hadn’t ordered the army action. I just don’t buy the theory that she didn’t give that order. The Indian army is far too disciplined to have undertaken such a major operation without clear orders from the highest authority. What I do believe is that neither she nor indeed any of her generals thought the operation would cause such devastation. Nevertheless she knew the risks involved in any military operation in the Golden Temple, she realised the outrage there would be in the Sikh community, and so the fact that she ordered Bluestar suggests that she felt she had no alternative.

But as we are in the business of suppositions, of hypothetical questions, let’s suppose Indira Gandhi had baulked at Bluestar, what then? Indira Gandhi could have delayed taking action against Bhindranwale yet again but she realised voters were beginning to believe she lacked the will to act. In her broadcast to the nation before the operation started, the prime minister said, "an impression has been assiduously created that Punjab is not being dealt with", and that was not an impression she wanted to give with a general election on the horizon. If she had still delayed, it would probably have meant having to take even more drastic action later. I suppose it was just possible that the Akali leaders might have listened to the appeal Indira Gandhi made in that broadcast and called off their morcha. But they would not have been able to pull her chestnuts out of the fire because they had lost all influence over Bhindranwale. Supposing Indira Gandhi had listened to those advisors who recommended laying siege to the Golden Temple to starve Bhindranwale and his men, would she then have avoided arousing the wrath of the more militant members of the Sikh community and putting her life in danger? Almost certainly not. In the supercharged atmosphere created by the Akali morcha, Sikhs would probably have marched on Amritsar, with consequences even graver than the snap military operation Indira Gandhi believed she was being offered. That was certainly the view of the intelligence services and that was why the army was told that Bluestar must be short and sharp.

So even if there had been no Operation Bluestar, it’s difficult to see how Indira Gandhi could have avoided putting her life at risk. But putting her life at risk didn’t necessarily mean she would have been killed. If she had not ignored the advice to remove all Sikhs from her bodyguards or if her assassins’ plot had been foiled, Indira Gandhi would not have died on October 31, 1984. India’s immediate history would then have been very different. The massacre of Sikhs that followed her assassination would not have occurred. But what about the longer term? What about India now, would it be very different? I am not so sure. At the time many prophesied that Bluestar and those massacres would achieve Bhindranwale’s ambition of driving a permanent wedge between Sikhs and Hindus. They have not. There were plenty of Cassandras who prophesied that after Indira no one else would be able to hold India together. They too have proved false prophets.

Many in the Congress party would like to think that they would still be the undisputed rulers of India if Indira Gandhi had not died. I don’t believe that to be true. The decline of the Congress party is Indira’s legacy. Her Emergency reminded voters how precious their rights were, and so they were no longer prepared to accept the inevitability of any party coming to power.

At the same time, Indira Gandhi’s strategy of forming caste alliances had created the very politics which was to undermine it in its own northern bastions of Uttar Pradesh and Bihar. One Jagjivan Ram was not enough to convince Dalits that the Congress was their party, and anyhow Indira lost him after the Emergency. Her second term in office was dominated by the third factor which has undermined her party’s monopoly of power—regionalism. Indira’s belief that more not less centralisation was the answer to regionalism created disasters in Punjab and Kashmir, and the collapse of her party’s southern fortress, Andhra Pradesh. Instead of curbing regionalism, she set India on the path of general elections in which state rather than national issues matter and coalition governments are the outcome.

I used to think that 1984 was the most momentous year of my long stay in India. Now I wonder whether India would be a very different place if Bluestar, the mutinies by Sikh soldiers, Indira Gandhi’s assassination, the Sikh massacres, the installation of a prime minister who had never held any ministerial office, and the Bhopal gas disaster had not taken place. Looking back on that year, my image of India is reinforced. I have always seen her as a mighty ocean liner. She is sometimes tossed about by winds, and rolls and pitches in seas which would sink a smaller, less stable vessel, but she weathers the storm, and sails on. If all those storms the liner sailed through in one short year have had no lasting impact on her, I am tempted to say that the answer to that question ‘what would have happened in India if?’ will always be a dull ‘what did happen anyhow’.

Jerusalem 2000: What if Ariel Sharon hadn’t defiled Al Aqsa? Would there have been a second Intifada?

What If Reforms Had Taken Off 13 Years Earlier?