What If Medha Patkar Hadn't Gone To Narmada?

Easy. No generous R&R. India develops by stamping on the lives and rights of too many Indians. Too many of us remain ignorant of such stamping. 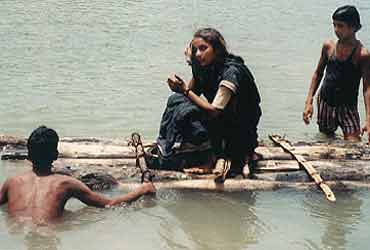 Fifty-five now, Raghuram grew up in a nearby village, Limdi. What’s interesting about Limdi? In effect, it no longer exists. With five other villages—Kevadia, Kothie, Gora, Vaghadiya and Navagam—it vanished in 1961.

OK, they didn’t actually vanish. That year, the government acquired land there to build a colony for engineers working on a new dam. It asked the villagers to move along, then built the colony. Kevadia Colony is tidy, serene. Pleasant offices, spectacular view of the Narmada, trees planted by government panjandrums.

So nice, it’s easy to gloss over the detail you nearly glossed over above: villagers moving along. Some 1,000 families, Raghuram’s among them. Many got Rs 90-250 an acre as compensation. That’s it. Then, this was routine. Later, they were promised jobs on the dam, alternative land, social benefits. Nothing happened.

Raghuram was unhappy. Because 40 years after being pushed from his home, he had still not got his due. Sometimes, a number tells a story. This one, 40, spoke of the surreal ‘development’ we’ve seen in this country. Example: pay several thousand Indians a few hundred rupees, take their land, let them go wherever. Ignore their protests. It’s in the ‘national interest’. It’s ‘development’. Build that dam.

Yet. I wrote this and you’re reading it. Which is a sign that ‘development’ like that is on its deathbed. So. What if Medha Patkar hadn’t gone to the valley? Nobody would’ve heard of, nor listened to, Raghuram. Now, perhaps you’re outraged about him. That matters.

Medha wanted to learn how the proposed dams on the Narmada would change lives there. She understood a brutal truth quickly: there were no particular plans to resettle and rehabilitate (R&R) those to be displaced. For over three decades, if Indian development had to displace Indians, they were simply told to leave. Sometimes given money, like Kevadia, but otherwise told to go. Then forgotten.

After Medha, change came. Because she protested injustice to displaced people, because they did so, the dam-builders realised that the days of just telling people to go were over. That’s why the project-affected states spelled out the best R&R packages in our history. Gujarat promised each family two hectares of land, a 500 sq m plot, Rs 12,000 in grants, insurance.

And much more, including schools and health centres for resettled villages. A big step up, from giving Raghuram Rs 250 and watching him leave. Sure, the packages have too often remained on paper. Sure, Raghuram still seeks justice. But all that’s another story. The packages are there, and that is indeed a step up.

So again: what if Medha hadn’t gone to Narmada? Easy. No generous R&R. India develops by stamping on the lives and rights of too many Indians. Too many of us remain ignorant of such stamping. Too many of us mouth the inanity: "Someone has to sacrifice for the country to progress!" Someone, as long as she ain’t me, and somewhere too remote for me to care.

It’s that India that Medha’s journey began to stand on its head. It’s that perverse ‘development’ that’s now challenged. It’s the rights of swathes of Indians that will now be fought for. It’s democracy itself that is now strengthened.

This, despite disappointments, this and nothing less is the triumph of Patkar and the movement she shaped.

Punjab 1963: What if there had been no Bhakra Nangal? Would we have had the Green Revolution?

What If Godhra Hadn't Happened?