What If Ingleesh Is Free? 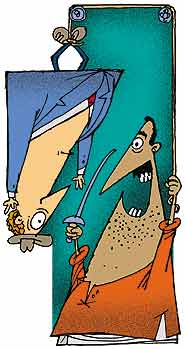 A cautionary note: there’s only so much chance that an ornery cowhand whose two-paise worth of English brings in the bacon is going to ask for an outright ban on the language. But what an option it might have been! A Sanskritised landscape! Taporis spouting Kalidasa...LS debates in devabhasha (Krama! Krama! Aham Somanatha Chattopadhyaya vadaami!...) So we enter this game of historical chance with one glittering possibility foreclosed. Maybe call this: what ifn’t? In the face of what I am—Macaulay’s bastard, like you, dear reader—does it matter what I amn’t?

Macaulay, for those who came in late, is the one who instituted our pimping class. The software programmer who rewrote our code for good. In our trinity of law-givers, the wrong ’un between Manu and Ambedkar. Now, Old Mac believed "half a shelf of a European library" was worth more than "the whole native literatures of India and Arabia". In our times, Rushdie offered a variation on the theme, posing Indian English writing as the rich cousin in a land of famished "native literatures". This value inversion accompanied the formal infusion of English in our veins. Let us negotiate this again, bottom-up. Let us reconcile to our contaminated blood.

So what is this? A new Jim Crow law? A decree for mass linguicide? (Anglophones of India unite: you’ve nothing to lose but your temple bells, your grandma’s multiplication tables, your native jabberwockies, your Ahir Bhairavs and Vathapi Ganapathims!) No, take a deep breath of polluted air and say: not slavery, but its abolition. Freedom to abuse the Queen’s tongue. It’s time to turn Old Mac’s anthropological project back on to its author.

Talking of royalty, here’s a liberating gust from Tok Pisin, a Melanesian Pidgin born on 19th century plantations. An ethnic mish-mash of South Sea Islanders, slaving away on indigo, took English, gave a royal tweak to its grammar and minted their own Wantok (One Talk). The first, ravishing lesson in pidgin revenge: Nambawan Bigflo Blong Missis Kwin. What species of life-form is that? Why, a moniker for Prince Philip! Number One Big Fellow Belonging To Mrs Queen! (Ouch!) Take that, your excellency, as a small reciprocal gift from world culture. (One Ken Campbell was so taken with this, he did a whole Pidgin Macbeth, rendering the Bard in "rude voodoo telegrams".)

Now, what if we hadn’t curbed our natural flair for hybridity? Even the Oxford English Dick reveres our pidgin—just last week, it enriched English with the word ‘chamcha’ (as if our proud race needed oed to tell us what that meant!) Thing is, as a culture, we’re now in acquisition mode. And English is just a special object we submit to our voracious appetite. Pick right off the shelves in the supermarket of intangibles. The way we crowd our homes with Turkish evil eyes, Toulouse-Lautrec posters, Santhali trinkets, the last ethnic thingamajig on our Malaysian rubberwood cabinets. Drinking plastic from earthen cups. As if to recompense some terrible emptiness inside of us.

So after double roti, kapda aur makaan, what? Some worldified English. Between Hollywood and Buddy Holly, Guardian Review and Google, we’ve installed a multi-port fuel injection system for language: phreaking into tech registers, F-1 and net slang, jargon from Dow Jones to diplomacy, haute cuisine to low couture, po-mo bibles to Aussie sports commentary. And making a mean mulligatawny out of it all. It shows in our exhibitionistic wordplay, our recklessly code-mixed ads, the vicious punning of news headlines. We are a linguistic nouveau riche. And yes, barring the sorry practitioners of the Stephanian School, it shows. Editing yields brief, revelatory moments ("That’s not my language! Don’t put any of your English in it."). See what’s at stake here? The first flush of ownership. My English.

It began in the streets, where all battles begin.The signs are everywhere.‘We do penchar, Ding Dong Car Care’. Those first, ginger steps have grown to self-assuredness. No more masking Hari & Sons as Harrison’s: the morning has dawned on Harpreet Ford. Primus inter pares! Down south: feeling brunchish? Just order...two Omplates & chaya. A diabetic among us? No matter. Make that oru witth, oru witthoutt... geddit, sugar? Stop by at that cream-cubicled, airless hut: INDIA PHOTOSTATE. (What more prophetic sign of our status as a xeroxed people!) Then come home on a monsoon evening to a five-year-old’s chirp: "Achchan, machchar has biten you also..." (Three-language formula!)

Sadly, by the time she’s 15, we’ll have dutifully straightened out those kinks. Brought in line with a Wantok that rules from Auckland to Anchorage. An endnote: the purest opposition to English in India came not from the RSS (they’re of the same noble Mac-wallah bloodline) but from the Lohiaites. But there’s hope yet. We only need wait for culturally lobotomised Lohiasons to return from Yale, talk corporate governance with one eye on Nambawan Bigflo’s throne. Then turn around and say: Aha, machchar has biten you also!

Palestine 1881: What if Ben-Yehuda hadn’t revived spoken Hebrew? Would it be as dead as Sanskrit?

What If There Were No 24-Hour News Channels?