What If Indira Gandhi Hadn't Been PM? 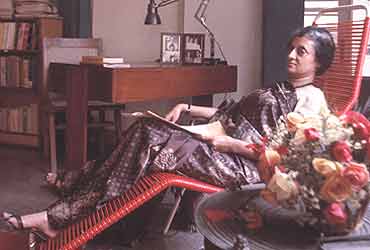 outlookindia.com
-0001-11-30T00:00:00+0553
If Indian politics is the art of the possible, economics has been the crafting of the impossible. Thirty years ago, today’s economic scene would have been a wild dream—like inventing an airplane in the 12th century. But what if all this was possible in the ’60s? It might have been if Indira Nehru Gandhi had not been chosen in 1966 to preside over a fledgling, struggling economy that just yearned to spread its wings and fly. But instead of giving power to those wings, Indira clipped them. She built up—deliberately yet ignorantly—a structure of enormous control that hobbled the administration and economy. The woman who ruled India the longest, that is from 1966-77 and 1980-84, presided over much of the three decades of the 3.5 per cent Hindu rate of growth. She also introduced the "socialist, secular" and "integrity of the nation" bits in the Preamble to the Constitution in 1976-77.

Rakesh Mohan, now RBI deputy governor, describes the period 1966-80 as "the dark age for the industrial economy". A period that spawned most of our draconian laws like FERA, the MRTPA, COFEPOSA and the Urban Land Ceiling Act. When we nationalised our coal mines, general insurance and banking. When we had a byzantine trade policy to discourage exports and altered it every month to suit interest lobbies. When we reserved hundreds of items for the small sector, fixed a complex price structure for petro products and encouraged preferential treatment for public sector and government procurement. And we kept tweaking the system till the ’80s.

That period was an unexpected irony after India started industrialisation with the help of the world’s best economic brains like Kaldor, Rosenstein-Rodan, Tinbergen and Frisch, and actually succeeded in meeting industry’s needs for infrastructure. The Industries (Development and Regulation) Act, 1951, says ex-chief economic advisor Ashok V. Desai, gave legislative sanction to wartime controls. And this led to "the regulatory arteries hardening after the mid-’60s", writes Mohan, with government interventions like licensing, quota, high import tariffs and subsidies. To set up an industrial unit, entrepreneurs had to run from pillar to every post.

In 1964 itself, Manmohan Singh, who shot to fame with inflation management in the early ’70s, had come out with a cautiously argued study on the government’s shooting-itself-in-the-foot export strategy. This, at a time when stressing the benefits of trade invited being called a reactionary outcaste. Little changed. Mohan writes: "The Indian tragedy is not that we adopted an anti-export bias in the ’50s, when all developing colonial countries did, but that we didn’t change in the ’60s when world trade grew by leaps and bounds."

If exports were free, higher forex earnings could have comfortably financed the heavy industry strategy. Instead, going to the IMF became standard practice, even as we were supposedly practising self-reliance. Says ex-RBI governor Bimal Jalan: "In the 36 years of 1956-91, there were balance of payments difficulties in 30 years," forcing India to seek extraordinary aid six times from bilateral donors and the imf, thrice between 1966-81.

So, what led to the growing paranoia? A partial explanation is the extraordinary situation in which the Syndicate thrust power upon an insecure, immature Indira —"the malice, jealousies and envy, with which one is surrounded" and the lack of "one single person to whom one can talk or ask advice", in her own words. A more plausible excuse was the economic collapse—the crisis in food and forex, the plan holidays, Indira’s perceived need to ally with the US, the 57 per cent devaluation and the wars. Agriculture was saved by the green revolution, everything else she wrapped up in her fist. Many far-reaching decisions, like bank nationalisation, were taken pre-emptively, via ordinance.

Why didn’t Indira change course mid-stream, when as many as six committees wanted licensing liberalisation? That the emperor had no clothes was too painful for the system to acknowledge. Her more pressing need was to tackle the erosion of political control, the Congress’ collapse and the growing popularity of Jayaprakash Narayan. Exports stagnated at 4.4 per cent in 1970-75; industry grew at 5 per cent. Import duties zoomed from 18 per cent of total imports in 1955-60 to 55 per cent in 1985-90. Says economist Pranab Bardhan: "Over time, the state accumulated powers of direct ownership and control to an extent unparalleled in Indian history." The Constitution was amended 28 times in 1966-80 to protect the various new laws and allow ordinances through. It was a kind of precursor to the 1975 Emergency. The courts grew more socialistic, entertaining numerous pils, but the executive triumphed in the end.

This capturing of the commanding heights nurtured the illusion among the faithful of a painless socialism from above. Both at home and abroad, communist cooperation was sought, yet not taken seriously. As Jagdish Bhagwati wrote in ’98, "We had reproduced beautifully the disadvantages of communism, without any of the benefits!" This was clear from the growth of a slippery, borderless middle business class, traders and commission agents. The number of registered firms went up from 7,000 in ’56, to 2,46,000 in ’76, with a taxable income higher than total corporate income. Development restricted to slogans, the state adopted a regulatory and patronage-dispensing role that has changed little even after reforms—undoubtedly a direct legacy of Indira.

The bankruptcy was inevitable. So were the reforms. The First Plan modestly wanted to double per capita income in 27 years; the actual achievement wasn’t even half. Would things have been vastly different if a secure Morarji Desai or a benevolent JP had been PM? There were never any takers for laissez faire in India, but many argue that with JP, who had effectively organised landless labour and the poorest farmers, India may have had a better shot at the social sector goals of poverty, literacy and health. And if JP had got land reforms going, which Indira did her best to discourage, we’d have had growth-promoting conditions akin to East Asian countries.

Runnymede 1215: What if the Magna Carta was not signed? Would any law be able to curb a ruler?

What If We Had Opted To Become A Hindu Rashtra?