What If India Hadn't Gone Nuclear?

Would Pakistan have still gone nuclear? Would Kargil have happened? Would there be an active campaign against nuclear weapons at work in South Asia? 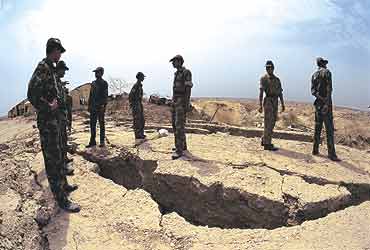 outlookindia.com
-0001-11-30T00:00:00+0553
The decision to explode five nuclear devices at Pokhran on May 11 and 13, 1998, and to weaponise India’s nuclear option was made pre-emptively, in the utmost secrecy, in the name of national security and ‘shakti’, without any objective review, in disregard of the consequences for the region and the basic interests of the Indian people. These circumstances defined the character of the event. Whatever rationalisation the BJP-led government and the apologists of Indian nuclear weaponisation offered, the "six" counter-explosions conducted by Pakistan in Chagai on May 28 and 30, 1998, were understood everywhere as the answer to the destabilising Indian nuclear explosions: they are unlikely to have happened without Pokhran II. With the 11 claimed explosions, South Asia became a much more dangerous place.

Pokhran II and Chagai and talk of weaponisation, deterrents, induction, deployment, nuclear doctrines, ‘no-first-use’, nuclear weapons for ‘self-defence’ and ‘peace’, tit-for-tat demonstrations of missile capabilities, early warning systems and so forth introduced a deadly new calculus in the Indo-Pakistan relationship. In the two-week window between Pokhran II and Chagai came statements from top persons in the Indian government that made them sound like aspirant Unabombers. Scientists associated with the Indian nuclear and ballistic missile programmes also sounded a vainglorious note. In a May 17, ’98, boast that has not been explained or elaborated subsequently, one top expert claimed on behalf of the department of atomic energy and drdo that with Pokhran II India had gained the capability to "vacate" all nuclear threats!

After the initial euphoria over the explosions wore out and competitive claims, boasts and putdowns about the two rival South Asian nuclear programmes generated much public confusion and anxiety, conciliatory signals were sent out to Pakistan in an attempt to manage ‘safely’ what looked very much like a nuclear standoff. The welcome resumption of the process of official dialogue at various levels led up to PM Vajpayee’s bus ride to the border and the Lahore summit. But what came of the Lahore exercise fell far short of the minimum required to bring the situation back under control.

The competitive testing and induction of short-range and intermediate range ballistic missiles introduced major new tensions in the Indo-Pakistan relationship. With Islamabad promising to maintain "a reasonable deterrence in all areas, be it strategic or other weapons and indigenous missile programmes," it was clear that a risky arms race was on.

And then came Kargil. The linkages between nuclear weaponisation in South Asia and the Kargil conflict are arguable but I believe The Hindu correspondent Praveen Swami is right when he argues in his insightful book, The Kargil War, that Pokhran II transformed "in fundamental ways...the spectrum of possibilities available to Pakistan to secure its objectives in Jammu and Kashmir." He shows how, along with Chagai, it "blew apart the shared assumption that an escalation of violence in J&K beyond an unmeasured, unstated, yet mutually understood point would lead to conventional war". This was "not only because the rough nuclear parity established...inhibited India’s use of its superior conventional forces, but because the very prospect of a generalised military engagement would inevitably invite rapid US intervention."

The security rationale for India’s nuclear weapons suffers from ambiguity as well as a serious credibility problem. Overt weaponisation has been justified as a necessary insurance against nuclear blackmail by the P-5. On other occasions, the alleged nuclear threat posed by a hostile Pakistan or, more accurately, Pakistan’s nuclear capability, has been offered as the rationale. By contrast, Pakistan’s nuclear doctrine suffers from no such ambiguity: it has always maintained that its nuclear weaponisation is India-specific and nothing more. India’s post-Pokhran II nuclear policy and nuclear defence posture have succeeded only in degrading the country’s security.

Secondly, Pokhran II amounted to hijacking India’s independent and peace-oriented nuclear policy and twisting it out of shape. It was a policy that had been shaped over half a century of independence. It consistently advocated the abolition of nuclear weapons. The Six Nation Initiative launched by Indira Gandhi in 1983 and Rajiv Gandhi’s Action Plan for a nuclear-weapons-free-world were important nuclear disarmament initiatives at the global level. At the same time, the policy was able to withstand the test of various external challenges as well as pressures mounted by the enforcers of the 1968 discriminatory global nuclear bargain. The essence of the bargain is the division of the world into five nuclear weapons states, the ‘haves’, and the rest, the ‘have-nots’, and the imposition of two completely different sets of rules for the two categories.

Thirdly, Pokhran II has imposed major economic costs the implications of which will become clear only in the next decade. Estimates of the cost of India’s ongoing nuclear weaponisation vary but some quick calculations suggest a ballpark range of Rs 50,000 crore as the minimum cost of a programme, defined as "acquiring a second strike capability comprising a triad delivery (by aircraft, land-based missiles and submarines) of 150 bombs," over the next decade. This is almost certainly an underestimate—unless efforts to institute reciprocal restraints between India and Pakistan succeed.

Fourthly, there is an unintended positive outcome of Pokhran II. An active campaign against nuclear weapons is at work in South Asia; the joint 2004 Magsaysay Award for India’s former chief of naval staff, Admiral L. Ramdas, and Pakistan’s Abdur Rehman is testimony to the effectiveness of this movement. Pokhran II has made the neighbourhood a much more uncertain place but the ongoing process of detente between India and Pakistan, the mechanisms that have been designed to promote this process, and above all popular sentiments against nuclear weapons provide an opportunity to put reciprocal restraints on nuclear weaponisation in place. India and Pakistan must agree as early as is politically feasible on non-induction and non-deployment of nuclear weapons. (Induction is giving nuclear weapons to the armed forces and training them in nuclear warfare. Deployment is fitting nuclear warheads on to delivery systems, that is, certain types of aircraft, ballistic missiles and submarines.) A concomitant requirement is to stop the process of installing early warning systems, because, as several experts have pointed out, early warning systems in South Asia have "no significant utility" and only "increase the danger of inadvertent nuclear war."

While the effects of Pokhran II and Chagai cannot be put back into the bottle, given the apparently modest pace of nuclear weaponisation over the past six years and the favourable political factors, these effects can yet be neutralised to a significant degree.

N. Ram is Editor-in-Chief, The Hindu and group publications, and author of ‘Riding the Nuclear Tiger’.

Cuba 1962 : What if Khrushchev or Kennedy had pressed the button in the Cuban missile crisis?

What If Harshad Hadn't Been Caught?