What If 'Hum Do, Hamare Do' Had Worked?

For starters, the population of India today, based on crude birth and death rates, would have been 610 million. But, them, Sachin Tendulkar would not have happened... 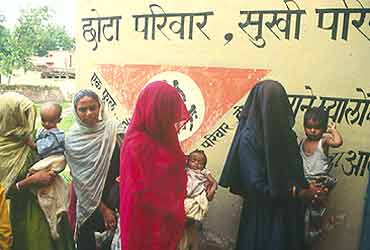 outlookindia.com
-0001-11-30T00:00:00+0553
Four years after independence, India conceived a family planning policy but only its women delivered. Despite becoming the first country to adopt a national policy for limiting a great Indian proclivity, India is expected to overtake China in 2034. At the time of independence there were 345 million Indians. The world took 454 years to go from 345 million in 1310 AD to a billion; India took just 52 years.

It was not for want of trying to slow down. The Post & Telegraph Department made marriage greetings in attractive envelopes that curtly said, "For happy married life please be in touch with the Family Welfare Centre". In the late ’60s the government pleaded, "Two or Three Children...Then Stop". When the fertile ’60s ended, the campaign cancelled the kind option of the third child. "We Two Ours Two, Horn Ok Please," the highway trucks began to say. But all that came to nothing. It was mass media’s biggest failure in human history.

Though the birth rate has come down significantly and fewer Indians are dying without a fight, there are so many of us today that this country adds an Australia every year. What if, starting from 1970, Indian couples had stuck to two children? What if the total fertility rate (TFR) or the average number of children born to a woman in her lifetime had been two instead of 5.4 in 1970; 4.95 in 1980; 3.8 in 1990 and 3.06 in 2000?

For starters, the population of India today, based on crude birth and death rates, would have been 610 million. That is a full 400 million less than a billion.

If the TFR were two in the seventies the Indian population would have actually declined during that decade because just 15 babies per thousand Indians would have opened their eyes to the light of day while over 17 per thousand Indians kindly shut theirs forever. In the mayhem of mid-’70s Emergency, Sanjay Gandhi did try to force matters. Huge but unconfirmed numbers of young men were forcibly sterilised. Government officials, even schoolteachers, were given orders to induce a predetermined number of males to endure vasectomy or nasbandi, as it was called. If they failed to meet the target they risked losing their monthly pay.

Emergency’s war against an Indian pastime was largely grim and the exact numbers of men who were sterilised will never be known, but Sanjay Gandhi’s efforts clearly failed. What if he had succeeded?

"India would have greatly benefited," says Khushwant Singh, one of the more famous supporters of what he calls "compulsory family planning". According to him, the mammoth inverted-red-triangle campaign of the government, which poignantly implores people even today to please stop procreating, "has failed miserably, its impact is negligible". But there are people who believe Sanjay Gandhi’s methods had an adverse impact on family planning in the country. "For years it made people wary of family planning," says Coomi Kapoor, then a young Indian Express reporter.

What if we were just over 600 million today? Assuming that the effect of the diminished population will have nothing more than a negligible impact on the gdp, India’s per capita income would have been on a par with China at around $5,000 (purchasing power parity), far higher than the reality of $2,900. The percentage and number of impoverished Indians would have been considerably lower though it is difficult to ascertain the exact figures. But India would still have been the great hope for consumer giants because the hypothetical depletion would have occurred among the poorest Indians and not among the 250 million strong middle class which largely hails from small families anyway.

To ask a question one more time, what if starting from 1970, all Indian couples had decided to stop at two children? Sachin Tendulkar would not have happened. Ramesh Tendulkar had already fathered three when Sachin came to bat at number four.

Beijing 1979: What if China failed in its one-child policy? Would every third human be Chinese?

What If Sanjay Gandhi Had Survived The 1980 Air Crash?