What If He's Innocent? 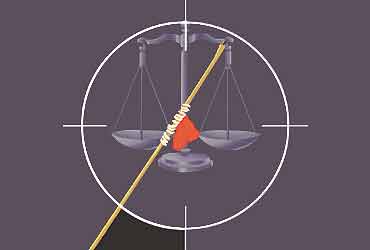 outlookindia.com
-0001-11-30T00:00:00+0553
Ever since the Chennai police arrested Swami Jayendra Saraswati, the Shankaracharya of the Kanchipuram math, on the night of Diwali, I have been filled with a sense of foreboding that refuses to go away. The source is the following: what if, after having accused him of murder, of causing the disappearance of evidence, giving false information to screen the offender and criminal conspiracy, then arresting him in the middle of the night, putting him in jail with common criminals, proclaiming his guilt to the entire Indian media in stentorian tones that brook no possibility of error, and adamantly resisting the grant of bail...what if, after all this, the Tamil Nadu police are unable to prove anything against him and have to let him go? What will this do to a political system that is poised so precariously on the knife edge of religious bigotry and intolerance? How will it affect the very concept of secularism, which came under such sustained battering during the six years of BJP/NDA rule? And most important, what will it do to hundreds of millions of ordinary Hindus, to whom their religion is their unfailing crutch in times of adversity?

My fears are not without foundation, for the rate of conviction in criminal cases in this country is one per cent. The police know this. The judges know this. That is one reason why, with unfailing regularity, the former have taken to trying and condemning those whom they apprehend before the bar of public opinion instead of a court of law. They do this by blazoning their charges across the front pages of the tabloids before they have gathered enough proof to convince even the lowliest magistrate with pretensions to independence, and obtaining remand after remand to keep the accused in jail for the maximum length of time permitted by law.

In the end, it no longer matters whether the case gets proved in a court of law. The accused person's name is tarnished beyond repair; his business and his status in society destroyed; his life torn to bits; and very often his health permanently impaired. Punishment has been meted out and the police, along with their complaisant magistrates, have been prosecutor, judge and jury.

Over the years, some of the most illustrious people in India have become victims of this pernicious practice. Among the early ones was V. Krishnamurthy, former chairman of Bharat Heavy Electricals and secretary to the ministry of heavy industry—perhaps the best technologist-manager the public sector ever produced. Two years ago, it was Shankar Sharma, then the head of the fastest growing brokerage firm in Mumbai, who had made the mistake of putting in seed capital for the e-magazine, Tehelka. These and countless thousands of others have been arrested first, and kept in prison while the police has struggled to make a case against them, eventually to no avail.

Although the 'investigation' against the Shankaracharya is still in its early stages, there are disturbing signs that it could very easily go the same way. All that the police seem to have against him for the murder of A. Sankararaman, manager of one of the temples at Kanchipuram, is that the man had developed what was clearly an unhealthy obsession with denigrating, opposing, frustrating, and even threatening Swami Jayendra Saraswati. The police further claimed that some of the accused whom they had arrested had implicated him in their crime. A cell phone known to be used by the Shankaracharya also had a record of calls made to some of the accused both before and after Sankararaman's murder. Ten lakhs of rupees had been withdrawn by the Kanchi peetham and distributed to 'the accused'. Motive, means and modus operandi, all therefore seemed established. At first sight, therefore, one can hardly blame the Chennai high court for not having granted the Shankaracharya bail.

It is only subsequent events that have shown how tissue-thin this alleged chain of prima facie evidence actually was. Sankararaman, it turned out, had been harassing the Shankaracharya for forty years. In fact, he had gone so far that there was an open-and-shut case of harassment against him, but the Shankaracharya chose not to lodge it. That made the timing of his decision to eliminate him difficult to explain. The two key witnesses on whose word he was charged with complicity and arrested later claimed that they had been tortured into signing blank pieces of paper for the police. The account in the hdfc bank did not exist, and the prosecution amended its petition to name another bank in its place.

The actions of the police since November 24 also show that it is badly rattled. That is the most probable reason for its lodging a second, relatively minor accusation, of another functionary of the math and his family being attacked and beaten up. And as if that were not enough, the state government has transferred both the heads of the 29-member team that had been formed to pursue the case against the Shankaracharya. Does that not sound familiar?

While the case against Jayendra Saraswati is evaporating into smoke, evidence is accumulating of the way in which this has been turned into a political crusade to denigrate Brahminism by both the DMK and the AIDMK. This is the time bomb that I am staring at, petrified with fear as I write my column. To our politicians nothing is holy, but this is a Hindu country. Let no one ever forget that. If it turns out that the most revered icon of Hindu sanatana dharma has been shamed, humiliated, and persecuted without reasonable cause, we could see the beginning of a caste-cum-religious conflagration that may not be doused in our lifetimes.

A Bitter Pill For Aam Aadmi