What If Ambedkar Had Converted Earlier?

It would've accentuated India's very real internal social turmoil and to some extent robbed the freedom struggle of its powerful coherence... 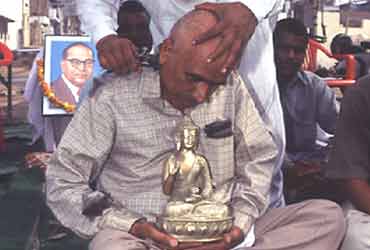 outlookindia.com
-0001-11-30T00:00:00+0553
The Jabbar Patel Interview: Sometimes history wears the clothes of destiny . Man arrives at a moment in time apparently impelled by fate. Babasaheb Ambedkar came to such a pass on October 14, 1956. Two decades after he announced that he wouldn’t die a Hindu, he, along with over 5,00,000 passionate low-caste supporters, embraced Buddhism. It started an unstoppable rising among India’s long oppressed who joyously cast aside their Hindu identity. But two months later, Ambedkar died....

What if Ambedkar hadn’t died so soon after the historic conversion?
It’s obvious the Dalit movement would’ve been strengthened infinitely. But Ambedkar himself knew that his body was failing, that he did not have too much time left. More important than what would have happened if he had lived longer is another more disturbing question....

...What if Ambedkar had converted 21 years earlier?
Yes. Had he converted in 1935, it would’ve accentuated India’s very real internal social turmoil and to some extent robbed the freedom struggle of its powerful coherence. But, at the same time, the Dalit movement may have had some natural problems. He had to prepare his people to eve ntually shed their religion. Losing the religion one is born into is not an ordinary affair. People had to be herded in that direction slowly while waiting patiently for glimmers of hope, exhausting all other options. Even before Ambedkar presided over the conversions, or considered losing his Hindu identity, low -caste Indians had sporadically converted on their own to Islam and Christianity. But there was no mass strength in that movement. More importantly, in 1935 those who chose to follow Ambedkar would have been from his Mahar caste in his home state, Maharashtra, and not the other castes and subcastes from the rest of the country.

What if Ambedkar had chosen some other religion?
This was something that worried several leaders. The Sikhs were wooing him, the Christian missionaries were wooing him. And had Ambedkar chosen Islam, as some Muslim clerics were urging him, it would have tipped the balance against the Hindus—with serious implic ations on all future developments in those eventful days. But I believe that even in 1935 if Ambedkar had chosen to convert, it would have been to Buddhism. He had been fascinated with Buddhism since his childhood because it offered happiness within a man’s own lifetime and not in the distant future of afterlife. As he once said: "All creators of religions claimed themselves to be saviours but Buddha was satisfied with being simply a guide. "

What if he hadn’t converted at all?
In my opinion, Dr Ambedkar used conversion as a last resort, when everything else failed to open the eyes of Indian society. He was an optimist. But when even a progressive man like Nehru—due to internal pressures from his party—became averse to pursuing the Hindu Code Bill (which gave greater rights to women) in 1952 keeping the coming elections in mind, it was a big jolt to Ambedkar’s optimism. The reasoning then was that Partition had hurt the Hindus deeply and Nehru did not want to inflict another blow through the Hindu Code Bill. But that reasoning was not good enough for Ambedkar. He unders tood that there was no point in waiting for society to change. The idea of shedding Hinduism grew stronger in his mind and when it transformed into a gigantic resolve, he took the extreme step and converted in 1956. If he had done it earlier, say in 1935, it is possible that the conviction of his followe rs may not have been as strong as it was in 1956.

Jabbar Patel, director of a widely acclaimed biopic on Ambedkar, was talking to Manu Joseph.

Louisville 1967: What if Cassius Clay hadn't converted to Islam and become Muhammad Ali?

What If The South Had Seceded?