What Exactly Is On His Mind? 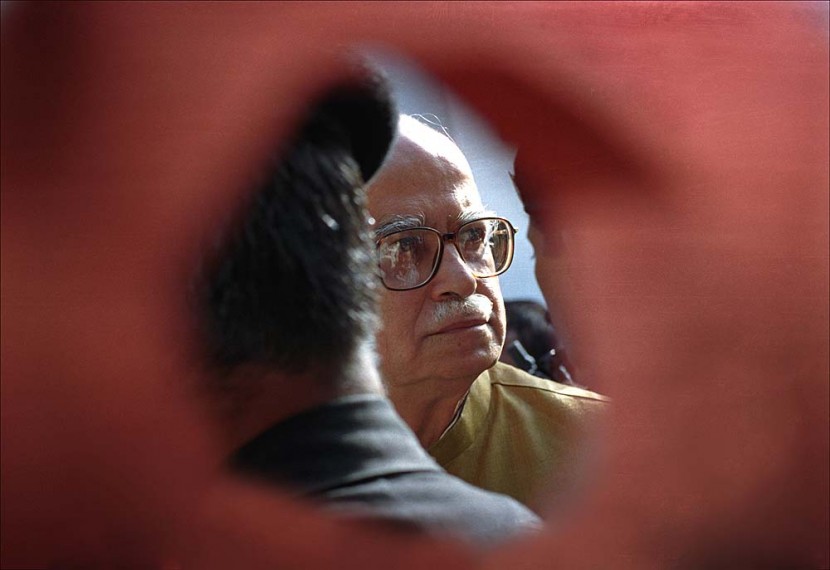 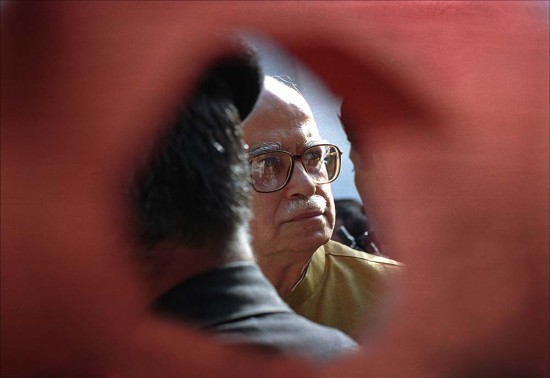 “The gods had condemned Sisyphus to ceaselessly rolling a rock to the top of a mountain, whence the stone would fall back of its own weight. They had thought with some reason that there is no more dreadful punishment than futile and hopeless labour.”

—Albert Camus
The Myth of Sisyphus

Unrewarded labour is indeed a terrible human condition. Lesser men and women lose the yen to keep going. But not L.K. Advani, the self-confessed “political Hindu” with the Protestant work ethic. Still, in moments of existential angst, he may have contemplated the fruits of his many labours. If his goal had been to bring the BJP to the national stage, he had achieved that two decades ago. But if the goalpost had shifted along the way to becoming the prime minister of India or, short of that, remaining in perpetuity the pre-eminent leader of the BJP, he must feel thwarted.

To understand one’s own limits is a sign of great wisdom, they say. Advani showed this in putting aside his own ambitions to project Atal Behari Vaj­payee as the PM-in-waiting in 1996. In that sense, he is very different from Narendra Modi, whose drive to become the Absolute Leader is all-consuming. If Advani once let go to conquer, Modi unabashedly seeks grea­ter control at every step of his journey. The collateral damage to the NDA is already visible in the imminent exit of the JD(U) from the alliance. It is in this context that the app­arently vanquished Advani could still have a hand or two to play in the run-up to the 2014 general election or in cobbling an alliance thereafter.

True, Modi supporters and a dominant section of the RSS/BJP cadre currently are displaying an almost orgiastic pleasure in “being left alone” to follow the Great Man from Gujarat, who in their view is set to conquer India. They say Advani has been diminished and the NDA demolished, a scenario that cannot be better for the ‘coming Modi era’.

Yet, beyond the hysterics on Twitter and internet sites dedicated to NaMo, BJP and RSS strategists know that other rounds will have to be won if it is to be game, set and match for Modi. Serious strategists and insiders say that another round of jousting will begin after the assembly elections in states where the BJP has high stakes, be it MP or Chhattisgarh. An RSS source also says quite bluntly: “Modi could demolish RSS/VHP and BJP structures in Gujarat because he had created the sangathan (organisation) there. But at every step of the way in his journey to 2014, he’ll meet resistance if he does not learn humility and to take people along.”

There are harsh words for Advani too who fell back on the authority of the RSS that he has claimed to be fighting for several years in order to retain a foothold in the BJP. Says an RSS source, “He tur­ned to us when he wanted Vajpayee to make him deputy PM in 2003; this time too he contacted sarsanghchalak Mohan Bhagwat in order to broker some understanding.” Hence the hypocrisy of his claim to be fighting RSS’s backseat driving. It’s all-too-visible both to the parivar and to the larger national audience: Advani’s occasionally tried to impress with his relative “moderation” and evolution from “charioteer to statesman”. 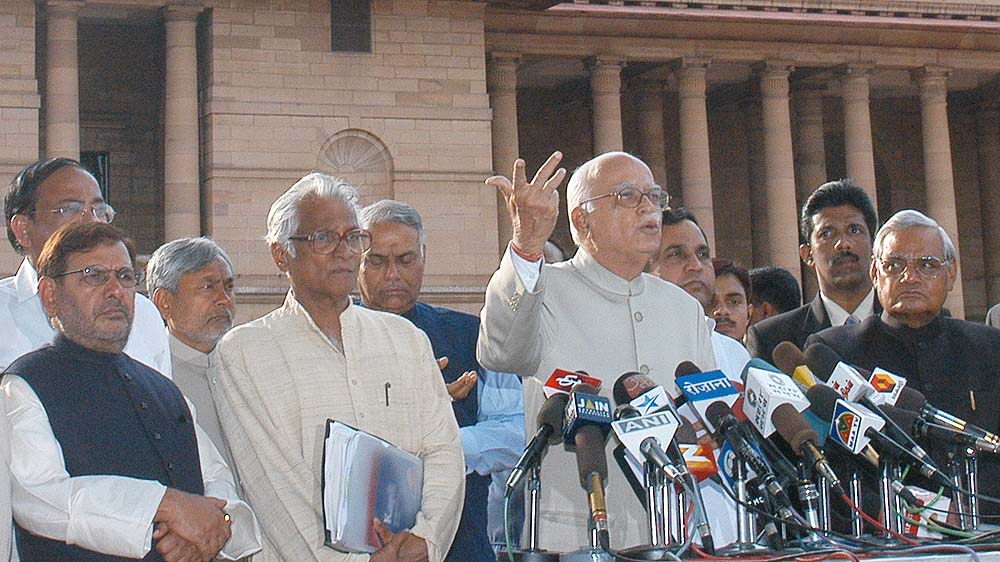 Advani and the alliance With NDA leaders, circa 2005

Yet, in the larger context of what Adv­ani may be pursuing, it can still be seen as a tactical retreat. Says a member of the BJP’s parliamentary board: “Don’t think it is over; watch the game that Advani can still play on the NDA front, either for himself or another leader of the BJP.” Advani’s journey has, after all, been one of audacious mass movements, strategic retreats, controversial turnarounds in ideology and dogged determination. At 86, he has shown the spirit to take on younger, more muscular men in the party of the perennially squabbling faithful.

He remains chairman of the much-dep­leted NDA, by virtue of which post he gets an office in Parliament. It’s also clear now that the JD(U) was banking on Advani to influence the BJP’s decision vis-a-vis Modi. Now that it has failed, they have begun the process of bailing out of the alliance. Advani can, therefore, rightfully rue the demolition of the NDA that he, Vajpayee and George Fernandes had forged. As he stays within the structure, he can continue to argue for a more inclusive politics. Even the Shiv Sena has signalled problems with Modi and exp­ressed a preference for Sushma Swaraj although equations will remain fluid before the campaign really begins.

Meanwhile, sources in the JD(U) say that Bihar chief minister Nitish Kumar will now adopt a two-pronged strategy: keep making signals towards the Third Front, yet also come to terms with the realities of Bihar. In the short term, that compels him to snap ties with a Modi-led BJP and then make an assessment of the opposition. After two terms, he will face anti-incumbency and Laloo Prasad Yadav too has recovered some ground. Hence, on playing the “secular” card vis-a-vis the BJP, Nitish can be expected to exp­lore an understanding with the Cong­ress. Sources in the Congress, meanwhile, say: “Once the alliance with the BJP snaps, it makes sense for us to seek an understanding with Nitish as opposed to Laloo who will in any case never go with any formation linked with the BJP.” The Bihar unit of the Congress also has serious issues with the RJD. By itself, the Congress is no force in Bihar. But in a three-cornered contest in a post-Modi polarised atmosphere, there will be competition for the “secular” space between Nitish and Laloo.

That, say sources in the BJP, is also the consequence of projecting Modi as the face of the BJP, although still not the PM candidate. With politics in Tamil Nadu operating on a principle overriding the secular-communal divide, J. Jayalalitha is the only prominent state leader to have signalled potential support for a Modi-led BJP. Most other parties will calibrate their strategies to play on the anti-Modi polarisation.

As a BJP MP says, “Modi could still generate far more votes for us across India, but without cooperation and adjustment with regional players, those votes will not get converted into seats.” Advani, more than any other player in the BJP, knows that. He has played the alliance game when it succeeded spectacularly under Vaj­payee. He knows the politics of “untou­chability” that he once analysed and spoke at length about. He changed the markers of acceptability in Indian politics. He also knows that his own political journey was stuck in that “secular-communal” space, something he has always been straining to overcome.

More than anyone else, therefore, it is Advani who would have a profound und­erstanding of the journey Modi seems determined to embark on. Advani would know both its potential and limitations. As different as he may be from Modi, and the two men today may be squared off against each other, they both have at different times and phases played the politics of polarisation and then sought to retreat and prevail over India. Advani failed at that although he would certainly have a hand or two left to play in national politics. NaMo, his followers state aggressively on Twitter, is certain to succeed. But then much of India does not have electricity, let alone internet connectivity.