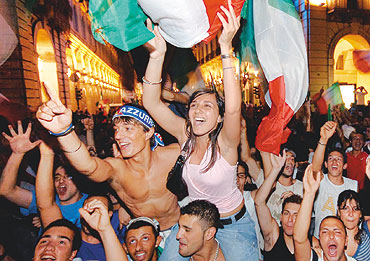 outlookindia.com
-0001-11-30T00:00:00+0553
The Italians were too busy dancing with the World Cup to worry about Zizou, the fallen god of France. Instead, they were asking if Zinedine Zidane was really the "best player of the tournament" after his red-card exit. Why award his extreme tantrum when caution should have been Z’s armour? La Repubblica, the most respected paper here, declared, ‘The World Condemns Him But FIFA Thinks He’s the Best’. Zidane’s head-butting was seen as an "overreaction", whatever the provocation. But in France, amid national mourning, Paris Match talked to a cousin who talked to Z’s brother who speculated that Marco Materazzi, the Italian agent provocateur, had insulted Z’s mother. Lip readers summoned by Brazil’s O Globo agreed, except they thought it was the sister.

The Italian media faithfully reported the allegation but didn’t quite force their man to spill what he’d said. TV and radio hissed, unearthing old footage of Zidane doing other un-Zidane-like things to drive the point home. But the tone was che ce ne frega (who cares). They had waited 24 years for the trophy, grabbed it while Zizou quickly became an also-ran. Materazzi, unrepentant and chest forward, said: "I have no need to explain." With a ‘who, me?’ manner, he denied he’d called Zidane a terrorist. "The whole world saw what happened. He hit me out of the blue. I couldn’t even defend myself." Sportswriters added this zinger—the Italians played as a team, Zizou was pretty much alone.