Two US businessmen have hit upon a whale of an idea — a BPO in the middle of the Pacific. But is it legal? 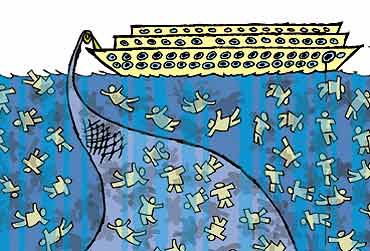 outlookindia.com
-0001-11-30T00:00:00+05:53
Roger Green and David Cook are taking the ongoing battle over outsourcing on to a new playing field—the Pacific Ocean. The blueprint of SeaCode, the company the duo have formed, is simple. Just buy (or hire) a second-hand cruise ship, dock it in international waters three miles off the coast of California, bring on board 600 software engineers from across the world, and run a round-the-clock development centre—virtually in the middle of the Pacific Ocean.

Green and Cook have coined a new term for this novel way—hybrid sourcing. So while US companies will continue to farm out part of their processes to third parties, some of it will be to a ship just off California, instead of several thousand miles away to India or China. As the ship will be moored in international waters, it will be ruled by international maritime laws (which apply to merchant ships); the employees will not require US visas or pay the steep US taxes.

"The recent boom in outsourcing has been driven by the cost factor with companies trying to drive down costs. Many companies outsource jobs that are not part of their core competency. But even these need supervision and clients have underestimated the challenges of overseeing these jobs on a long distance basis," says Cook, 42, a former captain of a supertanker. SeaCode's proximity to clients will solve these problems. SeaCode will, therefore, tap into a clientele that has faced issues while working with vendors situated far away and whose managements come from different cultures.

"A ship has a 24-hour working environment and has its own clock," explains Cook. Similarly, the engineers, most of whom will be at least post-graduate, will be expected to work in shifts, 24/7, with shore leave. "If a project is time-sensitive, the fact that our engineers can work a 24-hour schedule will be attractive," adds Green, 58, a software entrepreneur. Also, since it won't require that scarce commodity—H1B visas required in the US—it can hire engineers from Ukraine, Israel, China, India or anywhere else to cut costs.

SeaCode has got financial backing from investor Barry Shillito, a former assistant secretary of defence, and is looking out for a ship with a budget of around $10 million. "It will be a very simplified existence, and if you are a dedicated software engineer, you will really enjoy it," says Green.

The idea, says Sara Cullens, MD, Sara Cullen and Associates, which specialises in outsourcing, and author of Intelligent IT Outsourcing, a Computer Weekly Professional series, addresses significant issues. "The rework notoriously required with offshoring can be facilitated easier—particularly if the boat has a facility for the client to house some of its staff to work with the vendor for critical periods," she says.

Michael F. Corbett, of the newly formed International Association of Outsourcing Professionals and author of The Outsourcing Revolution: Why It Makes Sense and How to Do It Right, is another one cheering SeaCode. "The key point is that we live in a world where we can connect resources from all over," he says, adding that this business model cannot be dragged into the typical outsourcing debate. "We need to recognise that firms need to move to a blended model—internally and from all over the world."

But is all this legal? Cook explains that engineers will be classified as seamen under the international maritime law and will have low-level documents generally given to hairdressers, entertainers or network administrators on a passenger ship. To get it, a programmer needs to attend a one-week training class called Basic Safety. The document permits one to do jobs that are not vital to the ship's safety. But William N. France II, a partner at Healy & Baillie, a New York-based law firm that caters to the maritime industry, is not so sure. "It sounds simple, but it's a complicated kind of arrangement," he says, adding, "It sounds like a way to circumvent the H1B program. I assume if the government got wind of this, it would want to put a stop to it." Agrees Ron Hira, co-author of Outsourcing America: What's Behind Our National Crisis And How We Can Reclaim American Jobs. "The idea just shows how far US companies are prepared to go for low-cost labour. The only potential advantage to employees is that they don't pay income tax but that undercuts the American system. I don't see how this can be good for America," she says.

Despite such doubts, SeaCode is moving ahead with its plans. At a summit in Los Angeles in April 2005, the two owners discussed the idea with Indian companies, including TCS and Infosys and, according to Green, "they seemed interested". However, a spokeswoman for Infosys in their North American office in Canada said the company did not wish to comment.

But Kiran Karnik, president, Nasscom, says this is just another innovative idea from the IT industry. "I wouldn't lose more than three seconds sleep over it," he adds dismissively. "If I have to go three miles out of California, why won't I just go to Mexico where the rates are much cheaper? Realistically speaking, the logistics involved in organising a ship makes you question if you would actually get cost-effective results. If they make a go of it, good for them, but it doesn't worry us."

Critics have also referred to the idea as a "slave ship" and a "sweat ship" and question why anyone would want to put up with the minimum contract period of a year. On the contrary, says Green, "It will have the same amenities as a cruise ship." Each engineer will have his own room and bath, and it will have sports facilities, a bar, pool, fitness centre, library, theatre. Meals will be provided as will housekeeping and laundry services, and employees can socialise between shifts. (It will also have a name, a choice that's now boiled down to the SeaCode Endeavour or Captain Cook's Endeavour.)

In addition, SeaCode will be paying two-three times higher wages than what employees can earn in their home countries, though it would still be lower than a comparable job in the US. It'll also provide air fares for engineers to go home for vacations—whether it is Mumbai or San Jose. SeaCode claims it has already received several unsolicited e-mails from potential employees.

To counter the anti-outsourcing brigade in the US, SeaCode points out that it will bring back jobs to the US. "We will have an office in San Diego which will be staffed almost entirely by US citizens," says Green. Plus, the company will create local jobs to fulfil the support services required to take care of the 600 engineers. "Every one of the companies we have been talking to have moved jobs offshore, so every job we bring back is important and is on top of keeping 90 per cent of the revenues in the US." That logic may probably allow Green and Cook to convince the American policy-makers too!