For the FM, FBT is a success story in taxation, here to stay. But he's softened a few blows. 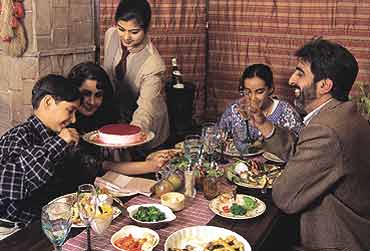 outlookindia.com
-0001-11-30T00:00:00+0553
The fringe benefit tax (FBT) has been a bone of contention ever since finance minister P. Chidambaram introduced it in his 2005-06 budget. The vitriolic response of the industry forced the finance ministry to come out with a circular (on August 28, ’05) that sought to clear the grey areas. Sadly, however, the ‘clarification’ only added to the confusion. The uproar continued with some corporates even going so far as to call it a "stupid tax".

But despite the opposition, the FM stuck to his guns. In the Budget 2006 announcements, however, he has rationalised some of FBT’s contentious provisions. But the writing on the wall is clear—FBT is here to stay. The reason: the tax had made the exchequer richer by a few thousands of crores of rupees in the very first year of its imposition. It’s also achieved something in an area where nothing else could have possibly worked—rationalisation of salary structures and the weeding out of various freebies included in the employees’ cost-to-company. Needless to say, these were at the same time expensed by employers to reduce their tax liability.

Expectedly, the industry response has been mixed. "The removal of certain genuine business expenditure from the purview of FBT is welcome. However, the larger administrative issue which the industry is apprehensive about has not been addressed," says Nandan M. Nilekani, president, CEO and MD, Infosys Technologies. Let’s now take a look at the budget changes and India Inc’s response to them.

According to Rajen D. Hingwala, ED, PricewaterhouseCoopers, FBT has not been completely rationalised, and some ambiguity still remains as not all business expenses have been excluded. Paperwork will continue to be an additional chore, if not more complicated. Harsh Mariwala, CMD, Marico Ltd, adds: "Although the reduction in FBT on certain aspects of advertising is a welcome step, the FM could have removed the anomalies working against the FMCG sector, such as unfair coverage of sales promotion expenses, which are clearly not a fringe benefit to employees."

In many cases, like the FBT on superannuation funds, the budget change is unlikely to make a difference. As per the existing provisions, any contribution by the employer to the employees’ superannuation fund is subject to FBT. However, the FM has proposed to relax this provision. Now only an amount in excess of Rs 1 lakh per employee would be subject to FBT. Last year, however, employers’ tax liability for contributions to pension and superannuation funds was as high as 33 per cent. So companies discontinued such contributions and clubbed them with the cheque salaries of their staff, which pushed employees to get their names struck off the payroll, become consultants in a bid to reduce personal tax liabilities.

In fact, the imposition of FBT last year provided much-needed fodder to most Indian MNCs, who were anyway seeking to restructure employee salaries in accordance with international standards. Ergo, the revival of the superannuation fund for these corporates seems now out of the question. But according to Pratik Kumar, executive V-P, HR, Wipro, the new proposal should not make too much of a difference to existing salary structures. As he puts it, "For organisations that made changes to their superannuation programme last year, the FBT was perhaps only a catalyst in moving towards a more direct cash structure—giving them the choice to make investments dictated by their preference. In our company, there will be no reversal based on the relaxation."

His views are echoed by Gaurav Mashruwala, a certified financial planner. "Being the arbiter of your own retirement plans is crucial," he says. "In a country where there is no social security and hardly any government support, self-directed pension plans are the only alternative for retirement planning." Not everybody seems to agree, however. Says P.V. Srinivasan, V-P (taxation), Wipro Technologies: "Last year, we found out that a lot of employees were more comfortable with cash-in-hand. But this year, the relaxation will benefit employees who have continued with the superannuation scheme."

The move has also been welcomed by the insurance sector. Says Shikha Sharma, MD, ICICI Prudential Life Insurance: "Life insurance and pensions are two of the fastest growing segments of the economy and play an important role in mobilising long-term savings. The world over, pension and retirement savings are driven by tax exemptions, and the FM has recognised the need to have a suitable policy framework in India too." Concurs N.S. Kannan, executive director, ICICI Prudential Life Insurance: "Many customers who were thinking of discontinuing superannuation plans will now continue because of the tax relief and because it allows their employees to save for retirement."

Another relief has been to the airlines and shipping industry in relation to provision of hospitality, and use of hotel, boarding and lodging facilities. Whereas 20 per cent of the total spending was deemed as fringe benefit and taxed accordingly, the proportion has been reduced now to just 5 per cent. This is a welcome step since these industries essentially and regularly deal in such expenditures.

For the industry at large, ‘tour and travel (including foreign travel)’ has been sensibly excluded from the common clause of ‘conveyance, tour and travel (including foreign travel)’, and reinstated as a new clause. The purpose of such an action is to reduce the proportion treated as deemed fringe benefits from the existing 20 per cent to the proposed 5 per cent. Probably the FM realised no company would incur 20 per cent of the total tour and travelling (foreign travel included) just for the benefit of employees—and most of it would be for legitimate purposes.

There are two types of expenses that have been excluded from FBT under the ‘sales promotion and publicity’ head. The first are expenses incurred on the distribution of free samples of medicines or of medical equipment to doctors. This was a demand from the pharmaceutical industry, which has in any case been incurring huge expenses on this score for several years. With the introduction of FBT, the bottomlines were hit further.

The second exemption relates to the payment to brand ambassadors. This is a respite to many corporates who’ve been paying crores of rupees to get film celebrities and sportstars to endorse their product. After the FBT was introduced, the first TV commercial the corporate circles remember was hll’s Lux advertisement, featuring Shahrukh Khan.

Finally, free or subsidised transport or any allowance provided by an employer to his employees for journeys between the employee’s residence and place of work has been excluded from the purview of the FBT. This, in any case, was not a fringe benefit and was a facility the employer had to provide to get his work done diligently. But the corporates now realise that the fringe benefit tax is almost a permanent one, albeit in a slightly diluted form.

Those That Got Away