Weeds In The Lawn

Apartment buildings are changing the face of Le Corbusier's Chandigarh. The old 'elite' feel the pain. 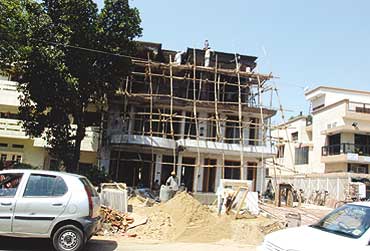 outlookindia.com
-0001-11-30T00:00:00+0553
Fifty years ago, Chandigarh was "born without an umbilical cord from the harsh plains of Punjab," as acclaimed architect Charles Correa once put it. It was a city built to symbolise the emergence of a resurgent India after the trauma of Partition. But today, Chandigarh is reeling under another trauma. Suffering the throes of assimilation with mainstream Indian cities, and paying for not conforming all these years, for standing in an often admired and yet reviled majestic isolation, for it made Chandigarh not an Indian enough city.

Would the great Swiss architect Le Corbusier, who designed this unique Indian city, be turning in his grave to see his city change in ways he never foresaw? Perhaps he would. Because, even in his lifetime he fought hard to preserve the city's character. Nearly 10 years after starting work on Chandigarh, he wrote to Nehru, "The construction of the Capitol and its lateral elements have brought to Chandigarh a marvellous landscape that no city in the world possesses. Let us not destroy it!"

Today, maintaining the sanctity of Corbusier's master plan is becoming difficult for the administration. The protectors of his legacy often collude with its destroyers. And so, bylaws that give the city its unique architectural controls have been relaxed on a 'need basis'. Its periphery, the 10-mile green zone around Chandigarh, which was Corbusier's idea and which he defended during his lifetime, is today just a law on paper. So abundant are the violations of the Chandigarh Periphery Control Act, 1955, that entire townships have come up around Chandigarh.

Even so, Chandigarh somehow managed to retain much of the garden ambience inherent in the structure of the sectors created in the first and second phases of building the city. The wide open green belts, the shady groves and bungalows tucked away amidst green canopies of creepers lining the never-ending expanses of lawns.

All this is set to change. For, in place of the old bungalows, builders and property agents are building and selling apartments with gusto. Over the last year or so, scores of old bungalows have been demolished to make way for apartments. The impetus for this activity came from the Chandigarh Apartment Rules 2001—framed to enable owners of plots to register different floors of their houses as separate units. These rules also permit division of plots larger than 1,400 sq yards into two, facilitating the construction of six apartments on a plot meant for one house. There are about 150 such apartments coming up in the city—most do not conform even to the new rules.

So far, only four plot holders have applied for permission to build apartments under the new rules. Says J.S. Shangari, who has built 17 apartment blocks here: "We don't get the apartments registered under the Apartment Rules as red-tapism in the estate office ensures three or four months of delay. So we start constructing and get approval later."

Many Chandigarh old-timers have launched vociferous protests against builders moving into the city's elite northern sectors, too. One of them, M.N. Sharma, was among the nine Indian architects who worked with Corbusier. "The city's guardians have no vision. It pains me to see where this is going. Chandigarh was an island of peace. Instead people now say, why can't it be like Ludhiana or Delhi?"

Justice S.S. Sodhi (retd) echoes this distress: "If the elite sectors are to be prevented from becoming tomorrow's slums, then the apartment construction must be stopped. The real beneficiaries are the builders. The government must adhere to the master plan, not relax rules off and on."

Most agree that rules, once relaxed, can be amended time and again to pander to builder lobby pressures. Though the Chandigarh administration permitted the construction of apartments as part of its policy to densify the sectors and enable owners of huge plots in the northern sectors to maintain them better, it is helplessly watching builders make a mockery of its rules. It is, for instance, no secret that although the rules permit construction of only six apartments on plots bigger than 1,400 sq yards, builders get plans passed in such a way that these can later be converted into 12 apartments.

Builders say that because of the high prices of plots in northern sectors, it's not viable for them to sell only six apartments. A 4,000-sq-ft apartment costs around Rs 3 crore. Under the garb of Apartment Rules, scores of apartments are being sold without bringing them under the rules. They are merrily being sold as shares i.e. the ground floor owner owns 50 per cent, the first floor owner owns 30 per cent and the second floor owner owns 20 per cent of the total property and there's scant regard for provisions like water, electricity or parking space for the additional families. As Shangari explains, "We get a supplementary agreement drawn up between the three owners which specifies the portions which are theirs and the parking facilities, common areas etc. The administration need not recognise this agreement." 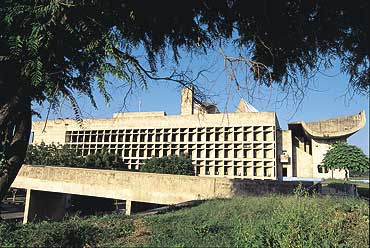 And who cares? Certainly not the estate office which is meant to enforce bylaws and check violations. When Outlook queried Arun Kumar, the estate officer who is also the deputy commissioner of Chandigarh (now sent back to his home cadre), on the city's mushrooming apartments, he flew off the handle: "You write whatever you want. I can't tell you anything. I have to survive. Bahut kuch karna padta hai (Many things have to be done)." Then, threateningly, "I'll see you in court."

Clearly there is more afoot than is visible. In recent months, the estate office has become known more for playing politics and creating controversies. There's a growing impression that the building lobby is quietly getting new rules passed.

Says senior architect S.D. Sharma, "When they quote Delhi, Mumbai, Calcutta etc as examples, they must remember that Chandigarh was never meant to be like them. Apartments should be confined to the southern sectors where there are already cooperative society flats, or else the green areas will vanish."

The votaries of apartments in place of bungalows, however, point to the "huge waste of prime urban space in Chandigarh" present in the northern sectors, some of which have plots of land as big as 4,000 sq yards. G.S. Lamba, legal advisor to the Chandigarh Property Dealers' Association, who has constructed nine apartments in the last year, says "most of these huge bungalows have elderly people as occupants, some living alone with servants. They find it difficult to maintain their houses. Besides, what is wrong if living in the elite sectors is made more affordable to ordinary people." Many feel that the anti-apartment arguments are elitist.

In the emerging din, where the pressure to change Chandigarh to keep up with the times and population pressures is growing stronger, voices of those like M.N. Sharma scarcely get a hearing. "If cities like Rome or Paris can retain their architectures and grandeur, then why can't we? This is the only city built after independence. Chandigarh was never meant to be like other cities. Let it be."